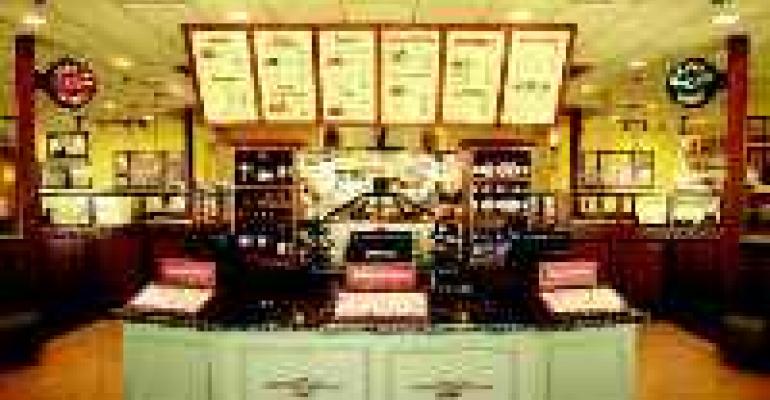 Updating with Savvy and Sizzle

Afew decades ago, customers could walk into your restaurant, look around, be shown to a table and still remain clueless about the type of cuisine they were about to order. Visual cues such as open kitchens, wood-burning pizza ovens, sushi bars and display cases of signature sauces, breads or desserts were not prevalent. The decor often didn't give too many hints, either.

Today, when it comes to redesigning existing restaurants, it's food to the forefront. Visual cues, food colors, aromas and cooking activities are all part of the design. Customers can see and smell steaks being grilled, or fresh ingredients on display. The question is, when you're putting a new face on your restaurant, how do you retain the positive equity you've built, yet make it clear to customers that something is new?

Barbara Churchill, partner at Louis & Partners Design in Bath, OH, explains today's restaurant climate: "It's an extremenly competitve arena, and there's less differentiation in the middle, between fine dining and independent casual restaurants. Customers don't necessarily say, 'I'm going to a casual dining or a fast-casual restaurant.' They're deciding on quality, price, the kind of food and the kind of experience." The experience, she says, is all about branding, differentiation and creating something that customers will like.

Recently, the firm provided a branded remodeling and prototype design for the 1,200-unit franchise operator, IHOP Restaurants. According to retail design director Kara Alvey of Louis & Partners, the interior revitalization included incorporating IHOP's signature blue on many levels (the glass around service stations, countertops, the trim on walls), but also adding wood-look tables, lighting that has a handcrafted look and different levels of seating. Changes were made to the exterior as well.

"The worst fear with a rebuild," Churchill advises, "is that you spend money on the interior and customers don't know anything is different." She continues, "One of the things we did with both IHOP and Sizzler was go with the brand as it exists in the minds of customers today. You've got to find out which components are working, and get rid of the ones that aren't."

Since, 1958, steaks have consistently sizzled at the Sherman Oaks, CA-based Sizzler USA. Recently, Louis & Partners Design provided a reimage program, including interior and exterior remodeling, new menu board design and graphics. "At Sizzler," Churchill says, "it was all about food. Opening the view to the kitchen, the salad bar, the USDA steaks and food graphics¯ideas that express the fact that they are grilling steaks." Sizzler USA now has more than 200 company-owned and franchised units around the country. Its menu includes grilled foods, sizzling platters and a salad/soup/appetizer/ dessert bar with more than 90 items.

As Churchill sums up the reimage program, "You can't stay where you are and still expect it to work 46 years later. The idea was to get back to the grilling roots of the restaurant, and the menu initiative was concurrent." The remodeling program involved existing franchised units, as well as considerations for consistent new construction. Sizzler unit remodeling began in 2002, and new units were built in 2003 and 2004.

Alvey explains some particulars of the new design. "We wanted to emphasize grilling. Originally, the interiors were green, stark, masculine interiors." Beer and wine are available at Sizzler, and that too has been emphasized. "We added graphics to communicate that," she says.

"We came in with rich, brighter colors-yellow, terra cotta, olive green." Besides the use of food colors, she says, "We added some stone elements, and warmed it up. Where we could, we opened up the kitchen so the smells could come out into the dining area, and so you could see what was going on back there."

The exterior was changed as well. A lattice unit was added to the front of the building, and signage was presented against a yellow backdrop. "Sizzler was known for big green roofs," Churchill notes. "The background of the signage was green¯green on green, with nothing to make it pop." On the exterior, she points out, just the use of paint, light and color make it look like it's a different building.