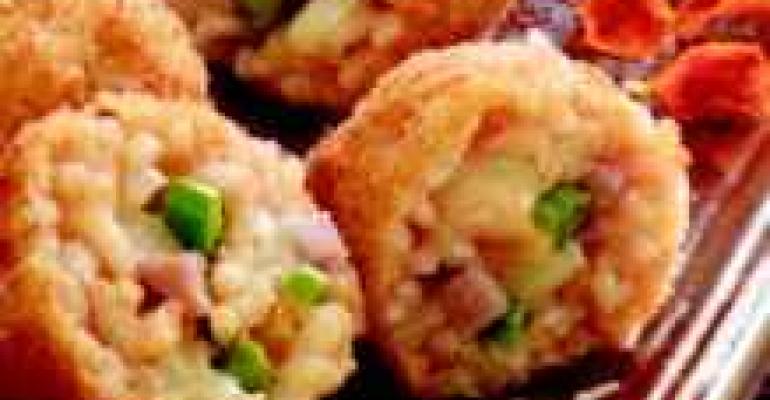 Tapas, antipasti, meze, antojitos, cicchetti—call them what you will, small plates are making a big impact on menus. Last fall, San Francisco Chronicle restaurant critic Michael Bauer observed the Bay Area alone had 25-30 small plates places, and he predicted more were on the way. While San Francisco is arguably on the leading edge of this transformation, operators across the country are often dishing up smaller portions in response to customer demand.

Small plates aren't likely to replace the tried-and-true appetizer/entrèe/dessert ordering tradition, but more diners seem interested in reinventing what defines a meal. At the same time, more restaurants are incorporating less generous offerings as a way to encourage incremental business.

Choice may be the biggest influence driving smaller portions. "Often, people don't want to sit down to a meal, they want to eat light and have a couple of glasses of wine," says Tom Catherall, owner of Atlanta's Here to Serve Restaurants, which operates Twist, Noche and other themed establishments with menus leaning heavily on the small. At Noche, where the entrèe-centric menu was recently revamped to include up to 50 small plate choices for $4-$6, guests typically order four to six small plates apiece. Sales nearly doubled within one year and the check average increased about 25 percent as a result of the shift in focus.

"People would rather have small tastes than a big plate of one thing," Catherall observes. Eating this way also minimizes the risk of regret over an order. "If you go out to dinner and order a salad and the $35 veal plate, and you don't like it or it's overcooked, there you are: That's your dinner," says Quinn Hatfield, co-chef at Cortez, a hot San Francisco tapas destination. "With this concept, two of you share five or six plates, so if something comes your way that you're not in love with, there's another one right behind."

Not only do small plates give patrons more control over what and how much they eat, they also accommodate those who need to watch their spending, but still enjoy good food. "You can have a piece of tenderloin for $7 or two lamb chops for $9," says Jose Andres, chef and partner with Proximo Restaurants, which runs three tapas-heavy Jaleos; Oyamel, which serves antojitos (regional small plates from Mexico); Cafè Atlantico, a Nuevo Latino concept; and Zaytinya, serving meze, all in the Washington, DC area. Andres says a key factor in the popularity of smaller portions is that they make expensive ingredients more accessible—it's affordable luxury a la Starbucks.

That's been the case at Philadelphia's Tangerine, where a new meze menu rolled out to coincide with a newly renovated lounge has been a big hit. "We were offering the full menu in the lounge, but it's low tables, low lit, very sexy, and the tendency is to lean over small tables. The idea is to force people to have conversations," says Todd Fuller, executive chef of the Stephen Starr-owned operation. The menu lists about 20 items—house-made salami, imported bocarone, smoked feta, shaved prosciutto, roasted peppers, grilled octopus—for $5 each; the price drops with the number of dishes ordered.

"We're absolutely getting incremental business," says Fuller. The meze menu makes a booked-solid restaurant with a $46 check average seem a little less daunting to the would-be customer. "This has definitely opened it up to people who walk by and see that it's busy but know they can get out of here for less money," he says.

For Tangerine and other restaurants, serving what amounts to an extended bar menu encourages drop-in business during otherwise slow dayparts. Tangerine is looking at keeping the lounge open for longer hours to accommodate demand. Andres, too, says the small-plates style is ripe for growth during nonpeak hours. "Our concept allows us to be the perfect place for people to come at 4:00. When you're waiting for dinner or having a late lunch, it's the perfect moment," says Andres.

Small plates also encourage a festive atmosphere. At Wave, a seafood-centric restaurant in Chicago's W Hotel, refocusing to a shared small plates culture last year was a deliberate bid to attract the highly social 28- to 40-year-olds populating the lobby bar. "We wanted them to stay and have a more relaxed dining experience, not have us dictate when they're going to get their food," says Kristine Subido, executive chef.

It can be so social, in fact, that at Avec, groups of friends often wind up sharing the small plates experience with total strangers. Paul Kahan's casual Chicago wine bar, one of the pioneers in the small-plates mania that has swept the Windy City, seats about 50 at rectangular eight-tops and a long bar. The typical party shares Mediterranean-style plates cheek-to-jowl with one or two other parties doing the same. Salumi, chorizostuffed and bacon-wrapped dates, grilled sardines, tapenade, pork shoulder and other delicacies have guests jammed up to wait for their piece of tabletop real estate.

"Instead of doing 300 plates, we may be doing 1,200 little plates," Catherall says. "There is more work, but the same amount of workers."

If that's true, it's probably because many items that make sense for small plates can be largely prepped in advance. At Tangerine, for example, one staffer handles the meze menu five days a week; Fuller looks for culinary students to help fill the gaps by plating the cold selections. "The line cooks, because of their experience, can handle the proverbial shit hitting the fan," Fuller explains. "The culinary students can't because they haven't been there. This provides them experience in the fundamentals of presentation without the pressure."

When Wave moved to a small plates menu, labor was redistributed into three lines: pantry and pastry, front and back line. "Prep time is minimal," Subido says. It has helped that the original 40-item menu has been trimmed to about 25 choices, and that the lunch menu, which had consisted of small plates, reverted to a more traditional style because of slow sales.

"We didn't have a history with small plates, so we've been finding a fit and doing a little experimenting, " Subido explains.

An enoteca (a 35-seat indoor piazza and a 75-seat wine bar) on the premises at Osteria via Stato offers a cicchetti menu to complement the wine choices, and preparation is relatively simple, says Scott Barton, a partner in the new Chicago family-style Italian restaurant with LEYE. "A lot of things are already prepared. If someone orders Parmigiano-Regggiano, that's nothing more than carving it out of the wheel. A lot of other plates might be prepared in advance and served at room temperature. They don't necessarily have a lot of composition to them—that's the key."

Sometimes, all those little plates can add up quickly. At Rathbun's, an Atlanta restaurant that divides its menu into small, raw, big and "second mortgage" plates, the 20 small plates selections were designed to encourage multiple orders, draw in local college students on a budget and fuel repeat business But patrons sometimes lose sight of the value proposition for the items, priced from $4-$7.50. "It's like sushi. You order this and this, say 'send us more of those,' and all of a sudden your bill is $100 for two. You don't realize how much you're spending," notes Kevin Rathbun, chef and partner.

From a food cost standpoint, small plates offer some potential to yield higher profit than more traditional choices. Wave's Subido has found food costs dropped with portion sizes for one key reason: less need to purchase full portions of protein. Small servings of shellfish are standing in for an 8-ounce piece of tuna, for instance. And even if the cost is the same, as it is at Twist, where Catherall divides an $18 entrèe portion of sunburned tuna on ancho mashed potatoes into three tapas-size portions and sells them for $6, "we end up selling a lot more tuna," he observes.

Profitability for small plates, says Randy Zweiban, executive chef and partner at Chicago's Nacional 27, "is like anything else. It depends on what the product is. The crab cake is not going to be as profitable as the pork. It really depends on what's going on in the dish—it's all got to balance out." He says perceived value is more important to the guest. Menu prices at the pan-Hispanic Nacional 27 run from $2.75 for a sofrito-marinated chicken skewer up to $9.95 for blue crab chilaquiles.

Food costs can be lower, but not always in proportion to the menu price. Cortez's Hatfield says that trying to offer the highest quality ingredients at a higher-than-average price point (checks average $65) has met some resistance. He attrributes that to a public perception that small plates are a cheap way to eat. "The difference between a small plate and an entree might be made up with lower-cost ingredients—more vegetables and other things that are cheaper. It's tough for us, because a lot of what we offer is made up of protein," Hatfield says.

Guests sometimes need a little nudge to get with a small-plates program. Often, menus carry a short intro explaining the concept and suggesting how many plates a party should order to feel satisfied. Henry Salgado, chef/owner of the Spanish River Grill in New Smyrna Beach, FL, says his tapas menu, with dishes priced between $4-$7.50, is "very easy to explain: We say they are small bites, maybe a couple of bites a plate. Once you say that, they're an easy sell."

Fuller says an enthusiastic staff has helped fuel sales of even the more unusual meze offerings in Tangerine's lounge. " Because the bartenders and lounge servers are into it, they sell it to people who normally wouldn't eat," he says. "You get some food in your stomach, then you drink more, and it becomes more of an event. The main items—the roasted peppers, marinated olives, prosciutto, fried calamari—those are what sell. But we consistently are getting people to try things that they're not familiar with, too."

Some parties need a little help pacing the order as well. "We never encourage people to order all at once," Andres says. "We suggest getting one round and waiting to order the next one."

One way to expose the unitiated is through special events; New York's Suba, for example, features wines and tapas from each region of Spain during monthlong promotions. "It's a good way to show off things that no one has tried or is familiar with," says chef Alex UreÒa. Suba also uses holidays to showcase its tapas: recently, the restaurant served a special $95 "14 plates" menu for Valentine's Day.

Aside from San Francisco and a handful of other big cities, can other communities support small plates concepts? It would seem so. At Andina in Portland, OR, for instance, a broad menu of Peruvian staples, many of them offered in portions designed for easy sharing, has won popular and critical acclaim for chef Emmanuel Piqueras Villaran.

Tangerine's Fuller thinks the idea of small plates should be universally appealing. "This is an easy way to advertise eating better—you eat less and at a more leisurely pace instead of jamming what you think is an appropriate amount of food down and feeling comatose 30 minutes later," he says. Who can argue with that?