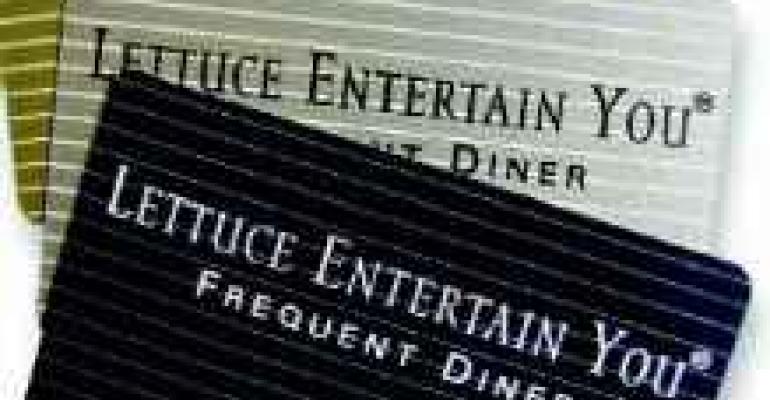 There's an old axiom that says it's easier and cheaper to hold on to customers you already have than it is to find new ones. This saying is even truer today, as more than 900,000 restaurants across the U.S. vie for Americans' appetites. A solid operation that delivers good food and good service is the best way to encourage repeat business. But, as many restaurant operators are finding out, coupling good basics with some simple techniques to reward existing customers can also give you the edge when it comes to repeat business.

The airline industry began rewarding its frequent fliers in the 1980s and since then, nearly every industry providing retail goods and services has joined the fray. Most programs, based on points awarded for customer loyalty, are self-administered or outsourced. But such elaborate programs, in which loyalty cards are swiped or scanned, is not your only option. It is your best option, though, if you want to track frequency and build a customer database.

Nevertheless, operators often prefer low-tech guest rewards systems, says Joel Cohen, of the Cohen Restaurant Marketing Group in Raleigh, NC. They are much easier to manage and can be ended, for any reason, without much trouble. Low-tech loyalty programs, such as those using wallet-sized punch cards or stamp cards, can end when the operator simply stops issuing new cards, says Cohen. The key, however, is to honor the cards already issued.

Whatever type of reward program you choose, there are some other guidelines to follow. The first is that the reward should be valuable. "Rewards are a great motivator for frequent visits, but only if the reward is worth it," says Cohen. "In casual dining, a free meal is a good reward. Five dollars off a meal is not because people are much savvier these days," explains Cohen. "They know when there's a value and when they're being conned."

The reward must also be attainable. Ten visits to earn a free meal is attainable. Twenty is not. Cohen reiterates, "Guests have been spoiled by the airlines' frequent flier programs, so they know a good deal when they see one."

Lettuce Reward You
Chicago-based Lettuce Entertain You Enterprises (LEYE), a multi-concept operator whose restaurants include Shaw's Crabhouse, Maggiano's and Wildfire, has 130,000 guests (about 75,000 accounts) enrolled in its frequent diner program. The goal of the program, of course, is to increase the frequency of guests' visits. Brent Carter, Frequent Diner manager, says, "From the time they enter the program, and progressively thereafter, we see that the number of visits (of program members) does increase. You're trying to develop loyalty from your customer base, trying to get them to interact more regularly with your company."

LEYE, one of the first restaurant companies to get in on guest reward marketing, borrowed the idea for the 15-year old program from the airlines, Carter says. LEYE has even found that customers will gladly pay a one-time $25 enrollment fee ($10 outside Illinois) to enlist in the program, which rewards them one point for every dollar they spend at the restaurant.

Guests accrue points at all Lettuce restaurants, and LEYE mails them quarterly statements. Prizes vary, from a $25 reward certificate for 350 points to the 21,000-point prize—a catered dinner at home. Lettuce is pleased with the participation level of its existing members. About 45,000 of its 75,000 accounts have had activity in the past year, and LEYE is in the middle of a campaign to sign up another 6,000 to 8,000 members.

LEYE servers are given incentives to sign up those guests who are not yet enrolled and promotional materials are tucked into check presenters. 2005's total new membership in the program is expected to reach about 10,000, raking in more than $200,000 in new membership fees alone, and more importantly, resulting in untold numbers of repeat visits as guests try to earn rewards.

Mega Mondays
Outside Pittsburgh, Northpark Lounge Clubhouse, a family dining and game concept, turned desolate Mondays into profitable ones, serving up 400 entrees each night. Co-owner Greg Maggio credits his MVP (Most Valuable Patron) Club for the boost. "I don't see how we could afford not to have this program," he says. "As an independent you need an edge like this to compete." The club, costing $25 the first year and $15 each subsequent year, issues rewards after a certain dollar amount is spent, but members also receive valuable incentives six nights per week, including 2-for-1 game tokens, free kids meals, and buy-one-getone-free entrees.

The MVP Club is self-administered, using a frequent dining software program from Aloha Systems, but Maggio cautions operators to think through the labor involved before jumping into a frequent dining program. Office managers at each of his restaurants, he says, spend about 50% of their time managing the MVP Club. He has decided that the program is a "labor intensive, but worthwhile."

In the end, Maggio says, "The goal was to make it hard for our customers to go anywhere else."