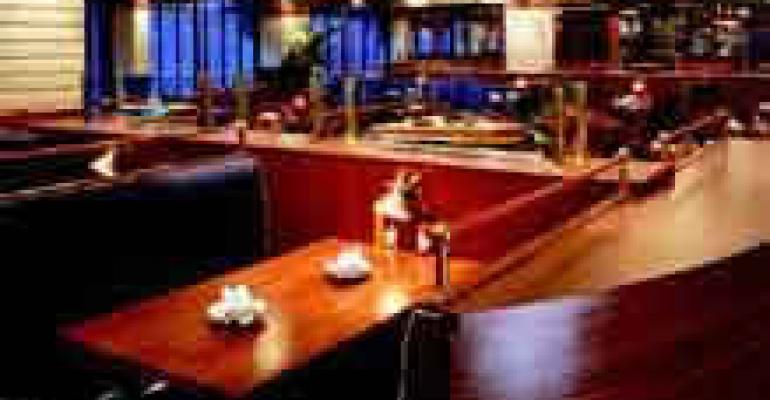 Cameron Mitchell has spent the last decade carving out his own Lettuce Entertain You-like niche, opening 24 restaurants reflecting a handful of distinctive themes in Midwestern locations. But it wasn't until 2002, inspired by Jim Collins' book, Good to Great, that he decided to take one of those ideas on the road in a big way.

Collins' bookñwhich Mitchell read together with other members of his executive team—counsels focusing on the part of the business best described by three questions:

What are you passionate about?
What has a great economic model?
Where are you a market leader?

The exercise pointed down a clear path. "We said, 'we think we do seafood better than anyone,'" recalls Mitchell, president of Columbus-based Cameron Mitchell Restaurants. He could see that the company's two Columbus Fish Market sites, open since 1998 and 1999, were already doing a healthy trade. From then on, the company shifted its resources into expanding the brand, renamed Mitchell's Fish Market, and designated it the new company flagship.

Soon after, Mitchell's opened locations in Cleveland and Birmingham, MI that were instant hits, Mitchell says. Before going much further, management decided to take a step back and scrutinize the concept.

"We said to ourselves, 'if we're going to bet the future of the company on the Fish Market concept, let's go through a branding exercise and really try to understand the brand and what guests' needs and desires are,'" Mitchell says. That exercise entailed doing focus groups and surveys, dissecting the lowest and highest volume stores and hiring a design firm, Knauer, Inc., to consider how the interior design appeals to the core audience (see box on p. 58).

"Now, I feel like we're hitting on all cylinders," Mitchell says. Besides posting impressive numbers (unit sales average $4.7 million), Mitchell's has won kudos as the best seafood restaurant in the markets it serves. The concept has refined its core target audience (highly affluent densely populated suburban and urban areas), which will simplify the site selection process.

A Fresh Obsession
With its focus on a highly perishable food category, it's no mistake that purchasing and prep are almost a religion at Mitchell's Fish Market. "We like to say we're obsessed with freshness," Mitchell explains. Also, apparently, with variety: With an 80-item menu listing at least a dozen fresh-caught species, "if it swims, chances are we have it."

Mitchell's buys from carefully selected sources around the country and spends a bit more to buy premium quality. As Cameron Mitchell likes to observe, "Good fish isn't cheap, and cheap fish isn't good." With orders totaling more than a million pounds of fish a year, he ought to know. Despite the premium, food costs hover around 34 percent.

Handling is crucial. When seafood deliveries arrive, they go straight into a walk-in cooler; from there, they go to a dedicated fish prep kitchen, where the thermostat is kept at 33 degrees— optimal for preserving freshness. Seafood is kept on shaved ice and, once prepped, it lands in deli cases, also at the proper temperature, and left on prominent display for patrons.

The deli counter display is one element of an in-your-face barrage of design elements stressing freshness. It's the reason why one wall of the chilled kitchen is lined with big windows facing into the dining room. It's also why the raw bar is front and center. "By the time you get to the table, you know you're in a great seafood house," Mitchell explains.

"We knew we were obsessed with freshness, but we don't think our customers knew it," Mitchell continues. "Now we try to hammer it home every chance we get. We think it's a point of difference."

Building on a Happy Staff
Mitchell likes to say that another point of difference is the company culture. "We all have one goal—to make raving fans out of five groups: guests, associates, purveyors, partners and the community," he says. But perhaps the most important group is associates. At Cameron Mitchell Restaurants, the philosophy is that treating associates well will result in superior customer service, which will fuel repeat business and result in higher profits.

Training gets considerable attention, and with a new training director on board, Mitchell expects that focus to increase for the company's roughly 2,000 employees. "We spend a lot of time training people how to think, not what to do. There's no standard operating procedures manual that covers everythingñinstead, we spend a lot of time teaching our values and culture," he says.

To maintain company wide consistency, each group of six restaurants is overseen by a regional director and corporate chef. Distributing responsibility that way allows the area management to be more involved in running each restaurant more effectively. Still, Mitchell admits the restaurants in Columbus always score slightly higher on customer core value surveys than those in more remote locations; that's something he'd like to rectify.

So far, Mitchell's Fish Market has grown through internal cash flow, landlord tenant improvement dollars and equipment leases. Mitchell doesn't expect that to change, and he's not entertaining the idea of launching a franchising organization. Nor does he see any ownership changes for the limited partnership on the horizon. "Our goal is to stay privately held for as long as possible and see how far we can go," he says.