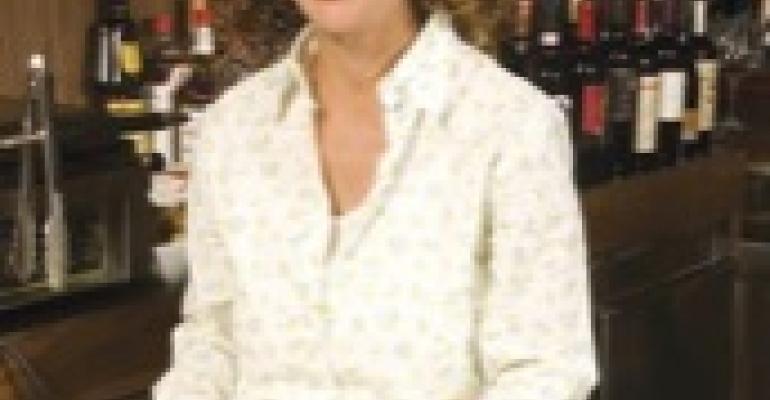 Nancy Silverton, one of the Los Angeles Times' "100 most influential people in Southern California" (and the only chef on the list), has opened the warm, inviting Mozza. The determined innovator started La Brea Bakery in 1989, making artisanal bread accessible throughout Los Angeles. In 2001, she sold the company for undisclosed millions. Her introduction of Sandwich Nights at Campanile (previously co-owned with Mark Peel), Antipasto Nights at La Terza and Mozzarella Nights at Jar initiated a trend across the city and added a new dynamic to midweek dining. The highly anticipated Mozza has been bursting with Silverton's followers since the doors opened. RH contributor Libby Platus spoke with the wiry, always-in-motion Silverton.

RH: How would you describe your new venture with partners Mario Batali and Joe Bastianich?
Silverton: Mario and Joe have come to the West Coast for the first time. We have actually opened two restaurants that are connected. They are both called Mozza: Pizzeria Mozza and Osteria Mozza. The whole impetus behind the Osteria is the Mozzarella Bar.

RH: What was the inspiration for the Mozzarella Bar?
Silverton: A couple of years ago a fellow chef, Jeremiah Tower, visited me. I made him lunch, a beautiful little spread with fresh mozzarella, different cured meats and some condiments to go with it. He said, "I can't believe this is so delicious! What a great idea!" He had just been to Rome and had seen a similar idea in a bar format. So I visited that restaurant, Obika, in Rome. It's like a sushi bar, except they prepare very little in front of you. They have big tanks of mozzarella from several producers. When I got back to L.A., I began doing Mozzarella Night at Jar. It was an immediate hit. An example of the combinations I served might be an over-easy egg on toast covered with luscious melted mozzarella topped with spicy harissa sauce.

RH: Are enough types of mozzarella available locally?
Silverton: My purveyor provides more shapes than types of mozzarella, such as bocconcini, or "the mouthful," is quite small; burricotti, which is ricotta-stuffed mozzarella; stracciatella, pulled curds with extra cream; and burrata; a smoked mozzarella. It's difficult to import very perishable cheese from Italy because of the travel time.

RH: You plan to spend time working at the Mozza Bar in Mozza Osteria as you did at Jar. Is the real draw for you interfacing with the customer?
Silverton: I love interacting with people and am much more comfortable talking to people I don't know when I am preparing food and pleasing them.

RH: Do you now consider yourself a savory chef, as well as a pastry chef and bread maker?
Silverton: I started my cooking career as a cook, not a pastry chef. I went to the Cordon Bleu and was much more interested in cooking than pastry making. When Michael's first opened, it was a new, hip restaurant in Los Angeles. I wanted to work there so badly, but the only availability was pastry. My feeling was, I'll get my foot in the door and hopefully, move over to the savory side. However, I never left pastry. I'm not a confident savory cook, and would never claim to be a restaurant-quality savory chef. But I do like to put combinations together. Also, I do have a vision, and I'm good at walking people through how I would like something to be. Sometimes that means they will do the butchering, because I am not a butcher. I'm a good assembler and finisher. I'm a great salad maker. Those are my specialties.

RH: Do you develop menus with Mario?
Silverton: As far as the menu itself, it's been more a collaboration between chef Matt Molina and myself, with us sending it on to Mario. We lay the groundwork and he finishes it off. Mario will be here and he'll cook here, but this is for Matt, David Rosoff, the manager and me.

RH: When you started La Brea Bakery, you had a dogged determination to figure out how to make a superior artisan bread. Did you use that same process to create the crust for your new pizzas?
Silverton: Yes. I have come up with what I think is a fantastic crust. It was the idea of having a pizzeria that sold me on this location for our restaurant. I have always wanted the excuse to learn how to make a great pizza. I do better when I'm under pressure for my business rather than just sort of figuring it out myself.

RH: Reports of the La Brea Bakery sale ranged from $55 million to $79 million.
Silverton: The amount is not something I want to discuss. None of the figures have been correct. Everybody assumes that I was the sole owner. I was a pinpoint of an owner! We had several investors and we had to pay off loans because of the bakery we built in Van Nuys.

RH: But you still probably have some sort of nest egg and don't have to open another restaurant. What made you decide to start again?
Silverton: Owning, operating, cooking in a restaurant is my life! There was no question.

RH: Prospective investors were offered a chance to buy into Mozza at $100,000 a share, a record offering for Los Angeles, where most restaurant's shares have been $25,000-$50,000. What will investors receive in return for this show of confidence?
Silverton: When you are raising money for any kind of business, you can decide share size. Mario and Joe had only a few investors for Del Posto. Their other restaurants were done without investors. Chefs like Joachim (Splichal of Patina Group) prefer shares in a restaurant to be very small so that there are many "mouths" to spread the word and do the PR for the restaurant. Mario and Joe feel more investors have more opinions. What investors get is what they would get if their share was $25,000, but less diluted. They will get all their money back, 100 percent with interest. After that, the partnership flips, we will then own 70 percent and investors 30 percent.

RH: Your books on breadmaking, pastries and sandwiches are all very popular. Will a pizza book be next?
Silverton: I don't know. Cooking pizza in a wood-fired oven at 700-800 degrees is not something you (can do) at home! My newest book is A Twist of the Wrist: Quick, flavorful meals using bags, boxes, jars and cans.

RH: Do you have plans for a television show?
Silverton: No. They tape five shows a day. I don't know if I could have the same enthusiasm for show five as show one. Spacing tapings sounds a little bit more interesting.

RH: When Campanile became successful, you were asked if you would open a second. Your answer was a decisive, "No! What makes a good restaurant is that the owner is there!" Your partner, Batali, owns many. Is Mozza a prototype for future restaurants?
Silverton: No! I still feel that I'm opening a restaurant because I want to run a restaurant and want to be here. I don't have any plans for growing.