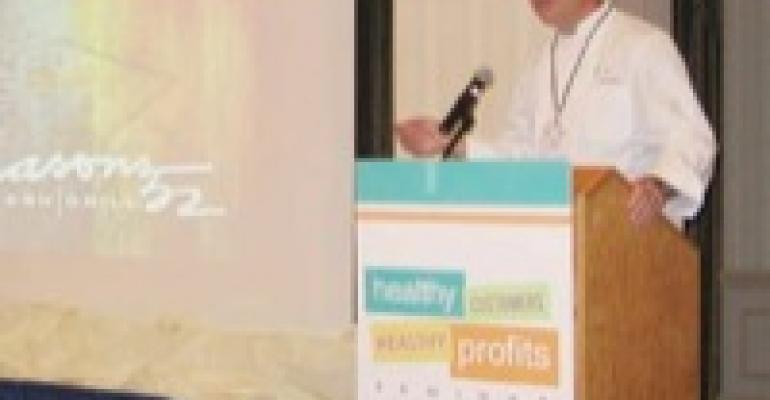 When Darden Restaurants debuted Seasons 52 several years ago, it did not want anyone to think of the brand as a health restaurant. History informed its leaders that any such positioning could be the kiss of death. Instead, it adopted a "stealth health" philosophy. In other words, offer good, flavorful food that happens to be good for you.

According to keynote speaker Cliff Pleau, Seasons 52's corporate chef and director of culinary development, the overall goal was to create a menu where great taste was the prime directive, and no offering would lead guests to believe they were making a sacrifice or deprivation.

"There's a lot of people out there who believe if it's healthy, they are not going to like it," he explained. "And you also have to keep in mind when creating a menu that your customers' interest in nutrition varies."

Pleau's position was supported by several other speakers who argued that this growing health movement among consumers is not going away. In fact, those in the industry who do not recognize its importance are in jeopardy of getting left behind.

RH Editor Michael Sanson further defined the point. "It's all about offering your guest choices. Nobody is suggesting that you get rid of indulgent items on your menu," he explained. "But along with those menu favorites, offer a number of healthful, great-tasting options for those who are looking to eat healthfully. If you can do that, you'll win the game."

At Seasons 52, Pleau has upped the ante far beyond what most would take on. For example, every menu item is seasonally inspired, nutritionally balanced and contains no more than 475 calories. The key, however, is that no one would ever believe they are giving up something after tasting the food.

The Season's 52 approach requires an operation to have a chef with the talent and knowledge to create healthful, great tasting food. While far too many restaurants lack that level of talent, a more approachable goal is to offer "better-for-you foods." In other words, offer your macaroni and cheese, but cut back on the fat.

To cut back on fat, Pleau said all oils in Season's 52 kitchen are in a spray bottle. This simple little approach not only helps limit the amount of calories that go into recipes, it helps keep food costs down by controlling how much unnecessary olive oil chefs splash around.

Season's 52 has also adopted another tack, one that's gaining popularity across the country. Instead of cutting back on fat, cut back the portion size. That works particularly well for desserts. "If you order a dessert at Seasons 52, you're going to get it with all the indulgence that was originally intended, but we are going to give you that dessert in a shot-glass type container where you can have two or three bites. It satisfies most people and they're happy they ended the meal with a sweet without all the calories."

The desserts are presented at the table in a caddy that bundles four of them together. A customer can select just one or order them all, which works well for a group. In most cases, customers order them all. It's a win-win for everyone.

At Acadiana restaurant in Washington, D.C., the menu revolves around authentic Louisiana recipes, which Chef de Cuisine Christopher Clime prepares using a contemporary, urban approach. Can he bring in every recipe under 475 calories?

Hey, it's Louisiana cuisine. Get real. But, Clime does manage to cut back dramatically on the calorie counts of many recipes by reducing on how much fat he uses, by employing alternate cooking techniques and by increasing the flavor level with just the right amount of spices.

"If you're going to pull back on calories, you have to increase the level of flavor. An experienced chef should know how to do that," explained Clime, who was recently named one of Washington's "Top Ten Hottest Chefs" by DC Style magazine. "If the people in your kitchen can't create healthful menu items that are also flavorful, then you may need to think about making a change."

Speaking about change, the more healthful approach to cooking at Acadiana came from Jeff Tunks, the corporate chef for the restaurant group that operates Acadiana, D.C. Coast, TenPenh and Ceiba. Tunks' weight had gotten dangerously out of control, so he put himself on a low-fat diet. He eventually lost more than 120 pounds, and decided that his restaurant menus should also go on a diet.

"It's all about choices," said Clime. "Some of your customers want to indulge, while others are looking for better-for-you options. As a chef, I strive to make everyone happy."

"If you give kids interesting food that's been seasoned well and cooked well, they're going to love it," he explains.

Bobo has "reeducated" the palates of thousands of the school's kids, who now clamor for menu items such as rutabaga fries, steamed kale, brussels sprouts, roasted fish filets, hummus and teriyaki-roasted tofu. His efforts to offer better choices are motivated by some startling statistics. More than 27 million kids in this country have high cholesterol and 33 percent of kids born in the last five years are predisposed to diabetes, obesity and high blood pressure. Perhaps the most starling statistic is that for the first time in this country's history, kids born today will not have a lifespan greater than that of their parents.

Chef Bobo, who was an instructor at the French Culinary Institute, said everyone in the foodservice industry must help develop kids' palates now so they will understand taste and quality when they become adults. To do that, he suggests serving foods with bold flavors and vivid colors, and employ steaming and roasting techniques as opposed to frying. He said kids also love soups, so add them to your menu. The ones he serves at Calhoun are 90 percent vegetarian and all are made fresh with big chunks of vegetables. Soups and vegetarian chili, another favorite, are also great ways to use leftovers.

Of course, kids also love chicken, which he roasts and serves with sauces like salsa verde or tomato chutney. Chicken curry, chicken tacos and chicken jambalaya are also favorites. To round out his menu, he serves lots of whole grains, including whole wheat pastas and whole grain breads and wraps for sandwiches.

If you adopt some of these techniques, says Bobo, you'll not only help improve the health of kids, you'll also run a more cost-effective operation. You'll have no separate food ingredients for kids because you'll be serving them the same menu items as adults, but in smaller portions.

"Kids are our future and they are worth the effort," he said.

Turenne, who once oversaw the foodservice program at Yale University, said human health can't be maintained without eating nutritious food, and you can't have nutritious food without maintaining healthy soil, clean water and healthy plants and animals. To achieve this end, the country must adopt a sustainable food philosophy, which is based on the belief that food is best produced by small to midsize farmers who are as local as possible and who commit to the vitality of the land, their livestock and their workers.

The sustainable philosophy is not based on a new-age, tree-hugging mentality, he said. It's the way this country once prepared food. It simply means that you should respect the seasons, use whole, simple ingredients, recipes and menus and establish and build relationships with local growers.

"You can't do everything at once," he explained. "But you can commit to progress in aggressive, yet manageable steps. Even if you don't have access to everything local, you can act that way."

He suggested you rewrite your menu and remember that less is more. And continually adjust and improve your menu and nurture your staff to manage costs. Assign a staff member to be a champion, said Terrene, and include everyone in the process. "Teach why as well as how and you'll make a difference."