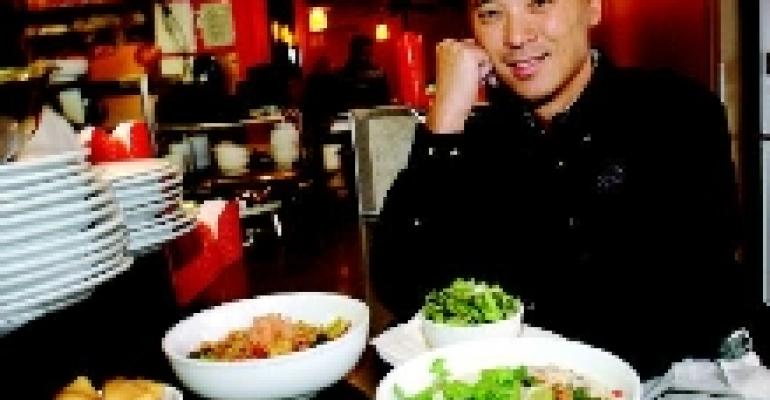 It isn't every day that a heavyweight like Dick Rivera decides to back a relatively unproven concept. But the former Darden Restaurants president and COO was so smitten by Doc Chey's Asian Kitchen that he signed up to build 15 of them himself.

In Doc Chey's, Rivera saw an affordable, fun pan-Asian restaurant that's designed to function as a modern-day diner of sorts. Founder and owner Rich Chey's idea was to transport a typical Asian noodle house (in Japan, it's the equivalent of the traditional American diner) and position it as an affordable neighborhood option, the kind of place people might visit three or four times a week and eat cheaply and quickly.

Instead of chowing down on burgers, grilled cheese or eggs over easy, though, guests can dip their chopsticks into fresh basil rolls, miso salmon, massaman curry and pad Thai. Interiors include shared tables and counter stools, along with an exhibition kitchen to showcase the fresh preparations. A newer prototype includes booths as well.

Modern Flavors
Chey, a Wharton MBA whose prior restaurant experience consisted of eating out a lot while growing up, started out in the bagel business in Atlanta, opening Highland Bagel Company in 1995. He hit on the idea of Doc Chey's a couple of years later to tap into what he saw as a demand for Asian tastes with a modern twist.

A native New Yorker, Chey was surprised when he moved to Atlanta to see that it lacked the deep ethnic food traditions he had taken for granted. The handful of restaurants in the one part of town with a concentration of Asian residents offered up "the typical Chinese restaurant experience: They're dingy, the server doesn't speak English, the menus are dirty; it's not a real userfriendly experience."

He decided Atlantans were ready for something more approachable. His mantra: "Bringing noodles to the people."

Chey launched the first Doc Chey's (the name is an homage to the medical professionals in his family) in 1997 in the yuppie Virginia Highlands neighborhood, which he noticed had "a lot of restaurants, but not a lot you could go to several times a week." Nothing on the made-to-order menu, heavy on fresh ingredients and bold flavors, topped $6. The new place also came with a split personality: fast casual by day, casual table service by night.

It worked, and gradually he opened three additional units in Atlanta (four others are in Vinings and Athens, GA; Asheville, NC; and Orlando). Checks average $9 at lunch, $12-$13 at dinner. Beer and wine account for 15-20 percent of sales. The eight open units average $1-$1.5 million in annual sales with 50-110 seats.

The target demographic for Doc Chey's is a well-educated, young, adventurous diner. So far, the concept has been a magnet for singles and couples in the 25- to 35-year-old range and their slightly older counterparts with kids in tow. Up until now, locations have been selected based on a combination of traffic counts and demographics for residents within a three-mile radius. "A lot of it is the feel, understanding the qualitative issues of the neighborhood," Chey says.

To accommodate its clientele, Doc Chey's employs an unconventional service style. At lunchtime, guests order at the counter and runners bring meals to the table, but a wait staff serves them in the evening. "It was a natural evolution from looking at markets and trying to determine what people were looking for during different dayparts," Chey explains. "At lunch, it's all about speed and price; at dinner, when you have a little more time, it's more about the experience." First-time guests may need a little handholding to understand the process, but with a high amount of repeat customers, having to explain how the food gets to the table is not really an issue. Chey has chosen to focus more on the experience—fresh, cooked-to-order, moderately priced food served on real dinnerware—and less on the way it's delivered.

That passion for freshness translates into making everything from scratch, including dumplings, spring rolls and sauces. "It's definitely more work, it takes more training and it's more expensive, but we think it's worth the extra effort," Chey says.

In the eight years since the first unit opened, the menu has evolved a bit. A relatively new addition, Doc's Favorites, lists some of the most popular specials that have appeared over the years. And the dim sum selections have expanded to give guests an option other than a bowl of noodles or a stir-fry dish. Specials are nearly always available and change every night to keep regulars interested. The entire menu is designed to be "nutritionally smart," which means a balance of protein, carbs and vegetables.

Careful Growth Plans
If Chey is hoping to expand the concept through partnerships with strong operators, he got an excellent start out of the gates with Rivera, who is opening Doc Chey's in Orlando and Tampa. Chey met Rivera through John Metz, Jr.—chef and co-owner of several Atlanta restaurants and owner of a contract management company—back when he was making bagels and Metz managed a cafè at nearby Emory University. One of Metz' partners regularly stopped by to pick up bagels for the staff every morning, and eventually Chey realized he'd never seen payment on the invoices he supplied with each order. So he called Metz and the unpaid bills turned into a running joke. Eventually Metz made good, but during the back-and-forth the two men realized they shared certain philosophies. When Chey opened the first Doc Chey's, Metz called his old pal Rivera and suggested he take a look at it. All three, Chey says, "hit it off from a values standpoint." The two friends agreed to become equity partners with Chey in 2004; both are board members and Metz is involved in menu development.

Now that Chey has tweaked the concept and found some heavy hitters to help expand it, his next challenge will be maintaining the brand's integrity as it branches out beyond Atlanta and the southeast. His first line of defense is to choose his partners carefully. Backing that up is a 22-week training program for new franchisees. A partner/owner, kitchen manager and another manager must shadow trainers at existing stores, working their way up to running the store before they open their own. "Our feeling is that if you're going to skimp on something, it can't be the training on the front end," he says. "Once franchisees get a store opened, they're worried about putting out fires. We want to send them into battle with as many weapons as we can."

That heavy commitment to training is perhaps the main factor in limiting how fast the chain will grow. This year, Chey expects to nearly double the number of units, with six additions, and for the next several years he allows that there might be 10 openings a year. He expects the main nucleus to remain in Atlanta, with growth occurring in concentric circles from there. New company stores will be financed internally and through an initial round of external financing this year.

With such a small portfolio, marketing and customer research are not really formalized yet. Promotion mainly takes the form of local store marketing, and the corporate culture stresses community involvement from the manager down. "We do a ton in the community," Chey says, "not just because it's the right thing to do, but it has also paid dividends." One of the biggest benefits, he says, is helping employees feel like they are part of the community. He thinks shared values are a big reason employees like working for the company. So is empowerment.

"We focus on the concept of doing the right thing," Chey says. "When you're in front of the customer, your job is to do the right thing, even if it's not the least expensive or easiest solution."

Why does Chey think he can succeed where others have failed? Mainly because he is realistic about the challenges he faces in running an Asian restaurant.

"This cuisine is a totally different animal than other cuisines," he observes. "Your supply chain is different because you're using some ingredients that you can't get through a mainline distributor, so you've got to pound the pavement. Cooking on a wok range is also different. People look at it and say, 'this looks like a sautè station with a different flame,' but it's not."

And he knows he has competition. "I think there are 30,000 Chinese and Asian restaurants in the U.S., a lot of mom and pops that do a nice job," Chey admits. To those doing a not-so-nice job: Watch out.