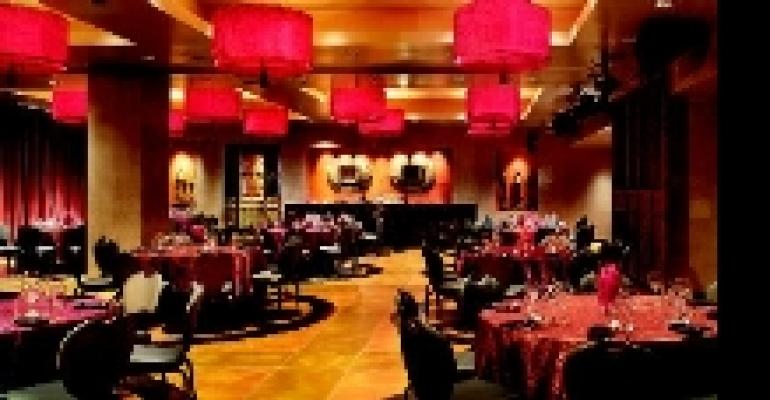 Turn Up The Volume

Catered events took a big hit post-Sept. 11, 2001 especially on the corporate side, but they are back, in a big way, and serious players in the restaurant business are gearing up to take advantage of that turnaround. Operators who understand the nuances of catered events and have the kitchen and staffing muscle to accommodate them appreciate the power of this incremental business and are aggressively going after it.

Catering is not just a mom-and-pop proposition these days. Top operators from Wolfgang Puck to Charlie Palmer Steak to Miami's Two Chefs have gotten into the game big time. Cameron Mitchell Restaurants, which only started offering catering services a few years ago to accommodate guest demand, has watched the business explode, doubling in the first year and by 80 percent in the last two years combined. And the owners of Tao, a 42,000-square-foot entertainment complex that opened in Las Vegas last fall, are betting that banquet sales will eventually drive as much as $10 million a year in business, with profit margins substantially above those in the 400-seat restaurant on the premises.

For independents, catering is a way to dilute the risk of operating a restaurant. Booking a group, either on or off premises, takes no more effort than taking a reservation for two or four, but the payoff is much greater. "It's also a good way to leverage the assets of the people we have in place and to build our equity in the brand and goodwill for our customer relationships," says Lindsay Schwartz, president and CEO of Schwartz Brothers Restaurants, which operates several Daniel's Broiler steakhouses and other restaurants in Seattle.

In Washington, DC, Charlie Palmer Steak recently expanded its private dining spaces to the point where the restaurant's capacity for private parties is larger than its regular seating capacity. It's a matter of giving the clientele—in this case, discreet business people and politicians seeking some privacy and a white tablecloth dining experience—what they want, says executive chef Bryan Voltaggio. "It's not necessarily more profitable, but it's one sale," he explains. "You know you will have 80 covers coming in for a party, and if you have that space, it will generate revenue."

Whether they are on site or at a remote location, catering jobs are more than simply setting a few more tables and firing additional meals. They demand a delicate balance of staffing, scheduling to avoid production bottlenecks, the ability to roll with the punches and more.

Cloning the Restaurant Experience
Charlie Palmer Steak has by necessity developed a system for making sure private groups have the same good experience as individuals dining in the restaurant. "We're really creative with our reservation book," Voltaggio says. Thanks to Open Table, the restaurant can get a list of its reservations in 15-minute increments. "We come up with a comfortable number, and that helps us gauge how many people to seat," he explains.

Meanwhile, private dining groups generally start with passed hors d'ouevres, which helps manage staggered arrival times and gives the kitchen a chance to get the meal started. Once the entire party arrives, the servers make sure that individual guests in the main restaurant have what they need so they can turn their attention to the group waiting to be fed.

Cameron Mitchell Restaurants, which catered more than 500 off-premises events last year, pulls from a team of up to 20 fulltime and 60 part-time employees in addition to regular employees at the company's Columbus-area restaurants. Staffers sign up to work online, at a website that posts upcoming jobs. Catering workers are screened to make sure they fit into Cameron Mitchell's professional-yet-friendly service culture, says director of catering Melissa Johnson, because the company wants to make sure its off-premises customers get the same experience as in one of the restaurants. The right attitude is especially crucial for catering clients, she adds, since "we're meeting their daughters and getting to know them on such a different level."

David Turk, a seasoned New York City caterer who teaches classes on catering, follows certain guidelines to ensure that events are properly staffed at both ends. "We have a rule of thumb for a plated sit-down dinner: roughly one person in the kitchen per waiter on the floor. Otherwise, the servers are just waiting at the door to the kitchen, or the food is getting cold."

Miami's Two Chefs has the luxury of a separate, intimate dining room equipped with its own fully functional kitchen that was once a cooking school and is now used to host groups. It's become a popular spot for cooking classes that give a group the chance to have fun helping to prepare their own meal. The space can accommodate up to 40 guests.

Tao was designed up front with the idea of accommodating groups. It's laid out on several floors, with a separate banquet kitchen, and the banquet space itself can be divided into multiple configurations. Groups can also rent out the lounge and nightclub separately. "It's designed in such a way so all of these venues could be their own entities. We can have four separate parties going on or open up all the doors and dividers," says Richard Wolf, one of the owners. "In many ways it's the ultimate space," he explains, because guests in the restaurant can enjoy their meals without being aware that a group is on site.

Contingency Planning
In an off-site situation, facilities and equipment planning is essential to a smooth event. Matt Prentice, CEO of Matt Prentice Restaurant Group, has dealt with brownouts, remote locations where everything, including power equipment, had to be trucked in, faulty thermostats that resulted in frozen deli trays and more. He set up tents to cook 4,500 meals outside of the kitchenless Cobo Hall one frigid Detroit January and was ordered by the fire department to remove the tents because he didn't have the proper permits. "Sometimes you have to be able to punt," he observes.

Turk says research and preparedness are keys to smooth events. "The single biggest mistake off-premises caterers make is not doing extensive research of the facility," he notes. "We have a 10-point questionnaire that covers the dimensions of the room, where the smoke alarms are, whether steps are involved, how far the plating area is from the dining area and more." His crews also transport an ever-evolving emergency kit with items that might come in handy.

For off-site events, restaurants that want to reproduce their menu often need to bring their own specialized equipment to be able to pull it off. Cameron Mitchell Restaurants prefers to avoid holding boxes, so the firm winds up carting in induction burners, butane burners, portable convection ovens, six-foot grills and other contraptions to get the job done. Many of Schwartz Brothers' clients want to duplicate the Daniel's Broiler experience, so the company invested in a customized truck fitted with a lot of kitchen equipment, including a grill used to finish off steaks.

The choice of dishes on a catered menu is another important consideration. Unlike a restaurant, where patrons must choose from the printed menu with some limited substitution, feeding a group requires more flexibility along with consideration to what is practical considering the size of the group, the budget and, in some cases, the establishment's reputation. "We have a saying: 'the answer should always be yes—for a price,"" says Schwartz.

Many chefs will bend over backward to make clients happy, but draw the line at requests to "dumb down" the cuisine. "We are not about pigs in a blanket or phyllo triangles," says Jan Jorgenson, chef/owner of Two Chefs. "We are a renowned and respected restaurant with a serious clientele who wants to make sure we do things correctly."

At Charlie Palmer Steak, the menus are often a scaleddown version of the restaurant's menu—with limited choices for several courses—to avoid overwhelming the kitchen. "If 75 people come in, we can't have them choose from 12 appetizers, otherwise the kitchen would come to a screaming halt," Voltaggio says.

Some foods on restaurant menus simply don't translate well off-premises. "Some fish lend themselves well to catering, while others do not; we try to use fish with a high fat content," says Prentice. "We would never do lake perch or dover sole for a catered event unless the guest insisted on it." Some things translate surprisingly well: The mashed potato bars and a fusion rice bar that are in some of Prentice's restaurants are popular options for catering clients.

Schwartz says his chefs like the challenges of dealing with customers' private event requests, but admits that the menus can be a challenge. "You have to be more flexible...in catering it's all over the place. Someone might create their own menu, and we have to be flexible enough to figure out how to do it and to make a profit."

Prentice also says it's important to make sure clients have a reasonable budget. "Sometimes people are unrealistic, and you have to be able to walk away from those type of events, because the host never looks cheap and the caterer always looks lousy," says Prentice.

Then, of course, there is the issue of quantity. Few faux pas are worse than running out of food, but there are solutions. "Be prepared to have a conversation: 'In the event your party ends up attracting more guests, especially if it's a lot more, how would you like us to handle it? Do you want us to go out and get more food— for a charge?'" Turk says. If the only food is hors d'oeuvres, have the servers pass them more slowly.

Despite the lure of extra income, catering is not always a good idea for restaurant operators, Turk observes. For one thing, he says, many fail when they try to turn out large multiples of meals all at once, something a restaurant doesn't typically do. Then there is the ego factor.

"I've seen too many cases where there is a sense of 'I'm better and different, catering is not something that I'm into.' There is an elitist attitude coming from the back of the house sometimes that does not translate well," Turk says.

But for operators looking at ways to fill in slow times or boost their annual sales, catering can be a godsend. "The Ford auto show (in January) is the salvation for one of the worst weeks of the year—it ends up being my most profitable week," Prentice says.