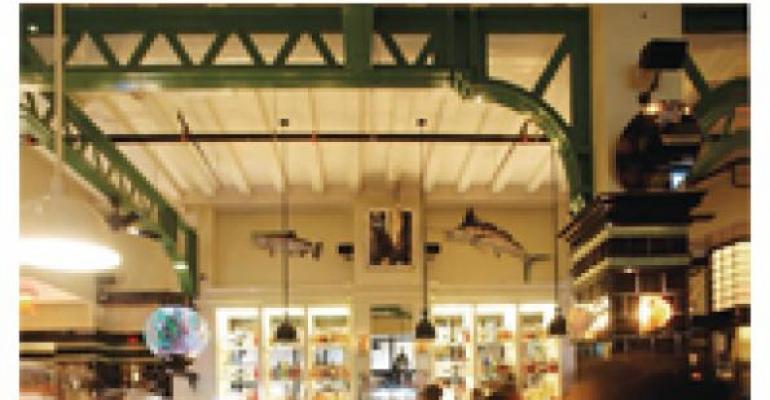 Much more than an afterthought, restaurants are taking center stage at the trendiest hotels.

A decade or two ago, hotels were not the first place you might expect to find a cool restaurant. In fact, many people wouldn't be caught dead in a hotel restaurant. The restaurant was considered an amenity for the hotel guests, a loss leader.

How the tables have turned. Some of the world's top chefs and the most cutting-edge concepts are the crown jewels of many hotel lobbies. Hotel operators, battered by a drop in travel over the last few years, now seem more open than ever to cutting a deal with operators, especially chefs and concept creators that will lend their property some cachet. As the story on p. 12 shows, a high profile isn't a prerequisite to finding a hotel partner. Today, outside-the-box thinking seems to be the key.

It's no mistake that this complex was designed to reach way beyond the standard issue Plaza guest; in fact, Plaza management studied the neighborhood and realized there was an opportunity for casual dining and food retail among office workers, tourists and residents.

English (winner of a Restaurant Hospitality Richard Melman award) took the self-explanatory route in naming stations at the Plaza Food Hall: The Ocean Grill & Oyster Bar, The Bakery, The Cheese & Charcuterie Counter, The Wine Bar, The Grill, Pizza, The Dumpling Bar and The Sushi Bar. Open kitchens scattered throughout the hall allow for interactive events such as wine tastings and cooking demonstrations with English and other visiting chefs. The Food Hall does catering for on- and off-premises events.

“Everyone is always on a schedule--whether they're in town on business running in and out of meetings or on vacation and trying to fit an entire itinerary into one weekend. Guests like to be able to grab good food and go without having to commit to a longer, more traditional meal,” Chodorow says.

Guests at FoodParc can place their orders directly with a cashier at any of the stands or make their selections from one or several stands all at once using 16 integrated touchscreen kiosks mounted throughout the space. They can track their order on overhead display panels or receive a text message on their cell phone when their food is ready.

FoodParc's space age look is no accident. Futurist, artist, illustrator and conceptual designer Syd Mead — known for his work on sci-fi classics such as Blade Runner, Aliens and Tron — conceived the space.

David Chang, who built a solid critical and popular following at his three minimalist Momofuku restaurants in New York, doesn't seem like the obvious candidate to create a hotel restaurant. A New York Magazine writer called an experience at one of Chang's places “the local culinary equivalent of a midnight rave.”

But Chang took the leap. At Má Pêche, in the midtown Chambers Hotel, there are no reservations, no tablecloths and no flatware (chopsticks appear in cups at the tables). Communal tables are made of recycled plywood. The five-section minimalist menu includes simple descriptions (e.g., carrots — bone marrow, chili lime; crispy pig's head — lentils, pickled apple, mustard) and no desserts. The subterranean space also incorporates a raw bar (not part of the original Momofuku concept). A “Beef Seven Ways” dinner, served to parties of six or more for $85 a head, was described by a New York Times review as “a punishing meal, deeply satisfying and utterly over the top.”

Downtown, Momofuku's reach was limited to the neighborhood and scouting parties by food pilgrims; at The Chambers' 56th street site, Chang is exposed to a much broader audience — and they are digging it.

Creating and operating a restaurant at a hotel isn't the only way to get into the game. Ask Eric and Bruce Bromberg. Their Blue Ribbon Restaurants Group recently sealed a deal with Marriott's Renaissance Hotels division to add selected items to menus at 20 of the chain's properties. Each hotel will be able to add up to a dozen Blue Ribbon items — including choices such as fried chicken wings, smoked salmon toast, fried rock shrimp and bbq pork sliders — to its menu.

Renaissance is counting on the Blue Ribbon brand, which isn't a household name outside of New York, to bring its hotels some cachet. “Rather than go the traditional celebrity chef route, we felt our guests would appreciate having access to a real in-the-know foodie brand like Blue Ribbon,” a Renaissance exec explained to Hotelchatter.com, a travel industry website.

Then there are the restaurants that basically overshadow the hotels — not a bad thing if you're the chef or owner. Arguably more people have heard of The Breslin, April Bloomfield's spot, than the Ace Hotel in New York, where it sits. Bloomfield, who raised consciousness of the gastropub with her wildly popular Spotted Pig, brought a rustic edge to her bar and restaurant, The Breslin, at New York's Ace Hotel when it opened in 2009. Outfitted with dark wood paneling and flooring accented with miniature carved pigs and cows and artwork of the same, the Breslin serves upscale pub fare on wood planks. Crowds lined up out the door awaiting their chance to try the beef tongue baguette sandwich with lentil soup; or sample guinea hen/rustic pork/rabbit and prune/head cheese terrine served with pickles, piccalilli and mustard; and wash it all down with one of seven beers on tap. Not exactly “hotel fare.” Same goes for Bloomfield's newer restaurant at the Ace, the John Dory Oyster Bar. Besides the raw bar, guests can choose an oyster pan roast, prepared with a steam kettle, and drink oyster stock.

The skittish economy is producing some curious pairings, as when Michael Psilakis and Donatella Arpaia opened the fine dining Eos at the Viceroy Hotel in downtown Miami. The duo wound up adapting the space and the menu to accommodate different demands at lunch and breakfast. Eos is now dinner only; Bistro e is a casual breakfast and lunch spot in the same space meant to attract workers from neighboring office towers.

During the day, waiters don Converse sneakers, designer tee-shirts and biker chain wallets that hold their order pads. A bento-box-style lunch sells for $15 and each table is furnished with an hourglass to ensure guests can get through lunch quickly. At night, the restaurant reverts to its normal, more formal identity.

Restaurants in more traditional hotels are adapting to accommodate new dining habits as well. At the historic Claremont Hotel in Berkeley, CA, a restaurant called Meritage opened late in 2009 — just as the recession started hitting restaurant spending hard. Executive chef Josh Thomsen revised the menu, creating small/large plates and wine pours. As a result, Thomsen says, “Meritage has become a place to dine for either ‘no occasion at all’ or for a special event.”

At this wine-focused restaurant, a weekly “Vineyard to Table” menu features ingredients grown for Meritage by local wine makers. The multicourse, prix fixe menu is paired with wines from each winery as well. Using local suppliers like this for 98 percent of its products and adding a new bar area, where guests can sample small plates and wines by the glass, have both helped revitalize Meritage. And that has created a buzz for the Claremont — which is, after all, the whole point.

Tips from a Master

Geoffrey Zakarian, who recently opened two high-profile hotel restaurants in New York (The Lambs Club and The National), knows the niche. His résumé includes turns at several Schrager hotels; he also created the highly acclaimed Town and Country, both once in hotels, and remains chef of the Water Club at The Borgata in Atlantic City. We asked him what his experiences have taught him.

How is running/owning a restaurant within a hotel different from a freestanding restaurant — or is it?

When running a restaurant in a hotel, it is important to note that your diners may all have different agendas. Some may have just gotten off of a flight. Some might be running to the airport. With a freestanding restaurant, you can be sure that they are dining with you because they chose to seek you out and go there. In a hotel, you have to be flexible to accommodate the needs of the guest. Someone that just arrived may be on a different time zone and simply want an omelet for their dinner — of course, which we would promptly make. In hotel restaurants, you also see a lot of single diners. We go out of our way to make them feel comfortable and accommodated.

What are hotel owners looking for?

The hotel owner wants to know that his sense of hospitality is going to transfer through to the dining experience. Again, it is all about making the hotel guest feel welcome and give them a home away from home. It does not have much to do with the items that are on the menu but more about the overall attitude of the entire restaurant or bar. In addition, providing great room service is key. It can push the guest's experience over the top and time and time again, we hear great things when we are treating and serving them in just the same way as we do when they are eating in the restaurant. A lot of room service menus come from a different kitchen or are prepared in a different way. I strive to ensure an in-room dining guest has just as great of an experience as if they were dining in the restaurant itself.