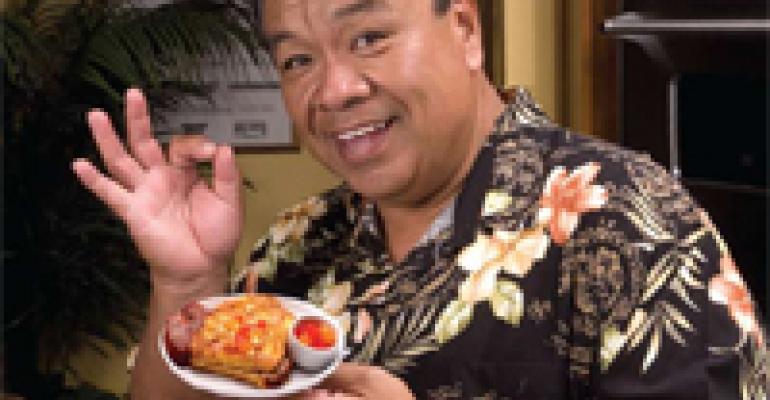 With A Wide Grin, Chef Sam Choy, The Hawaiian Culinary Ambassador, welcomes all to dine on Sam Choy Cuisine in American Airlines' Premium Class. The James Beard Award 2004 winner, a big man with an even bigger heart, Choy is excited about his new gig in the sky. A native of the Islands, Choy has sought to translate Hawaii's wonderful mix of cultures into his cooking. Everything he creates is based on his personal history growing up in the small fishing village, Laie, on Oahu's north shore. Restaurant Hospitality contributor Libby Platus visited Choy at the Dallas American Airlines Kitchens to taste what he's planning.

RH: You are credited with being one of the founders of Hawaii regional cuisine. How did that happen?

Choy: Roy Yamaguchi, Alan Wong, Marc Ellman, Peter Merriman, myself: a dozen chefs got together because we used products raised and caught in Hawaii. That was August 1991. We called this Hawaii Regional Cuisine. When Janice Wall Henderson wrote the book, Hawaii Regional Chefs, things went from 0 to 60.

RH: Sam Choy Style has been called Kapa. What does that mean?

Choy: If you are Hawaiian, married to a non-Hawaiian, your children are Kapa, or half-mix. Kapa cooking is half-mix cooking: a little bit Hawaiian plus food of other cultures.

RH: How did you get hooked on cooking?

Choy: My dad owned a restaurant. Whatever he cooked, he added his magic to it. When he put food on the table, everyone raved, “Wow, man! This is so good!” That's when I said, “That's what I want to be.”

RH: What are your favorite luau memories?

Choy: Every Saturday, my family catered for 800 people. As a kid, I was a vegetable prep guy. It was special when I got moved up to do fruit punch. When I was 15, Bob Hope came to a luau.

RH: Why did you decide to partner with American Airlines?

Choy: I've had experience with two other airlines. I was cautious, yet thankful, for this opportunity. American makes sure everything they are doing is right.

RH: As plans progressed, what made you feel you had made the right decision?

Choy: American Airlines brought the flight attendants in from day one; that was a very good call. Attendants can relate problems in preparation and they hear customers' comments. We worked together — American, the caterers and attendants. I proposed food that was “idiot proof.” Items had to hold moisture, with 3 or 4 minutes' margin.

RH: What made you choose to have American Airlines' kitchens produce your menu instead of going into production yourself?

Choy: American's catering kitchens are the best in the game: LSG, Gate Gourmet and Chelsea. Also, to create this kind of production kitchen costs a lot of money.

RH: Who breaks down each step for production?

Choy: I break down the cooking so it's as close to what I create as possible. For example, if I say, “Marinate for an hour,” somebody down the line might forget and leave the chicken in a marinade for several hours, changing the taste. Instead, we glaze the marinade. The caterer knows how long to cook something, allowing for rewarming on the plane.

RH: Your restaurants serve immense portions. Will you do that on the plane?

Choy: On the plane, added weight is a major factor. Food cannot be too big or high and has to fit on carts and in airplane ovens. Proteins average 4 ounces, carbohydrates 3 ounces and vegetables 2 ounces. The total may be 12 ounces and liquid. There are nutritional guidelines. Other factors are: People are sitting, not doing aerobics; there are changes in pressure; and taste buds work differently at that elevation.

RH: Some of the items on Premium Service are rather sumptuous: Mascarpone cheese-stuffed macadamia French toast garnished with pineapple marmalade and honey butter, and salmon topped with creamy wasabi served with shiitake butter orzo. What's your goal here?

Choy: We give customers something fresh, new, tasty and consistent. And I like to kick things up.

RH: You have nine restaurants in Hawaii, Japan and Guam. Why did you focus on the Pacific Rim first?

Choy: I consult for Mitsubishi Entertainment Japan; they run it. Louis Vuttion, in Guam, wanted us to be a partner. Another group is excited about mainland possibilities.

RH: Is anything else on the horizon?

Choy: The frozen food line. My sauces are doing great.

RH: You've written 10 cookbooks. How long does it take to write a cookbook?

Choy: Two years. I'm working on a new poke cookbook and my partner is Amazon.com. My publisher said, “we don't have anymore of your poke cookbooks. Amazon bought them all.” The publisher found them on the Internet for $150 a book! He called Amazon.com and said, “ You want another poke book?” They said, “We'd love it, we just sold the last one.”

RH: You feature poke on your menu in Hawaii. What is it?

Choy: Poke is Hawaii's soul food. It is raw fish cut into small pieces and mixed with seaweed, herbs and spices, onions, sesame oil and other things.

RH: Why did you build a Food Network-style kitchen in your Diamond Head restaurant?

Choy: Viking Kitchen sponsored it. We do food lectures/cooking classes and local TV, and we introduce new menu items. We have big overhead cameras catching our cooking on monitors. We do cooking demonstrations for corporate retreats. We had a team of heart surgeons from two hospitals competing like an Iron Chef challenge. We had two emergencies, four stitches and one fingertip cut off.

RH: Ouch! Well, what are your plans for TV?

Choy: I think I'm going to go with Emeril. Our chemistry is just incredible. We have so much fun. It's “Spam vs. bam.”

RH: Is Spam part of your cuisine?

Choy: Of course! Hawaii is the number one consumer of Spam per capita. In the old days, it was used because it's easy. We've grown accustomed to the taste. I went to Hormel's big anniversary. I did a demo and was a Spamboree judge. I got to see them make Spam. You think they use everything: tongue, nose, tails. That's not true. They use good pork cuts. It's spicy ham.