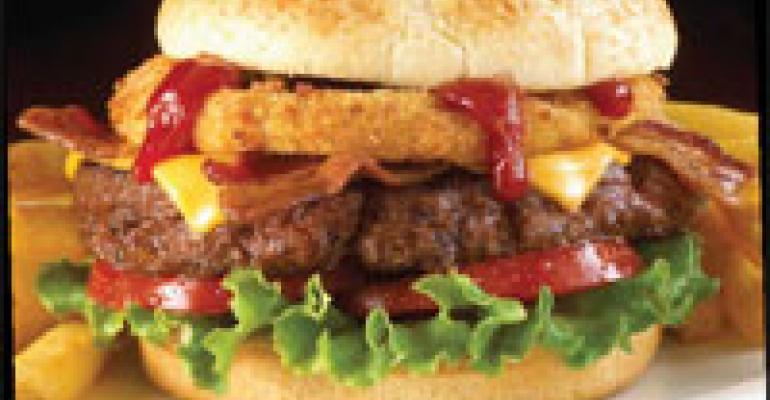 What is it about burgers anyway? As if having some magical power over us, they climb into our psyche and gnaw away at us, teasing our carnivorous side with the promise of burgery goodness. And we give in to that craving every time. Ask Technomic. In a recent study of 1,200 U.S. consumers, a whopping 85 percent said they eat a burger at least once a month; only 6 percent said they don't eat burgers at all.

The momentum is undeniable. Our passion for burgers has been on the rise, especially in recent years, according to Darren Tristano, executive v.p. of Technomic Information Services.

“The burger is broadening, and that's a sure sign that this is an upward trend, even a surge,” Tristano says. “Years ago, a burger was a burger. But today, operators and chefs are differentiating their burgers through size, quality and style. The innovation surrounding burger concepts is unprecedented.”

To capitalize on this perennial favorite, think outside the box.

It's true: High-end, low-end; mega, mini; traditional, exotic; accessorized to the hilt or barely dressed — burgers are booming, baby, and if you aren't getting a piece of the action, then maybe it's time to unleash your creative genius. Casual and fast-casual operations across the country are jazzing up their burger offerings, while renowned chefs are expanding their repertoires to include cuisine on a bun. Some are going so far as to open their own burger joints.

“There's not a high-end chef in America who hasn't considered or done a brilliant burger,” reports New York/California-based restaurant consultant Clark Wolf. He points to Hubert Keller, Daniel Boulud and Thomas Keller as leaders of this hot new trend.

In fact, many pundits consider Daniel Boulud the founding father of the haute burger. The unveiling of his now-infamous sirloin burger stuffed with braised short ribs, foie gras and truffles at DB Bistro Moderne took customers by surprise in 2001. Today, that burger draws a loyal following and accounts for nearly a third of the bistro's food sales.

Another early adopter, Hubert Keller, rolled the dice with his Burger Bar at Mandalay Bay Hotel & Casino five years ago. His creative upscale burgers became so sought after that he opened another Burger Bar just a few months ago. Already, St. Louisans can't remember how they lived without it.

Thomas Keller? He's doing Burgers and Half Bottles, a burger joint inspired by quick-service legend In-N-Out, in Napa Valley. The thoughtful selection of house wines, his own brainchild, makes his new restaurant untouchable.

Other top chefs — including James Gottwald, Tom Colicchio and David Burke — are jumping on the chuck wagon as well, creating burger experiences beyond compare. Bobby Flay is opening Bobby's Burger Palace in the greater New York area, with growth of 5-10 units a year expected.

And let's not forget Laurent Tourondel, who has taken his BLT restaurants into a bold new direction with BLT Burger. Working with Kobe and Black Angus beef, Colorado lamb, Atlantic salmon, turkey breast, organic grains and vegetables and a variety of gourmet toppings, Tourondel stays true to his craft of creating extraordinary food with top-quality ingredients. He also recently introduced a bar menu at BLT Steak that features mini burgers: Kobe beef with red wine-braised shallots and Gruyère or Angus beef with bacon, onion, tomato and cheddar.

Magic in the Size

Tourondel isn't the only one getting into the “slider” game. Nicknamed after the legendary White Castle Slyder, the mini burger is finding its way onto menus across the country, taking on a variety of forms, flavors and price points. Apparently, the burger phenomenon is somewhat paradoxical: Customers want either a thick, juicy, double-fisted burger or a tiny little slip of a thing. They're digging the little guy because it shows up on a plate of three or four as a great appetizer for sharing.

Customers are choosing sliders as entrées, too, and no wonder: They're given as much thought and care as their more traditional counterparts, and their innovative ingredients and flavors make them irresistible. On the sophisticated side, Zuni Café in San Francisco combines house-ground hamburger on rosemary focaccia with aioli and a choice of gorgonzola or gruyère. On the more casual end, Chili's offers simple mini bacon cheeseburgers on sesame seed buns. T.G.I. Friday's does a chimichurri slider with melted provolone and a savory garlic-herb sauce. Red Robin, Ruby Tuesday and Applebee's — all big burger sellers — offer sliders as well.

Hard Rock Café does not. At least not yet. Mike Winkler, senior director of food and beverage/purchasing, says the chain would have to do rigorous testing before putting mini burgers alongside its 10-ounce Legendary Burgers. “I'm not so sure people would order a burger as an entrée after having mini burgers as an appetizer,” he reasons.

Which brings us to a discussion of the big guys — the burgers that show up one to a plate, thank you, because they pretty much rule when it comes to satisfying the burger craving.

You might recall that when burgers first came to the table a couple of decades ago, the beef weighed in at 1/10th of a pound. Today, customers clamor for 1/3- and 1/2-pounders. Mid- and upscale operations typically serve entrée burgers in the six- to 10-ounce range, although, for the very serious burger appetite, Old Homestead Steakhouse in Manhattan blows that average away. Old Homestead offers an 18-ounce Kobe burger — a four-ounce medallion of Japanese Wagyu sirloin tucked inside 14 ounces of ground Wagyu. Pricey? You bet. At $81, it's undoubtedly the priciest burger in town.

Absolutely. High-end chefs are grinding meats in-house to ensure the freshest, highest-quality, best-tasting product, and chains continually seek that perfect blend of cuts and flavors. When asked about the importance of various factors in the burgers they eat, those 1,200 consumers mentioned earlier told Technomic that the quality and taste of the meat are the most important attributes.

Chicago-based menu-research firm Datassential reports that Angus burgers have seen strong, double-digit growth on menus across all commercial segments over the past two years. During the same time, sirloin burgers have shown up less on casual concept menus; Kobe is growing in both casual and fine dining.

The rise in Kobe and Angus can be attributed to the growing sophistication of consumer palates. Customers are willing to pay more for these finely marbled, tender, full-flavored meats, and appreciate the added advantage of Kobe's high omega-3 and omega-6 unsaturated fatty acid content. Because Kobe (Wagyu) beef is raised in strict accordance with traditional Japanese methods — including daily massage to ease muscle stiffness and a diet that includes beer in summer months to stimulate appetite — it is the most expensive beef, often commanding well over $100 a pound in the United States.

Not as cost-prohibitive and in extremely high demand across operations of all stripes is Angus. Finely textured marbling sets this beef apart in terms of tenderness and quality, and consumers and chefs alike acknowledge its appeal. New York Burger Co. swears by all-natural Angus beef chuck rolls, ground fresh locally.

Winkler says that Hard Rock tested a number of different grades and grinds, finally agreeing on a proprietary Certified Angus Beef mixture. The secret is in not only in the beef's quality but also the carefully balanced fat-to-lean ratio, Winkler says.

Don't underestimate the importance of the cuts, either. Tourondel's BLT Burger combines sirloin, short rib, chuck and brisket, and his customers wouldn't have it any other way.

Rogue Restaurants c.e.o. Dean Loring believes the quality lies in the diet. Customers of his Burger Lounge in San Diego are all about the “true, honest, homemade flavor” of his burgers. Those burgers are made with grass-fed beef.

So you've got the basics worked out — the right beef, the right grade, the right fat-to-lean ratio. Now what? How do you dress this burger up to make it the one customers call their own?

Start with the mix-ins. Do you go classic with just salt, pepper and a little seasoning, or go all out with something wilder? Have you considered butter? Some chefs mix it right into the meat; others throw a pat on top while it's cooking. At EatBar in Arlington, VA, Chef Nathan Anda mixes butter, shallots, garlic, rosemary, salt and pepper into his eight-ounce burgers. At Charlie Palmer Steak, the burgers are flecked with parsley and chives. How about a splash of tomato juice like you'll taste in a Morton's burger? Done right, add-ins can be your personal signature.

And then there's the bun. Datassential information indicates that brioche and ciabatta are trumping the traditional bun in many circles, and multigrain is moving in among more traditional bread and bun options. Overall, carrier options are broadening right along with their host burgers, from the form they take to the way chefs prepare them for presentation.

And toppings: Here's where burgers get really intriguing. New items and combinations are proliferating at the speed of light, giving customers a broader range of choices.

House-made ketchups and mustards are sharing the stage with chutneys, salsas and aioli. Bacon, onion, tomato, lettuce, pickles and chili are making room for the likes of avocado, portobello mushrooms, roasted red peppers and grilled pineapple.

Frank Scibelli and Dennis Thompson are doing build-your-own at Big Daddy's Burger Bar. Scibelli says that as much as customers love their Sam I Am and other burger creations, most of which are derived from classic dishes, the build-your-own burger is by far the customer favorite. “It's been incredibly well-received,” he says. “Since opening on the last day of 2007, we've been consistently busy.”

While it's tough to argue with results like that, not everyone is enamored by fancy toppings. Operators like Loring prefer the traditional. Burger Lounge is based on that keep-it-simple approach. “A lot of places are offering mango salsa, pineapple — all kinds of toppings — but ultimately I think they'll find that 90 percent of customers are ordering five percent of those choices — the more traditional choices,” he says. “In the end, if you offer quality and value, customers will keep coming back.”

With all the craving going on out there, you'd better believe they'll come back. To the traditional, the exotic, the big and the small. America loves its burgers. Feed that need in whatever style you do best, and you've got a winner.