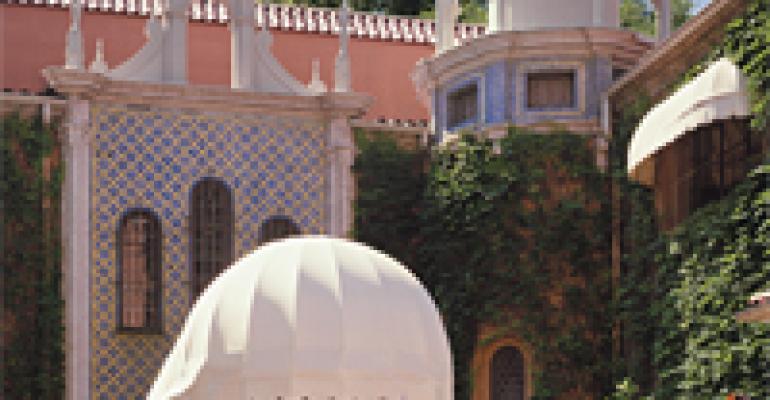 In digs fit for a king, John Tesar reigns over three splendid restaurants at the Rosewood Mansion on Turtle Creek in Dallas. Tesar was a relative unknown plucked from a field of hundreds to be the Mansion's executive chef. He trained at Anne Willan's La Varenne in France and, before the Mansion, was chef at Rick Moonen's RM Restaurant at Mandalay Bay in Las Vegas. In a short time, he has proven himself worthy of his new post. He recently took time off from the Sun Valley Food & Wine Festival to talk about some of the exciting changes at the Dallas landmark.

RH: Of the many food and wine festivals you are invited to, why do you choose this one?

Tesar: I've had many trips here to do private wine dinners, and know a lot of Sun Valley people. Every time I've come here, people have welcomed me with open arms. I'd rather go where I know people and feel comfortable. Sun Valley is like a home away from home for me and has always been receptive to great food and wine.

RH: How did you end up at the Mansion?

Tesar: Someone told me Dean Fearing was leaving the Mansion on Turtle Creek. The Mansion is an iconic institution and I couldn't pass up the chance to try. So, I threw my hat in the ring. They interviewed over 500 chefs.

RH: Did you ever find out why they chose you?

Tesar: They brought me over to the home of Bob Boulogne, c.o.o. of Rosewood. John Scott (the president/c.e.o.) and other guests were there. I did an impromptu BBQ and I wound up cooking with Bob's daughter, Lilly, who was about five at the time. She was up on a chair peeling shrimp. They loved the meal. Lilly sat on my lap and said, “Mommy, can Chef John sleep over?” Three days later, I got the job!

RH: What was your biggest challenge once you were selected?

Tesar: I had the job of reinventing the Mansion. Our restaurants were part of a $20-million renovation. We departed from Southwestern cuisine. I also had to fill Dean's cowboy boots. And Dean didn't go away — he opened a $7-million restaurant down the block at the Ritz-Carlton. So, in some friendly way, I had to coexist with my predecessor, who is revered. But we've done it. I got the fifth star back for the hotel. We have the top rating in Dallas. I owe Dean a debt of gratitude for creating the opportunity for me.

Tesar: The Chef's Room is a 20-seat room with a salon. I went to a chateau in Champagne, France, a few years ago, fell in love with the whole salon concept and sold the idea to Rosewood. You enter our salon, are offered a tray of canapés and choose a champagne or aperitif. The captain greets you, and I talk to you about the menu. Then you sit in a beautiful room with hand-carved wood, windows with the family crest and an etched ceiling. It's the library of Sheppard King, original owner of the Mansion. Outside the windows of the Chef's Table is my garden for the vegetables and herbs we use.

RH: How did the garden get started?

Tesar: I met Tom Spicer, an amazing organic farmer, when I first came to Dallas. He knows how to find wild asparagus and morels in Dallas! We hit it off, and I said, “You know, Tom, we have all this fertile land at the Mansion, I want to pull these flowers up and put in a garden. Can you help me do it?” Now I have arugula, tomatoes, radish sprouts, five different kinds of mint, six different types of basil, verbena, fennel…

RH: You're known for your spectacular salads with two unusual dressings poured together over the salad at the table. How did this ritual start?

Tesar: I went to a wonderful restaurant, Mugaritz, in Errenteria, Spain. The chef prepared a salad with a little goat whey and a little brown butter poured over the top. I had never tasted the true flavor of the greens being complemented by something that was so earthy. Yet, we put cheese on salads, so it wasn't so much of a stretch. When I came back, I gave the salad dressing idea my own twist: I take Emmental cheese and water, blend it together, then strain it. The nutty flavor of brown butter matches up. We pour the dressings in front of the customer for the freshness and the immediacy…so the salad doesn't get soggy and the dressing doesn't run under the salad.

Tesar: It's changing. People think it's still all oil men and cowboys, or that Larry Hagman will be drinking at the Mansion's bar. But, Dallas, Austin and San Antonio are becoming cosmopolitan. There's a tremendous group of chefs and restaurants to choose from. People who live here have choices and are becoming thirsty for more.

RH: What do they want most?

Tesar: I won't lie to you. We still sell a lot of red meat. When I arrived at the Mansion, one of the first things I did was split the menu right down the middle, with half of it fish. If Texans are given quality, some hospitality and a little bit of personality, you can win them over.

RH: How do you win them over?

Tesar: We pride ourself on customer recognition. The Mansion has such a strong history of repeat clientele (70%) that we track visits. We know who everybody is, how many times they've visited, what the occasion is and where they are coming from. We can suit the experience to the individual guest and can inform every staff member, so the experience from the beginning to the end has continuity and regularity. That is true five-star/five-diamond service.

RH: You've been on TV quite a bit. Do you have plans for a television show?

Tesar: I'm currently working on a show called Made in Texas. It's not Tex Mex and Southwestern. This is similar to what Jose Andres did in Spain, a travelogue showcasing sources of ingredients. We'll highlight the shrimp farmer, the Panhandle fisherman, the herb farmer, the guy who grows our guinea hens or Tom Spicer looking for wild asparagus.

The Small Business Administration announced that Restaurant Revitalization Fund applications will open on May 3
Apr 27, 2021