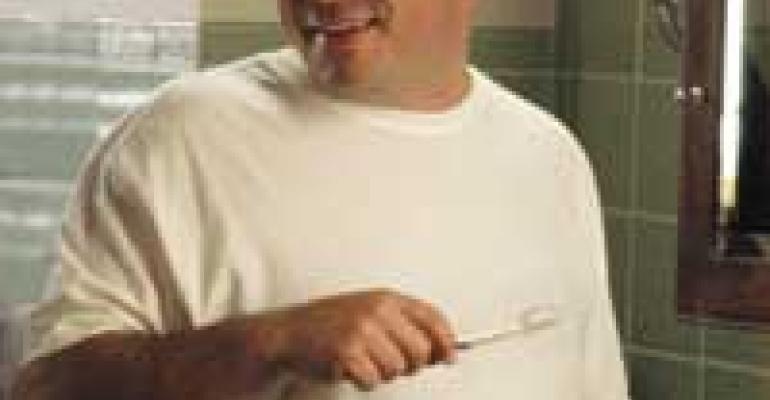 BLAME IT ON THE BAM!

Few in the food world took note of the final taping of Emeril Live!, which took place on Dec. 11. His employers, for whom he made untold millions, gave him a nice pat on the back. “Emeril has been the cornerstone of Food Network’s success and helped pave the way for chefs on TV” was all Food Network president Brooke Johnson said to mark the occasion.

And Emeril himself didn’t seem too broken up about it, either. “It is true that we will not continue production of Emeril Live after the next filming in December, but I am looking forward to continuing a long working relationship with them for years to come,” he said in a statement earlier this month. “Emeril Live will continue to air on the Food Network for about two more years, with premiere episodes throughout 2008, and I will continue to host Essence of Emeril next year.

“We are also looking into some specials and other new development opportunities,” Lagasse added. Indeed. His next restaurant venture, Table 10, opens in January 2008 at The Palazzo in Las Vegas.

Table 10 will be his 11th restaurant, and you can bet it will be similar to his other ones in that it will be filled with people who are familiar with Lagasse from his TV work and want to see what his restaurant is like. He may well be remembered as the first chef to create his own national customer base, one that allowed him to open successful restaurants in Las Vegas, Orlando, Atlanta, Miami and Gulfport, MS. And the same people who got turned on to his level of dining—approachable food that’s fairly expensive, but miles away from traditional French food or challenging fusion fare—have been equally willing to give many other chef-driven restaurants a try.

You may have scoffed at those in Emeril’s audience who would scream and applaud whenever Emeril added garlic to a pan or ground fresh black pepper onto a dish. But many of those easily amazed audience members, and several million more like them watching at home, put other chefs up there on the pedestal, too. Why? Because Emeril was a regular guy who made chefs seem accessible. It can be argued that no individual has ever created as many customers for the full-service side of the restaurant industry as did Emeril. He also helped establish that it was OK to go to a chef-driven restaurant even though it was highly unlikely the chef would actually be in the kitchen, or even in the state, on the night you ate.

As much as he did for others, Lagasse did all right for himself, too. He was the first chef (and we’re guessing he’ll be the last) to star in a TV sitcom, NBC’s ill-fated “Emeril.” He had the usual book, cookware and other merchandise lines, too, but his ascendancy may have reached its zenith when he starred in TV commercials touting Crest toothpaste. What, exactly, was his dental care expertise?

No matter. Just look at how many other chefs and food world entrepreneurs now prosper in his wake. The Food Network’s Next Iron Chef series last fall put up monster numbers for cable and made national figures out of its chef-participants. The 15 participants in Season 4 of Bravo’s Top Chef are already in the midst of battle in Chicago. Ratings climbed significantly in each of the show’s first three seasons; producers are expecting to do even better this time around.

Over on the Fox network, the finale of Hell’s Kitchen Season Three drew 9.8 million viewers, making it the No. 1-rated program in all of television on that night. As you’d imagine, casting is well under way for Season Four. Hell’s Kitchen ringmaster Gordon Ramsay’s other prime time series, Kitchen Nightmares, which sees the British chef resuscitate failing U.S. restaurants, is already looking for makeover candidates for its second season. The first one saw the show start slowly on the ratings front, but finish strong by delivering an audience that was up 21 percent in key demographics over the show that filled its time slot in previous years. Kitchen Nightmares has already spawned a sub-industry of critics who go to the restaurants Ramsay has remade and reviews them. The usual verdict: gee, the guy knows what he’s doing, as do the restaurant he works with, even after Ramsay departs.

How close are we to reaching the outer limits of the chef/media explosion? To find out, you’ll have to download Top Chef Challenge, the new wireless game available on AT&T and Sprint. It’s set in Tom Colicchio’s fictional new restaurant, and players work through a series of kitchen challenges as they attempt to rise from entry-level dishwasher to five-star Top Chef status. Colicchio and Padma Lakshmi appear from time to time to offer helpful hints. Top Chef Challenge costs $6.99 for a one-time download, $2.99 for a month’s subscription fee.

We say that when cooking shows start appearing on cell phones, the industry is breaking new ground. And we’d argue that Emeril is the one who helped us get there.