Chowing down at the NRA Show

RH editor-in-chief Mike Sanson spent five days in Chicago at the NRA Show and more than a dozen restaurants were on his itinerary.

I’m always eager to visit Chicago because the restaurant scene there is as vital as it is anywhere in America. These are some of the newer restaurants worth checking out during your next visit.

I had to visit Tavernita because chef Ryan Poli is a 2005 Restaurant Hospitality Rising Star and he just appeared on the cover of our April issue. He’s now toiling for the Mercadito Restaurant Group, and this huge Spanish restaurant may be the hottest scene in Chicago right now. It has 300-plus seats and no apparent sound absorption material, which makes the place crazy loud. As you might expect, it attracts a young crowd. Poli’s small plate menu is lots of fun and exhibits an easy, relaxed cooking style. Tavernita is helping lead the charge for America’s growing love affair with Spanish food.

Lunch was a treat at Publican Quality Meats, Paul Kahan’s new butcher shop/restaurant that supplies his other restaurants, including Blackbird, Avec and Publican. Many of the old-time butchers and butcher shops have faded away, but Kahan and a new generation of young chefs are stepping up with hip, cutting-edge butcher shops that go far beyond their ancestors. Whole animals arrive at the shop regularly and are butchered in a state-of-the-art facility in the basement. It shares the space with a terrific bakery. How many places can you go where you can buy top chef-quality meats and sit down to eat a Sopressata Sammy (sopressata, bagna cauda, shaved asparagus, frisse and parmesan on ciabatta) or Better Than a Gyro (braised pork belly, raita, escalivada, pea shoots and Calabrian chili orange vinaigrette on griddled flatbread)?

Spiaggia Chef Tony Mantuano recently took over the old Bistro 110 space and installed a casual Italian restaurant dominated by an enormous pizza oven. If you’re a sucker like I am for beautifully blistered thin-crust pizzas, then Bar Toma is worth more than a look. 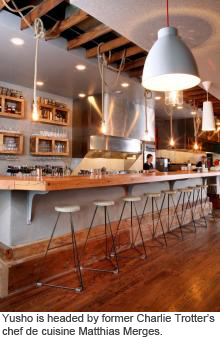 I also had lunch at the Slurping Turtle, the new Japanese noodle/comfort-food joint of Takashi Yagihashi. RH declared him a Rising Star back in 1999 when he was the chef at Tribute in Detroit, but a lot of time has passed since then. He has only gotten better. His upscale Takashi is a three-star upscale restaurant in Chicago’s Bucktown neighborhood. The Turtle is downtown and decidedly more casual, yet just as satisfying. Aside from the many styles of noodle bowls, you’ll also find amazing dumplings featuring ingredients such as pork belly, duck fat-fried chicken and crispy oysters. Along with the dumplings, I also had an octopus salad from the sashimi bar and bacon-wrapped enoki mushrooms from the bincho grill. Yum.

In a similar vein, I also checked out Yusho, a Japanese small-plates grill concept headed by a 14-year Charlie Trotter’s veteran. Matthias Merges, who was Trotter’s chef de cuisine, has done what so many other chefs are doing these days—offering a more casual, relaxed dining experience. But keep in mind this guy has worked for freakin’ Trotter, so his version of casual kicks some serious culinary ass. Consider some of what I ate: a Hama Hama oyster with English pea, caviar sawara, wafu and sushi rice; octopus with green beans, enoki mushrooms, salmon roe and garlic miso; a skin tasting featuring pig, chicken, salmon and soft shell crab; grilled foie gras mochi with a passion fruit chicken wing, lime and bonito salt; oxtail with lemon, toasted brioche, red miso strip loin, nori and shishito. It was all ridiculously good. 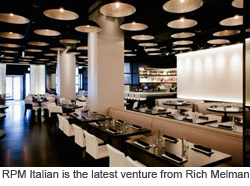 I can’t go to Chicago without checking out the latest from the great Rich Melman and his Lettuce Entertain You group. On the high end, I had dinner at RPM Italian, an ultra hip and sophisticated Italian restaurant with a very cool vibe and an ace chef in the kitchen—Doug Psaltis. What makes this new restaurant so interesting is that Melman’s two sons and daughter—RJ, Jerrod and Molly—are the driving force behind the concept, and so are its two partners—Bill and Giuliana Rancic. If you watch television at all, you know that Bill was the first winner of Donald Trump’s The Apprentice, while Giuliana is the host of E! News on the E! Television Network. Her mother’s recipes inspired some menu items. Not that Psaltis needs inspiration. He is a 2006 RH Rising Star who has toiled under some of the world’s greatest chefs, including David Bouley, Alain Ducasse, Thomas Keller and Geoffrey Zakarian. The food and service were terrific.

Here’s one last recommendation: Au Cheval in the West Loop area. As pretentious as the name may sound, it’s basically a glorified bar that was created by Brendan Sodikoff, who is responsible for a number of other hipster joints, including Maude’s Liquor Bar just down the street. Though some have described it as an upscale diner because of its diner-like interior, it’s really more of a gastropub because the food here is soul-satisfyingly delicious. If the idea of hash browns smothered in duck-heart gravy does something for you, then Au Cheval is your place.