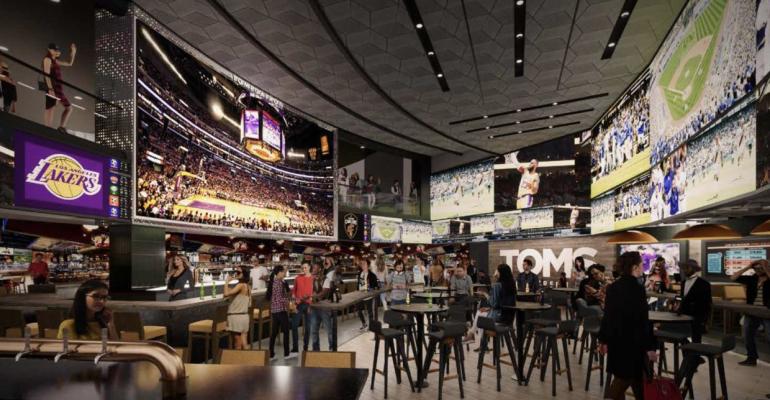 The creators of Tom’s Urban are making good on a promise to evolve the concept into a ‘mega-eatertainment’ venue with a brand relaunch of the company's L.A. Live restaurant in Los Angeles.

The location, currently under construction, will relaunch as Tom’s Watch Bar, the company announced Tuesday morning. The next generation sports bar will more than double the number of TVs from 70 to 155, including adding a “Megatron” screen for wall-to-wall viewing.

“The multi-sensory experience will transport sports fans to a new dimension with over 155 high-definition TVs throughout the renovated 20,000 square-foot, two-story space, with room for over 400 guests,” the company said.

The audio and visual upgrades will give guests a 360-degree view of live music and sporting events.

“The all-new restaurant will be perfect for sports fans who are looking for a front-row seat to catch their favorite game without having to ever leave the heart of downtown Los Angeles,” Dan Holm, chief marketing officer, said in a statement.

Still, the makeover is “more than enhancing our TV package,” Shannon McNiel, president and chief operating officer, told Restaurant Hospitality in an email.

The makeover in Los Angeles includes an extended patio, an updated interior look and a new menu and cocktail program.

“It’s more than a name change,” McNiel said. “This is an opportunity to introduce the place we call ‘Tom’s Watch Bar’ where consumers can experience true eatertainment. A place to form emotional connections, cheer for your team and enjoy great food in a bar where everyone knows your name.”

Tom Ryan, co-founder of Denver-based better burger chain Smashburger, founded Tom’s Urban in 2012 as a full-service restaurant open 24 hours. It has since evolved into a restaurant and elevated sports bar with locations in Las Vegas at the New York-New York Resort & Casino, Denver International Airport and two casinos in Washington state and Connecticut. Over the past year, the brand has expanded its executive leadership team with the addition of Holm and McNiel.  In July, Scott Weingarten was named vice president of real estate and development as prepares for growth under the new banner.

New locations going forward will be called Tom’s Watch Bar.  However, the company's other four locations will keep the name Tom’s Urban, for now, Holm said.

The Los Angeles restaurant will remain open throughout the renovation, which will be completed in the fall.

Holm said the brand is currently in process of identifying and finalizing future sites.

“It is an exciting chapter for the Tom’s brand as we break into the elevated sports bar market with the all-new Tom’s Watch Bar,” McNiel said in a statement. “Consumers want more than the average brick and mortar experience, and after 12 months of cultivating this new service model, Tom’s Watch Bar will showcase a unique eatertainment offering that generates an emotional connection with its guests.”