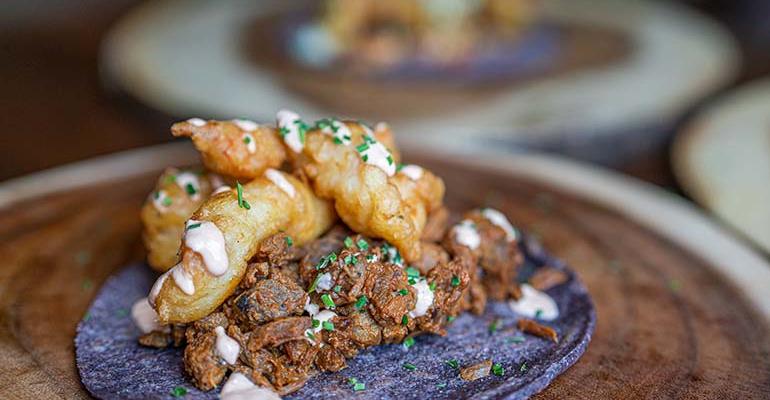 Team Cordero — the recently formed, family-operated restaurant group based in Northern Virginia from chef Michael Cordero — is expanding again with the opening of their latest restaurant and first fast-casual concept, Taco Rock. Taco Rock is Cordero’s ninth restaurant and opens this month in Arlington as a rock-and-roll-themed taco restaurant with an in-house tequila bar.

“What we have done is taken a full service restaurant and shrunk it down to a 2,500 square foot- fast casual concept,” Cordero told Restaurant Hospitality. “We did not want to go with the graffiti on the  wall trendy vibe you get from taquerias nowadays. […] Our designer, Yvette Irene based out of New York, has taken an authentic taqueria and made it a hit bar people will want to hang out at.” 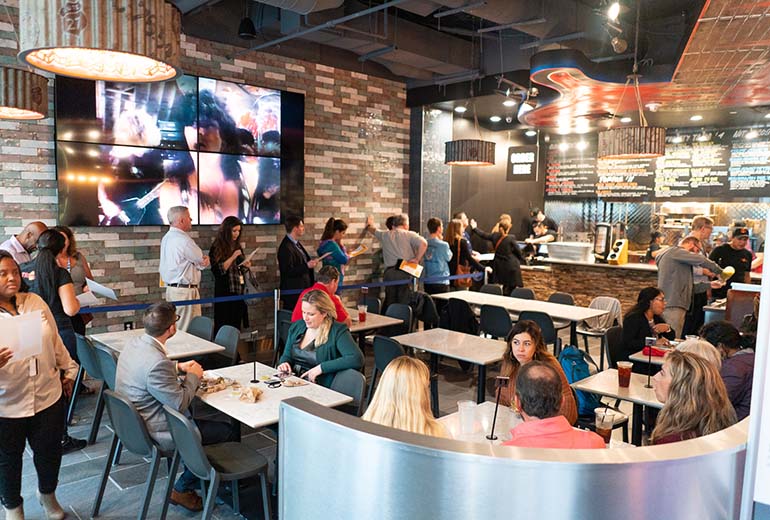 Yvette Irene created a space that was subtly evocative of its namesake: a giant guitar hangs from the ceiling for an Instagrammable moment, and rock and roll music videos are playing on the big screen TVs, but don’t expect Taco Rock to get too on the nose with theming:

“We wanted to make a hip, fun vibe, but we can always change the TV station to sports instead,” Cordero said.

In addition to the jammin’ aesthetic, Cordero said that the other two standout aspects of the concept are that they only use blue corn tortillas that are made in-house, and that they encourage slowing down the usual fast-casual vibe with a tequila bar featuring a varied menu of tequilas and margaritas for an average price of $7-$8 per cocktail. 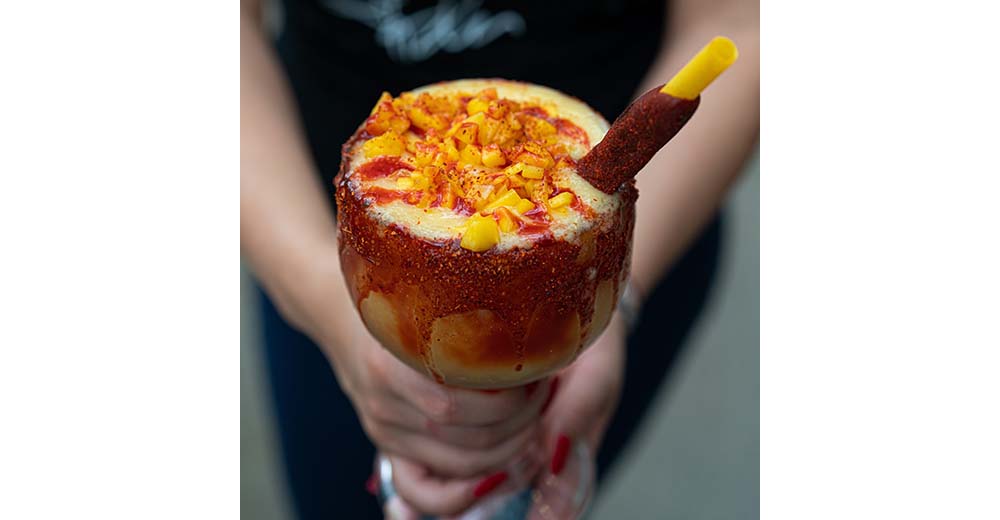 The menu is a combination of classic street tacos with more authentic Mexican flavors like tacos al pastor for about $3 each and their specialty flavors for $4 each, featuring more out-of-the-box, Americanized creations like their Piggy Mac Brisket Taco topped with slow-cooked brisket, macaroni and cheese and sprinkled with bacon. They also offer breakfast with eggy twists on traditional handhelds like a chorizo and eggs taco or breakfast empanada.

For dessert, Cordero stuffs churros in-house — “last week they were stuffed with homemade cheesecake and this week was chocolate!” and they also offer churro ice cream sandwiches.

“We are serving something unique,” he said. “There are a dime a dozen taco places all around me serving tacos in white flour or yellow corn tortillas. […]We want people to come and feel like it’s a full service restaurant, but with a shrunken-down ambience.”

Although most of his restaurants are one-off locations, Cordero and his team believe that the concept has legs for further expansion and wants to see at least 15 Taco Rock restaurants in the Northern Virginia are over the next five years. Although they don’t have investors quite yet (Cordero said they are in talks with interested parties), they plan to use a few different methods of saving money to afford further expansion:

“These days the restaurant business is super competitive,” he said. “We are all fighting for the same employees and by having fewer employees with this fast-casual concept, I think we are able to grow a lot faster. We’re also looking for second generation restaurants [i.e. to convert old spaces of restaurants whose leases have lapsed instead of starting from scratch].”

Plus, Team Cordero is not just focused on expanding their taco concept. Cordero said to look for an Italian restaurant coming to the area in 2020, but would not divulge further details.

Restaurants clean up beverage programs and employee rosters in 2019
Dec 16, 2019