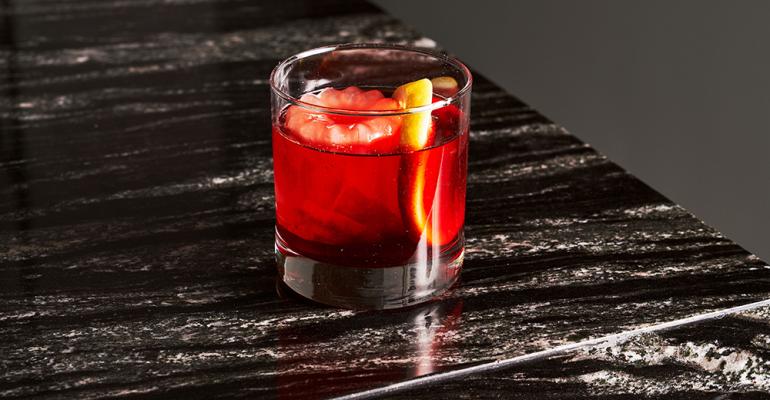 Khan Saab's
Drinks mixed with bubbles are popping up on summer menus including the above Smoked Nigroni from Khan Saab's.
Food & Drink>Drink Trends

Restaurateurs celebrate the summer with sparkling mixed drinks and rosé

Sunny summer beverage menus are typically awash in sparklers, spritzers and seltzers as consumers seek warm-weather cooldowns. While COVID-driven restaurant closures may have forced customers to cool off on their living-room couches, it hasn’t put a damper on beverage innovation.

Both get their due at Starbucks’ upscale Reserve Roasteries in Seattle, Chicago and New York City, all of which boast inventive coffee- and-tea based drinks that appeal to a range of patrons, including the sober-curious.  Alcohol avoiders can choose Draft Nitro Cold Brew, Sparkling Citrus Espresso and Nitro Mole Mocha; the latter is made with espresso, dark chocolate mocha and bitter chocolate mist, shaken with almond milk and topped with nitrogen-infused cold brew. Alcohol imbibers can opt for the Sparkling Sakura Allure that combines green tea, Japanese whisky and prosecco.

Beer has figured prominently in other creative quaffs. Prior to its closing, Atlanta’s landmark restaurant Watershed made waves with the eponymous Watershed Hangover Cure, a Michelada variation that presented a can of Miller High Life to be poured into an Old-Fashioned glass that held a frozen cube of Bloody Mary mix, a lime wedge and hot sauce, with a few sticks of house-made cornbread for ballast.

Ginger beer has been having a moment as well, thanks to renewed popularity of the Moscow Mule, the vodka-and-ginger-beer combo. Chicago’s newly opened PB&J, which stands for Pizza, Beer and Jukebox, reconsiders the standard ingredients in a fun variation on the theme: Pear Pressure mixes pear vodka with lime and ginger beer.

Bubbles and pops. The notion of adding effervescence to normally fizz-free drinks has caught on in many quarters. In Charleston, S.C., Jackrabbit Filly, a new-age Chinese-American operation that takes its name from the owners’ Chinese zodiac signs, crafts You Sound Like You’re from London, a twist on the classic British gin-based Pimm’s Cup, with Pimm’s, ginger, blueberry-citrus shrub, lemon, bitters and bubbles. There’s beverage bubble-up at Starbucks’ Reserve Roastery locations, too, where the aperitivo list includes Negroni Sbagliato, in which prosecco subs for the typical gin.

The cocktail menu at White Limozeen, the fun bar that pays homage to Dolly Parton and sits atop a spanking new Nashville hotel, features the unexpected Lightning Bug, a bubbly martini made with gin, sherry and sparkling wine, served tall over ice. Patrons can also choose a Champagne Jell-O shot or a Frozen Aperol Spritz. And speaking of spritzers, Chef’s Special Cocktail Bar in Chicago menus an intriguing reworking with Echo Beach, a combination of Aperol, banana, sherry, lime and cava. 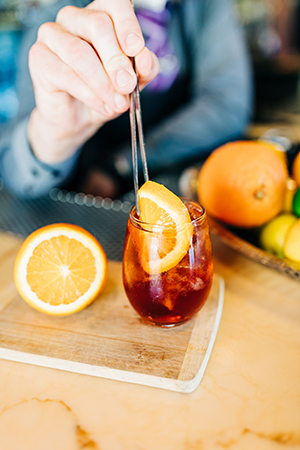 Photo: The Blushing Sangria cocktail from Mortar & Pestle is made with rosé, citrus vodka, rum, OJ and spices.

Rosey and red. Rosé wine has definitely established itself in our beverage lexicon and captured the imagination of consumers and product developers alike. It receives top billing in Rosé and Cream Ice Cream from Häagen-Dazs and rosé-flavored cupcakes at mass-retailer Target. The latter was a promotional play last year that reappeared in stores just in time for Valentine’s Day this year.

Chilled rosé wine has a clear affinity for sweltering summer months, and, especially in the frozen, slushy format dubbed frosé, has been the hot-weather drink of choice in recent years. JoJo’s Shake Bar in Chicago changes things up this season with Pretty in Pink, a cocktail that marries gin with elderflower liqueur and sparkling rosé.  Nearby PB&J gets in on the action with the Nosey Rosey, an unconventional marriage of mezcal and rosé with a dash of lemon for good measure.

The owners of the breakout fast-casual Indian chain Curry Up Now also operate Mortar & Pestle, a pair of laid-back lounges in Northern California. Here the Blushing Sangria cocktail is made with rosé, citrus vodka, rum, OJ and spices.

Finally, Khan Saab Desi Craft Kitchen opened its doors in Southern California in February. The chef-driven operation features the cuisines of Pakistan, India and Afghanistan, and its beverage menu trades rose for rosé with sophisticated, alcohol-free mocktails like the Smoked Negroni that combines Seedlip, a distilled, nonalcoholic spirit substitute, together with bitters and a lovely, floral rose syrup.

Errors in the names and descriptions of cocktails at White Limozeen have been corrected.
TAGS: Operations Food & Drink
0 comments
Hide comments
Recommended Reading