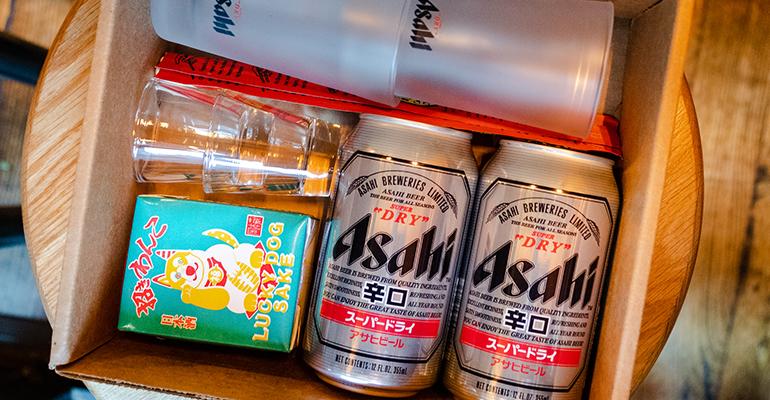 Sake Bomb kits from Ramen-San in Chicago is one of the to-go alcohol offerings from chains and independents during the coronavirus pandemic.
Food & Drink>Drink Trends

As the COVID-19 pandemic swept the country, many state liquor authorities displayed uncharacteristic flexibility in loosening their regulations, allowing many restaurants to sell beer, wine, spirits and cocktails for takeout and delivery for the first time in an attempt to help those businesses survive.

And even as state restrictions are being lifted and restaurants gradually reopen for dine-in, many operators are hoping the added revenue stream of to-go alcohol will remain in place permanently — or at least longer into what is expected to be a slow recovery.

For example, Chicago restaurant company Lettuce Entertain You Enterprises started experimenting with new allowances granted by Illinois’ liquor authority by unloading some rare bottles of bourbon and rum at its tiki bar, Three Dots and a Dash, and at a barbecue-and-whiskey concept called Bub City.

With bars and dining rooms closed, “it didn’t make sense to be sitting on all of that inventory,” executive partner Jerrod Melman said. 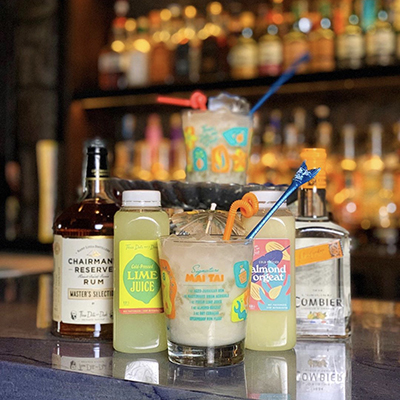 Photo: The Mai Tai kit, which includes citrus, a bottle of orange liqueur, orgeat and a bottle of rum, from Three Dots and a Dash is $65.

So he sold them to guests who had developed an affinity for those rare bottlings at a “slight markup” — between what he’d paid for them and the prices they’d fetch at a liquor store.

Seeing a nice demand for those spirits, he tried cocktails. Melman said Illinois doesn’t allow the sale of pre-made cocktails to go, but it does allow kits containing whole 375-milliliter 750-milliliter bottles. So many of LEYE’s more than 60 concepts offer brand-appropriate kits, such as Negroni kits from il Porcellino, Mai Tai kits from Three Dots and a Dash and Sake Bomb kits from Ramen-San.

Prices range from $20 for the Sake Bomb kit — for two mugs, two shot classes, two chopsticks, to bottles of Asahi beer and one of sake — to $65 for the Mai Tai kit, which includes citrus, a bottle of orange liqueur, orgeat and a bottle of rum.

Illinois doesn’t allow the sale of opened bottles, so Melman and his team assemble all the ingredients — citrus, mixers and so on — and appropriately sized bottles for customers to make the cocktails at home.

They’ve been a big hit.

“We haven’t looked back,” said Melman, adding that he plans to continue to sell bottles and kits as long as authorities allow it.

“As long as it’s legal I don’t see why we would stop selling these cocktail kits to people,” he said.

Pennsylvania lawmakers on Wednesday were the latest to clear the path for to-go cocktails.

The state legislature approved a bill allowing restaurants or hotels holding a valid liquor license that lost more than 25% of average monthly total sales (including alcohol) as a result of COVID-19 restrictions to sell mixed drinks to-go in a sealed container no greater than 64-fluid ounces in a single transaction. The bill was passed by a 48-0 vote and now goes to the governor’s desk for signature.

If approved by the governor, Pennsylvania will join 32 other states, plus the District of Columbia, in allowing cocktails or bottled spirits in some form to-go in response to the coronavirus crisis, according to the Distilled Spirits Council.

And some states allow local jurisdictions to set the rules on to-go alcohol. Jackson, Miss., for example, this week approved a bill that will allow restaurants to sell cocktails to-go.

“What we’re seeing now, in the immediate, is governors extending those orders,” said David Wojnar, vice president of state government relations for the Distilled Spirits Council, pointing to states like Rhode Island, where to-go cocktails were allowed after stay-at-home orders were lifted, and New Jersey, where to-go cocktails will be allowed through the end of the year. “It’s recognition of what [restaurant operators] are up against.”

In Missouri, for example, to-go alcohol sales have reportedly been extended another month.

And some states have indicated that to-go alcohol could be here to stay.

Alcohol-to-go sales can continue after May 1.

From what I hear from Texans, we may just let this keep on going forever.#txlege

Pre-batched cocktails — as well as bottles of spirits, wine and beer — are now legal for takeout and delivery in Florida by executive order of Gov. Ron DeSantis, who told the press on May 5 he’d like to make that permanent.

"I allowed [restaurants] to deliver alcohol, I think that's been pretty popular. We're probably going to keep that going, maybe we'll have the legislature change the law on that, but I think that that's been good,” he said.

Rocco Mangel, the owner of 10-unit casual-dining concept Rocco’s Tacos, based in West Palm Beach, Fla., has taken full advantage of that, delivering bottles of tequila, wine and beer as well as bottled Margaritas. Alcohol now accounts for 30% of all delivery sales, he said.

“I just got a shipment of 3,818 liter bottles with stickers for bottles of Margaritas,” Mangel said, adding that his team batches the cocktail every morning and then bottles it. They’re $35 each.

Although the Margaritas are available pre-made, Mangel said some customers ask for the mix and tequila separately so they can mix them themselves, and he is happy to oblige.

Like Melman, Mangel is also using the newly loosened regulations to unload rare bottles from his tequila collection at a 25%-50% discount.

“So we’re selling the current inventory we have to help operations,” he said.

He prices more standard tequila at around what customers would find at liquor stores. 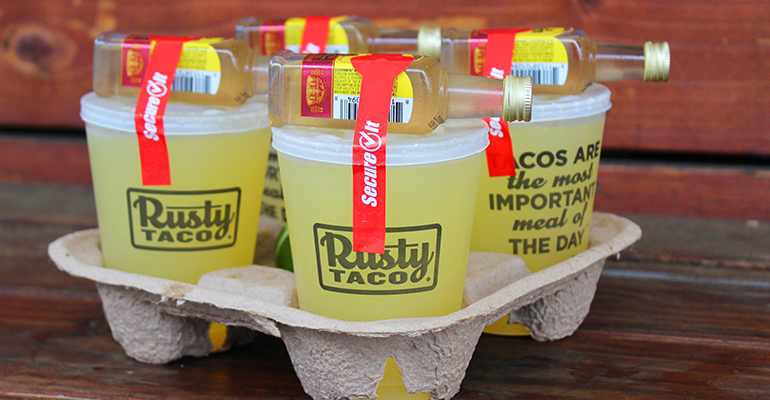 Alcohol can be mixed-in or left on top with these margaritas to-go.

Mici Handcrafted Italian, a six-unit chain based in Denver, has done so well with its sale of $10 bottles of house wine with any pizza order that it has had to cut back that offer’s availability to Monday through Thursday, because they were overwhelmed on weekends.

On Friday and Saturday, “we couldn’t keep up with the number of pizzas that we were selling to accompany the wine,” CEO Elliot Schiffer said.

“We had to reorder wine three times in a single week, which is very atypical,” he said.

Under normal, pre-coronavirus conditions, beer and wine sales — mostly wine — account for about 5% of income at Mici.

Schiffer noted, however, that these days, although his customers are ordering plenty of still wine, they aren’t buying Prosecco.

Although they’re drinking plenty, they don’t seem to be doing so in celebration.

Flavor of the Week: Hard seltzer — the flavored malt beverage that has captured the market
May 03, 2021

How mentors can turn beverage enthusiasts into professionals
Mar 23, 2021