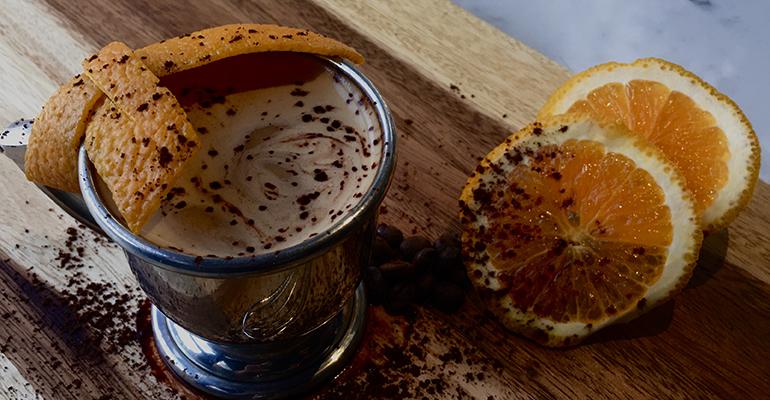 Kimberly Paul, beverage director of Etoile Cuisine et Bar and Brasserie du Parc said this drink which combines dark chocolate with passion fruit and espresso in a demitasse was inspired by a cup of hot chocolate she had at Angelina in Paris.
Food & Drink>Drink Trends

No more OJ on the side: Coffee and fruit juice share the cup in a refreshing twist

Espresso has traditionally been served with a strip of lemon zest on the side — a sliver of one type of acid and aroma to complement the different acid and aroma in the cup.

The latter is what is happening at Meno, the New York City branch of a coffee and tea house based in China. It has a section of “coffee juices,” which are iced fruit drinks topped with cold coffee, “so you can see a pretty layer of the coffee and the juice,” said Ying Ye, who is in charge of operations at the coffee house.

“They’re refreshing and new, and who doesn’t love lemonade, orange juice and pineapple juice?” Ye said, adding that the bitterness of the coffee adds balance.

Coffee and fruit are becoming an increasingly popular combination, according to menu research firm Datassential, which said that mentions on menus of coffee items with fruit have increased by 64% over the past five years, with the fastest-growing flavors being orange, lemon and coconut. 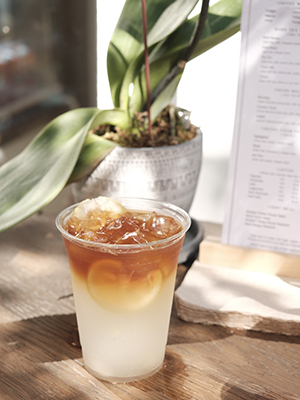 Photo: The Twilight coffee juice, which is made with lemonade, from Meno.

That’s followed by pumpkin, thanks to the continuing spread of pumpkin spice drinks in the fall. But cherry, undifferentiated “berry” and blueberry have all grown by more than 50% in the past four years.

Datassential says fruit is now mentioned in 4.4% of coffee drinks. It has become widespread enough that Dunkin’ has been testing coffee-fruit combinations at select locations in New England.

Martin Hudak, global coffee ambassador for Mr. Black Spirits, which makes a cold brew coffee liqueur, said that berries tend to go will with naturally processed coffee from South America, while citrus is “amazing” with washed coffees from Africa.

He added that he likes tropical fruits such as mango, passion fruit and pineapple with espresso drinks, whereas he likes “heavier and sweeter fruits” such as berries with filter coffee.

“When you add a different type of acid, it adds a different kind of floral note to it,” she said. “I don’t know what it does, but I know it works.”

One of her drinks follows Hudak’s approach and combines dark chocolate with passion fruit and espresso in a demitasse. Paul said it was inspired by a cup of hot chocolate she had at Angelina in Paris.

“It was so floral and bitter that it super-reminded me of passion fruit. My whole point was to recreate that,” she said.

In another drink she combined raspberry with Turkish coffee and Cognac, and served it with a side of whipped cream mixed with pistachio paste.

“It was kind of deconstructed,” she said. ”You could add what you wanted to the coffee.”

“Having those challenges where I know I want to serve coffee or tea, but it has to go with the dessert as well, you have to stretch the boundaries, and you realize what surprisingly works great,” she said. 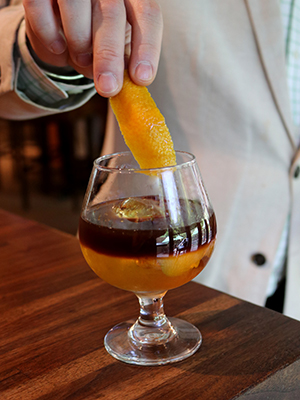 Photo: The Carajillo drink, a traditional cocktail of espresso spiked with Licor 43 — a Spanish vanilla-flavored liqueur — shaken and poured over ice to give it a frothy head from Rainbow Lodge.

One favorite of hers was a New Orleans inspiration for which she made that city’s traditional café au lait — strong chicory coffee mixed with boiled milk, and added dark chocolate and orange peel. She said it reminded her of the chocolate shaped into oranges during the holidays.

At Rainbow Lodge in Houston, beverage director Marc Borel is serving his own version of a Carajillo, a traditional cocktail of espresso spiked with Licor 43 — a Spanish vanilla-flavored liqueur — shaken and poured over ice to give it a frothy head.

“It’s delicious,” he said. “It’s a classic and it’s been around for ages.”

Borel amps it up a bit, first by mixing the Licor 43 with an equal amount of Ilegal reposado mezcal. He pours that into a brandy snifter with a spherical ice cube that has had a large twist of orange squeezed into it. Then he floats a shot of espresso on top and garnishes it with the orange peel.

“I think that orange goes really, really well with coffee,” he said, for the same reason that orange and coffee go together: “It’s dry and it’s bitter and it leaves the mouth wanting something bright and refreshing.

For this particular drink Borel uses espresso from a local roaster that has some acidic notes and orange-like acidity, “which is why I think the orange goes really well with this blend of espresso.”