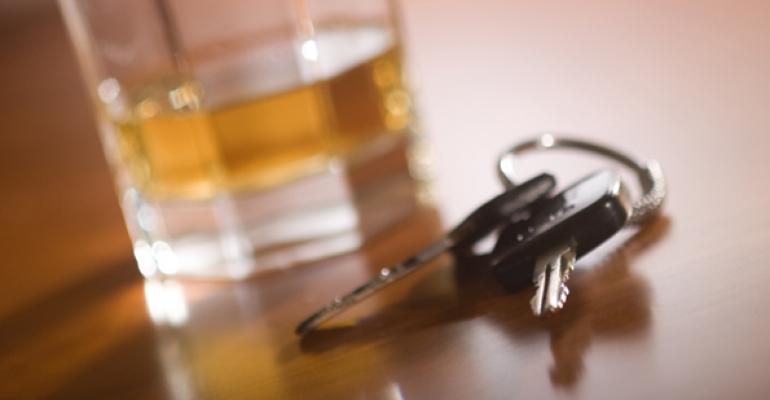 That second glass of wine? Another pitcher for the table? A nightcap at the end of the meal? Restaurant operators can kiss these and similar sales opportunities goodbye if the National Transportation Safety Board (NTSB) gets its wish to lower the legal limit for drunk driving from the current 0.08 percent blood alcohol content to 0.05 percent—a reduction of more than one-third.

And that might not be the end of it. Read the NTSB’s announcement of this initiative and you’ll notice the ominous phrase “0.05 or lower” (italics ours). Reducing the blood alcohol content (BAC) limit is a key feature of NTSB’s new “Roadmap to Reaching Zero” initiative, with zero being the number of alcohol-related driving deaths the NTSB would like to reach.

Here’s the argument for the proposed BAC standard:

“New approaches are needed to combat drunken driving, which claims the lives of more than a third of the 30,000 people killed each year on U.S highways—a level of carnage that has remained stubbornly consistent for the past decade and a half. Our goal is to get to zero deaths because each alcohol-impaired death is preventable," NTSB Chairman Deborah Hersman says. "Alcohol-impaired deaths are not accidents, they are crimes. They can and should be prevented. The tools exist. What is needed is the will."

It’s an admirable goal, but the proposed method of reaching it has stirred up plenty of opposition.

“This recommendation is ludicrous. Moving from 0.08 to 0.05 would criminalize perfectly responsible behavior,” says Sarah Longwell, managing director of the American Beverage Institute.

“This is the latest attempt by traffic safety activist groups to expand the definition of ‘drunk,’” she adds. “A little over a decade ago, we lowered our legal limit from 0.1 percent after groups like Mothers Against Drunk Driving (MADD) assured the country that, based on all the science, 0.08 BAC was absolutely, unequivocally where the legal threshold should be set for drunk driving. Has the science changed? Or have anti-alcohol activists simply set their sights on a new goal?”

Longwell singles out MADD, but MADD is surprisingly lukewarm on NTSB’s proposed new standard, indicating only that the group would not oppose it. MADD now concentrates its efforts on hardcore alcohol abusers, and group spokesperson J.T. Griffin told the New York Times that the NTSB proposal was “trying to focus on a group of people who are more social drinkers, who haven’t been targeted in a while.”

The 0.05 BAC standard is the same one that is in place in more than 100 countries worldwide. Only the U.S., Canada and Iraq adhere to the 0.08 standard.

How likely is it that the 0.05 BAC level will become the law of the land? The NTSB cannot impose it outright; it can only suggest that states adopt it on an individual basis.

Not that the federal government can’t encourage them to do so. States “chose” to reduce the BAC threshold from .1 (or higher, in some states) to .08 only in the wake of a 2000 federal law that would have withheld federal highway construction funds from states that didn’t adopt the newer, lower standard.

Experienced Washington watchers suggest that in the current political climate, it would be unlikely that a bill with a similar coercive provision would make it through Congress. So restaurants can go ahead and keep offering late night happy hours and other revenue-boosting promotions that encourage customers to drink alcohol. Just be sure your state and local restaurant associations are staying on top the 0.05 BAC issue where you do business.