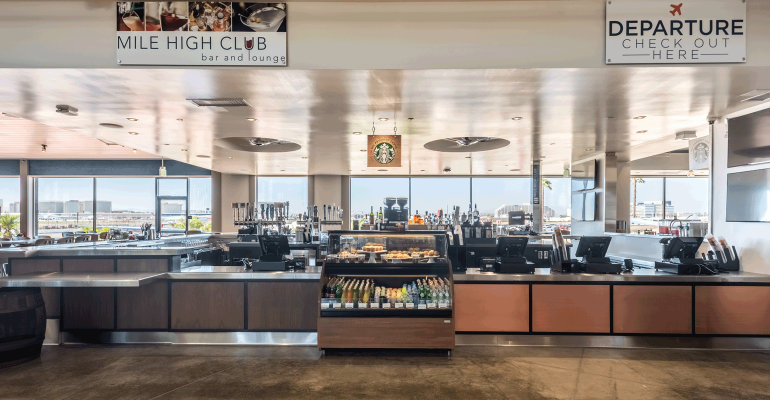 The Proud Bird soars into future

The restaurant, with a panoramic view of the airport’s runways, was the first of what became many aviation-themed concepts operated around the country by Anaheim, Calif.-based Specialty Restaurants Corp., or SRC. The group’s late founder, David Tallichet, was a World War II pilot who flew B-17 bombers and had strong ties to the aviation world.

Just how strong those ties were — and how important the restaurant was to certain Los Angeles communities in particular — wasn’t really known until the family-owned company announced plans to close The Proud Bird in 2014.

“I started getting phone calls, and they were almost threatening, saying ‘How could you do that?’” said John Tallichet, son of the founder and now SRC’s president and CEO. “The community was really up in arms.”

That’s in part because, for the African-American community in neighborhoods near the airport, The Proud Bird had become over the years a restaurant and event space where they were welcomed when others turned them away. For many, it was a piece of their history they didn’t want to lose. “I had a few really impactful phone calls,” Tallichet said.

One caller explained how many hotels across Los Angeles refused to host the prom of Centennial High School in Compton, but they were embraced at The Proud Bird.

The community began to rally, saying they planned to go before the airport commission to save the restaurant, with or without SRC, Tallichet said.

That put the company in a difficult spot. The Proud Bird needed some serious investment to make it competitive again. Add to that the fact that labor costs were climbing, with airport venues under a higher-than-minimum wage mandate. Currently, minimum wage at the airport is $17.26, he said.

But there was no denying that the community wanted the restaurant to stay. So, as SRC signed a lease extension for another 20 years, the decision was made to completely overhaul the 50,000-square-foot property.

Earlier this year, a vastly improved version of The Proud Bird debuted with a runway-side restaurant and food hall, along with the large event spaces and an aviation museum where visitors can learn about B-17s like the Memphis Belle, alongside the heroic Tuskegee Airmen of World War II.

In addition to the various food bazaar outlets, the Proud Bird hosts an “unlimited” brunch for $29.95 (or $19.95 for kids ages 5-12) on weekends. There’s the Mile High Club Bar and Lounge with aviation-themed cocktails, as well as six banquet rooms.

And free parking, which is a great advantage at an airport like LAX.

Overall, the group invested close to $11 million to rework the property over about 16 months. The Proud Bird isn’t located at the main terminal, but in a separate building at the airport. Tallichet predicted that events will account for about 70 percent of sales.

But the growing technology community at “Silicon Beach” is also very near the airport. A new football stadium is under construction in nearby Inglewood, and Elon Musk has promised to build a tunnel from LAX to his SpaceX headquarters in Hawthorne, Calif. Those with fond memories of The Proud Bird’s early years won’t be around forever. But the new-and-improved iteration is well positioned for the future, Tallichet said.

“When people come back to visit, they’re blown away by what they see,” he said. “It’s been fantastic, the feedback.”

Paul Kahan and One Off Hospitality transform The Publican into a ski resort on the streets of Chicago
Dec 16, 2020