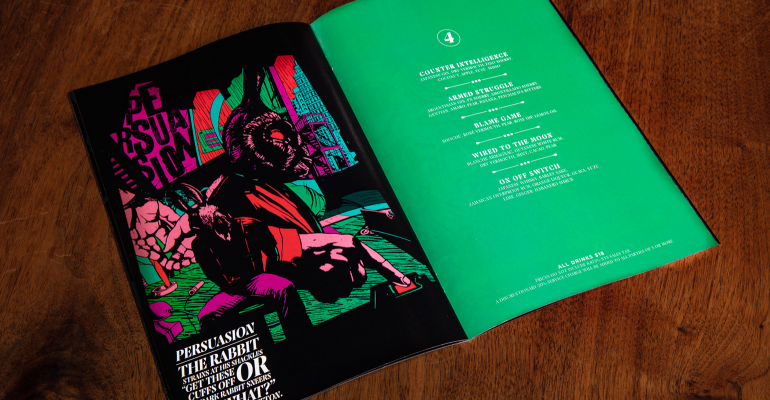 To the casual customer, the award-winning New York City bar The Dead Rabbit is a three-story, cocktail-forward pub known for its Irish coffee and extensive Irish whiskey selection. But for co-founder and co-owner Sean Muldoon, the concept is a burgeoning multimedia brand with potential for the big screen.

In 2016, the Dead Rabbit was named “The Best Bar in the World” by the World’s 50 Best Bars, a testament to the quality of the bar’s mixology program. But since opening the bar in 2013, storytelling has become an equally fundamental part of the business’ brand, setting it apart from dozens of New York City bars serving up pricey egg-white-foam-topped cocktails. 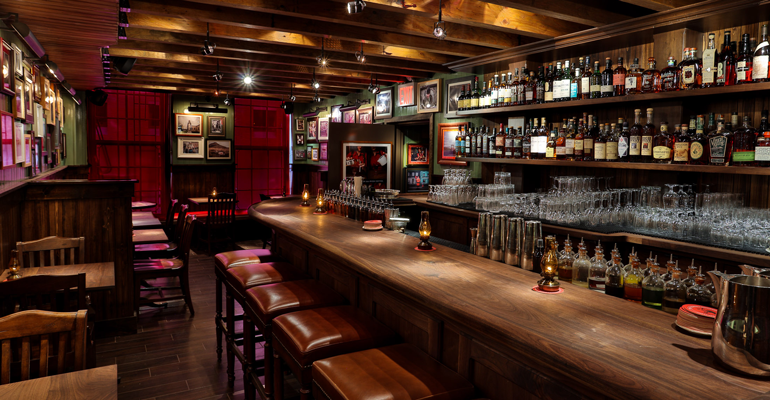 In the Parlor – the bar’s more intimate second floor — a carefully crafted cocktail menu details the escapades of the pub’s mascot, an anthropomorphic Rabbit crime boss and comic book star. The Rabbit was originally modeled after John Morrissey, the real-life leader of the mid-19th century Irish-American street gang, the Dead Rabbits.

After a kitchen fire last summer forced the bar to close for a few weeks, Muldoon’s team moved forward with their plans for an extensive renovation that doubled the pub’s size, adding two new rooms, 150 more seats and about 2,500-square-feet of space. The renovations were completed in phases earlier this year.

Now Muldoon wants to write Rabbit’s next chapter as a comic book, and possibly even as a movie or TV franchise.

“This is my chance to let people know that I’m in bed with this brand; this story is in my blood,” Muldoon said. “Not everyone who comes in here wants to be told a story, but most people who come here do. If that’s not what you want, then there are a million other bars.”

The Rabbit has become an anti-hero character in his own right. He even appears at Dead Rabbit events in his signature ears and suspenders and has become a favorite among regular customers.

Each menu iteration features a new increasingly elaborate adventure for the Rabbit. The latest menu — which launched in March — is called “Darkland” and represents the first chapter in a new six-chapter arc for the character. 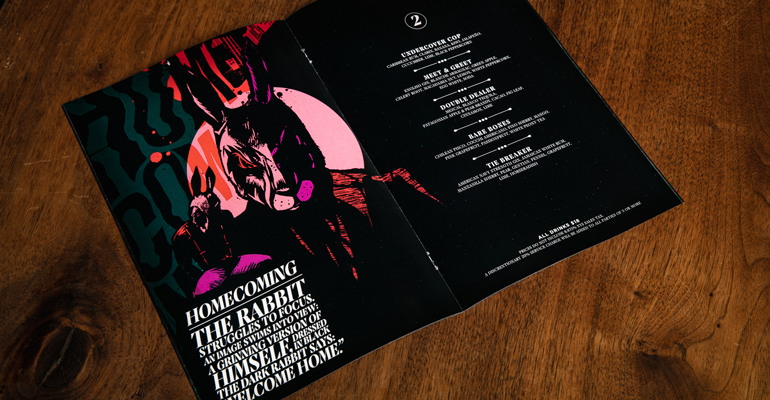 The menu’s 30 handcrafted cocktails were curated by beverage director Jillian Vose and correspond to events within the story. In the first chapter of Darkland, for example, the Rabbit grapples with his own immortality, juggles shady deals with a demon rabbit, and finds himself behind unsolved crimes throughout history, all against the backdrop of a Blade Runner-esque dystopian alternate universe.

At $18 per drink, Darkland-themed cocktails are designed to build up from lighter drinks to heavier drinks as the reader/imbiber “makes their way into the darkness.” Among them are options like the Undercover Cop, made with Caribbean rum, banana, kiwi, jalapeno, cucumber, lime, and black peppercorn; and Prisoner of War, made with scotch, cherry brandy, Armagnac, almond, strawberry, lemon, absinthe, bitters and a whole egg, with ingredients hinting at the fictional events in the menu’s pages.

Muldoon worked with their design team to transform a previous menu — originally 15 pages of illustration and five menu pages— into a 20-page comic book and is pursuing publication to make it available in retail stores.

From there, the Rabbit’s story could go in several directions, he said.

Muldoon is working with an unnamed writing team to get a “movie treatment” done. The issues will be divided into four seasons of six episodes. Currently, the writing team is putting together a script for the story’s pilot in order to pitch it to television executives. The team has also put together a few unreleased teaser trailers to conceptualize their story as a movie, and the next step would be filming a full two-minute trailer. 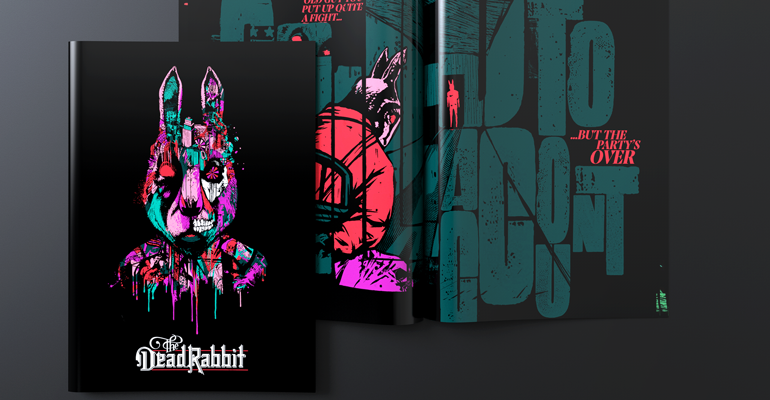 “Having this Rabbit guy walking about the streets is a bit mad but today with the popularity of Marvel films, it’s the right time to pursue something like this,” Muldoon said. “[Our customers] all think it’s wacky of course, but we’ve got the support we need. In this day and age, you need to do something to stand out.”

But even if Muldoon sells the film rights, he never plans on abandoning the bar itself. In fact, The Dead Rabbit just launched a new brunch menu and still has plans to improve upon the quality of their Guinness service.

“If we get a Dead Rabbit film, that would be great, but the bar is immortalized now and it will never go away,” Muldoon said. “We started out as historic, but we’ve evolved over the years to something contemporary, cutting edge and badass. That’s who we are now.”

Heirloom Hospitality’s Jeremy Sasson on meaningful growth and change in Detroit and beyond
Jun 15, 2021