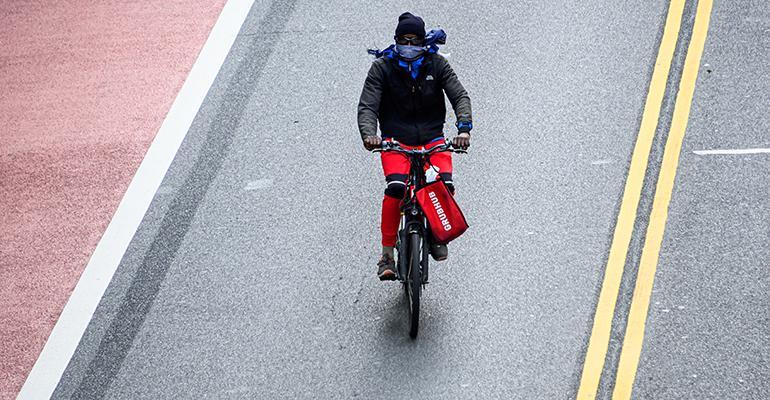 A new battle is erupting among Grubhub and New York City leaders over a proposal to extend the city’s temporary cap on delivery commission fees, a relief effort that is expected to end next month.

Back in May, New York City leaders capped third-party delivery commissions at 20% to help restuarants during the pandemic. The cap is set to expire Sept. 18, prompting city leaders to propose extending it through next year.

In a countermove, Grubhub this week launched a campaign directing New York diners to protest what the company is calling a “food delivery tax” on consumers. The Chicago-based company, which plans to merge with Amsterdam-based Just Eat Takeaway, maintains that consumers pay higher fees when restaurant commission caps are lowered.

The company is suggesting New York diners send this message to local lawmakers: “This new food delivery tax will make things worse: New Yorkers will pay more, local restaurants will receive fewer orders, and delivery workers will earn less. It’s wrong – any way you tax it. My message is simple: say no to a food delivery tax and get your hands off my deliveries.”

When asked how much more consumers are paying in New York, Grubhub would not disclose any data.

“While we don't have exact data to share, it's clear that fees go up for diners since Grubhub needs to make $4-5 per order to cover marketing services for restaurants, fixed driver costs, and other hard costs to operate our marketplace,” the company told Nation's Restaurant News in a statement. “Unfortunately diners bear an increased cost when restaurant fees get capped.”

Councilman Mark Gjonaj, who has criticized the marketing tactics of Grubhub, said the delivery company is launching a campaign to end a relief effort that has prevented many locally owned restaurants from closing.

“Make no mistake about it. This is a corporate attempt to gaslight New Yorkers and blur the truth,” Gjonaj said in a statement.

Gjonaj, who chairs the city’s small business committee, said New York City’s current unemployment rate is 20.4% and a disproportionate number of people who have lost jobs work in the restaurant industry.

“Instead of fighting for the ability to gouge restaurants with sky-high, business-killing commissions, it would be far more helpful if the company [Grubhub] committed to focusing its energy on helping its restaurant partners get back on their feet and save their employees’ jobs,” he said. “Now is not the time for runaway corporate greed.”

Third party delivery fees have long been controversial as restaurant owners say hefty rates, which can run as high as 30-35%, hurt already thin profit margins. The pandemic has fueled the debate over fees as restaurants became reliant on delivery revenue during stay-at-home orders.

Restaurant delivery companies argue that fees pay for a combination of fixed costs, and tailored marketing that helps drive order volume. Caps, they maintain, result in fewer orders for restaurants and higher prices for consumers.

When asked if Grubhub would mount similar campaigns in cities with fee caps, Grubhub said: “We're starting with NYC.”