“Jittery” consumers, tight labor and choice overload in delivery options are weighing on the outlook for restaurant operators, a new AlixPartners study indicates.

While many economic indicators remain strong, consumers are showing signs of fatigue, according to the authors of the global consulting firm’s annual survey, which polled more than 1,000 U.S. consumers in February.

“If you peel back the onion, the consumers are feeling jittery,” said Adam Werner, global co-head of AlixPartners’ Restaurant, Hospitality and Leisure Practice and a managing director at the firm, in an interview Wednesday.

Survey respondents were asked to “define value” and generally, in past surveys, the top attribute would be “quality” as No. 1.

“This year, in particular, price really leap-frogged up, especially among Millennials,” Werner said. “It’s a different dynamic than we’ve seen In the past.” 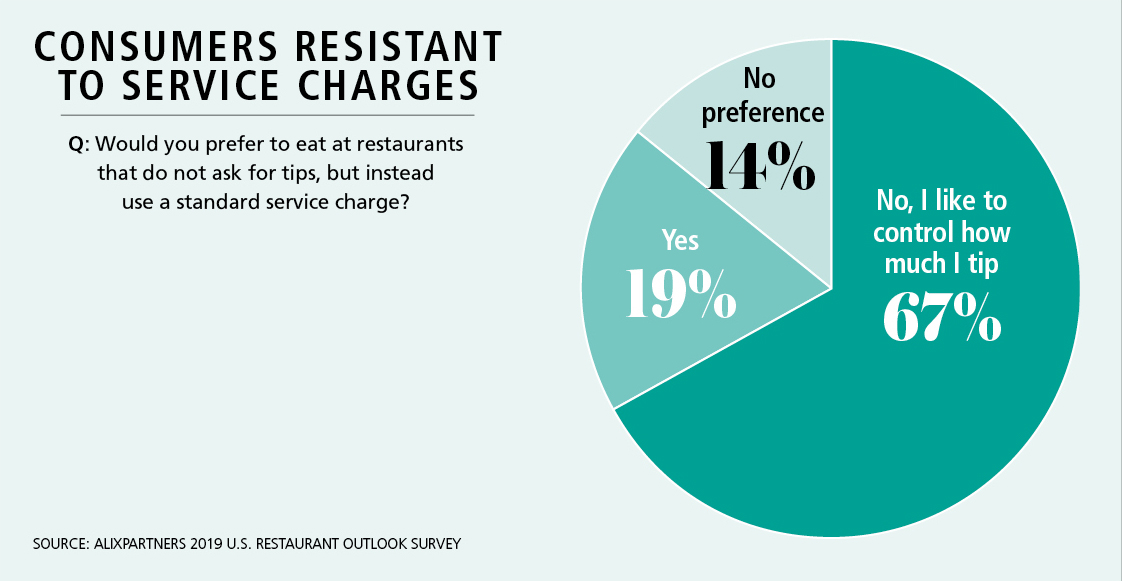 In last year’s survey, Baby Boomers who said they wanted to dine out less indicated they would put that savings toward retirement savings and Millennials and Gen Xers would devote that money to travel or lifestyle experience.

That changed in the 2019 survey, Werner explained.

“It’s all about saving money,” he said. “The environment we are in today — with the lowest of lows in unemployment — and compare and contrast that with consumer sentiment, there’s a little bit of a miss.”

Kurt Schnaubelt, a managing director in AlixPartners’ Restaurant, Hospitality and Leisure Practice and a survey author, added that consumers are seeking out value.

“Among consumers who say they are pulling back are really pulling back for financial reasons heavily,” he said. “There is a sense that the reallocation of funds is critical to them. Frankly, they are looking at overall price and overall dollars spent. We think that is pretty meaningful to the restaurant business in terms of value. They aren’t saying they will stop going. They are saying, ‘We want to be really careful when we do go out.’” 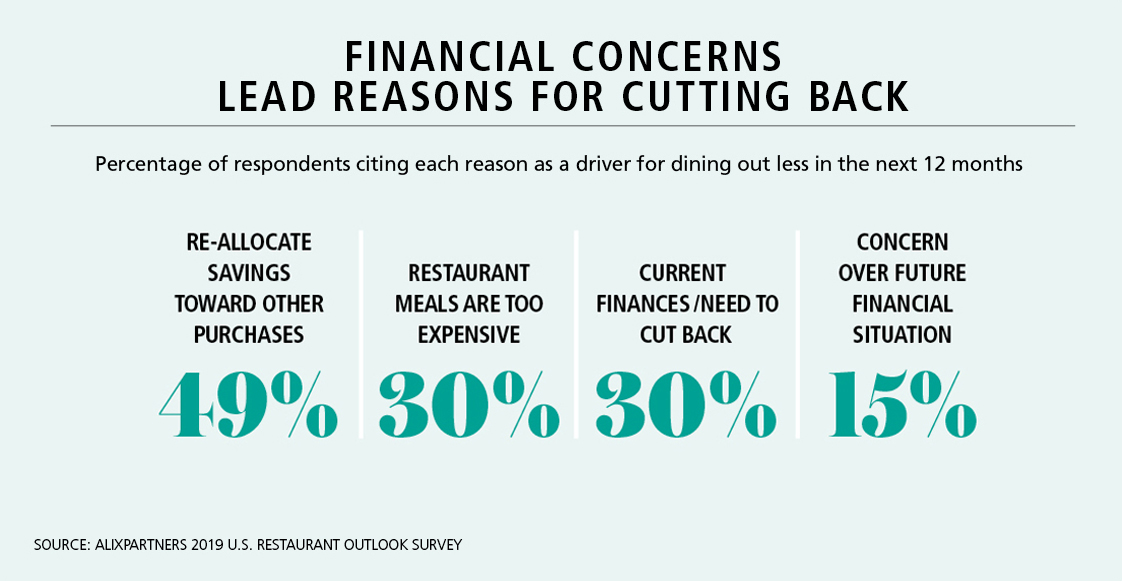 To address the pricing concerns, Werner said that in years past coupons had prominence, but not in this year’s survey. “There is some trade-down occurring,” he added, noting that respondents who used to patronize fast-casual are trading down to quick-service restaurants.

The survey found 38% of consumers plan to use discounts, such as coupons and promotions, to reduce their restaurant spending in the year ahead, down from 46% in the survey of a year ago.

Survey respondents who expected to dine-out less in the year ahead could choose from among 15 options about why they planned to cut back, and financial concerns were up eight percentage points from the same poll a year ago.

In particular, this year’s survey found 49% said they plan to reallocate savings toward purchases other than restaurant meals, 30% said restaurant meals are too expensive, 30% said their current finances mean they need to cut back on spending and 15% said they’re concerned about their future financial situation.

The survey found that consumers in this year’s survey ranked dining in fast-casual restaurants and at convenience stores as about the same, he added.

“Now it seems every convenience store chain, even the big ones like 7-Eleven, are ramping up their fresh food offering,” Schnaubelt added. “If I’m in a restaurateurs’ shoes, I’m really looking at those guys as a share-of-stomach stealer.” 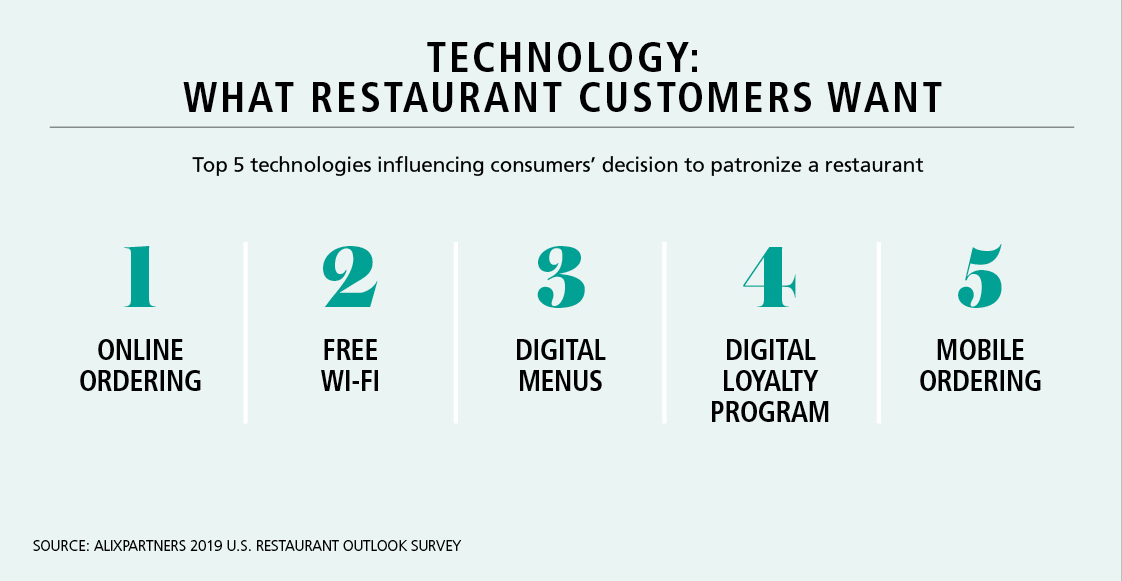 Schnaubelt said operators can appeal to wider swath of consumers if they offer pricing variety on their menus, with something low priced as an option for the consumers who are watching their pennies.

Werner suggested that over the next 12 months, the $5-to-$10 dining occasion will ramp up while the $10-to-$20 occasion will decline.

“Even the fast-casual occasion is at $9 to $11 or $12 per person, so it leaves QSRs and convenience stores, interestingly enough, in the catbird seat to drive those occasions,” he said.

Schnaubelt added that quick-service restaurants and their long-term value menus can drive traffic to the price-sensitive consumers. The QSR segment also is strong in the growing “snack” occasion is poised to take advantage of technology platforms in a bigger way, he said. 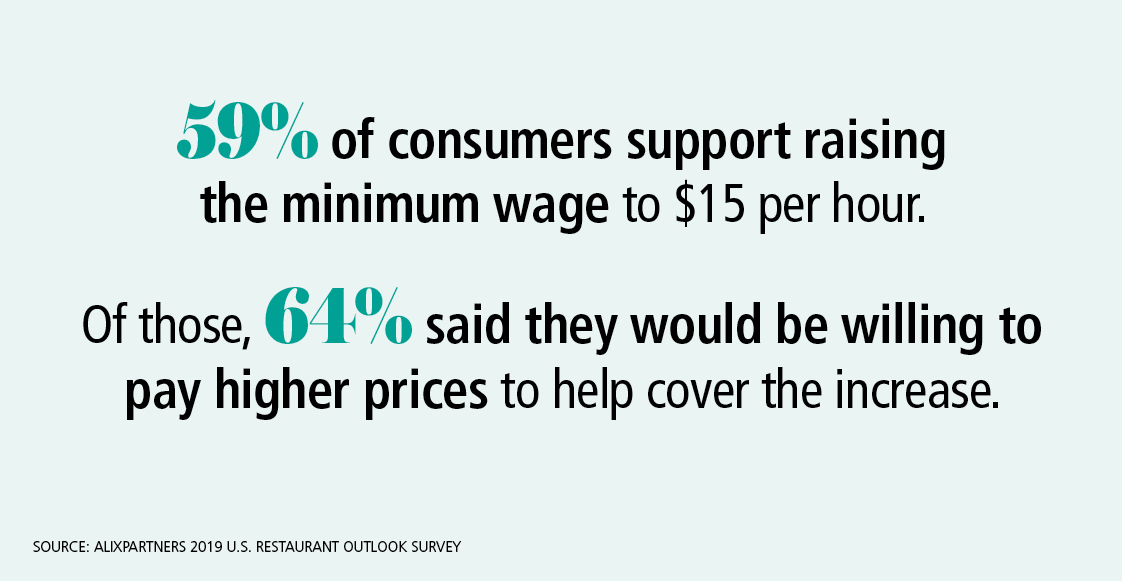 Some other issues addressed in the 2019 survey:

- Tipping. “People hate it,” Werner said. “The European model is not well-received here in the U.S. The automatic gratuity just doesn’t resonate well with the U.S. consumer.” About 67% of respondents said they disliked automatic service charges, up 2 points from last year’s survey. However, Schnaubelt said Millennials are the least likely to be against the service-included model.

- Technology investments. “Whatever technology investment you can make to mitigate labor costs is critical,” Schnaubelt said, be that kiosks or, to a much lesser extent, robotics. “Getting labor reduced is No. 1. … The second is online ordering.” That should be from the web or consumers’ mobile devices directly into the point-of-sale system, he added. The use of software for marketing analytics and knowing the customer are important, Werner added, so messages can me micro-marketed to the individual.

AlixPartners 2019 U.S. Restaurant Outlook Survey polled 1,001 consumers ages 18 and older between Feb. 14-19, across major regions and demographics in the United States. AlixPartners has been conducting the survey since 2009.