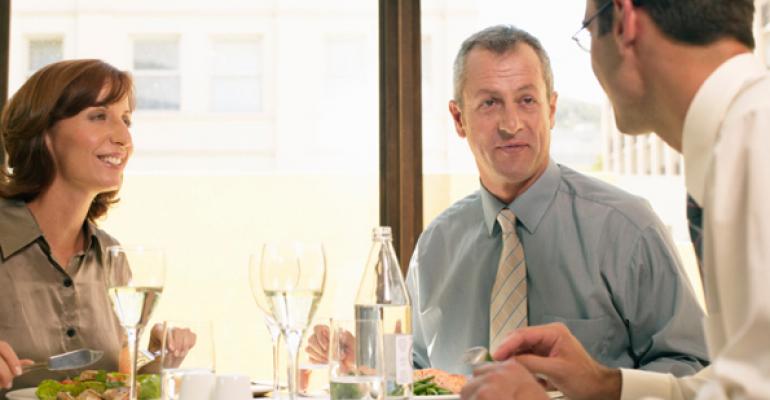 The recession may be over, but not the cost-cutting that got many Fortune 500 companies through the downturn. That’s the conclusion of Vic Macchio, whose company’s data shows corporate dining fell 2.5 percent last year, with fine-dining restaurants taking the biggest hit at 15 percent.

Dinova, the company he founded in 2009, connects some of the biggest U.S. companies to a network of preferred restaurants, so the corporate clients can earn rebates when their employees dine in network. The analysis is based on more than two million employees of companies in Dinova’s network, who spent $700 million on corporate dining at restaurants in 2012. Per transaction spending was $50.78, down from $52.03 in 2011.

Casual-dining spend actually climbed three percent and fast-casual and quick-service restaurants grew nine percent, but the overall numbers were dragged down by the decline in the fine-dining segment. “Clearly there was a trading down and the biggest beneficiary was fast casual,” Macchio says. “Corporations are trying to curtail expenses, and some of our clients have jumped into dining management and said you can only go to these high-end restaurants with prospects or clients.”

It’s a concern flagged by Southlake, TX-based Del Frisco’s Restaurant Group in its recent SEC filing: “We believe the majority of our weekday revenues are derived from business customers using expense accounts and our business therefore may be affected by reduced expense account or other business-related dining by our business clientele,” read the filing from the owner and operator of high-end concepts Del Frisco's Double Eagle Steak House, Sullivan's Steakhouse and Del Frisco's Grille.

Dinova’s corporate clientele includes companies like IBM, Michaels, Siemens and Lockheed Martin, and there are approximately 5,500 restaurants in the network. All of Bloomin’ Brands 1,400 restaurants, and chains like Texas Road House, Ruby Tuesday, Au Bon Pain and Boston Market are partners. Smaller groups and independent restaurants in major markets are also represented, including Wolfgang Puck’s Las Vegas restaurants, Abacus in Dallas and the Buckhead Life Restaurant Group in Atlanta.

Dinova automatically tracks clients’ transactions—which are transparent to the customer, server and restaurant at the time of the sale—and rebate payments are later issued to the corporation. It’s the next step for companies already controlling and directing their staff to specific airlines, car-rental agencies and hotels for preferred pricing.

“This is a sign of the times and a continuing trend, rather than a blip for the restaurant business,” Macchio says. “We see continued desire to save money on business dining among the corporations in our network.”

This year got off to a better start, as Dinova’s client spending was up three percent in January, although Macchio isn’t sure if that’s a sign of things to come. He believes it may be pent-up demand after an especially difficult fall with Superstorm Sandy affecting so much of the East Coast, and then the usually slower month of December.

In January, the National Restaurant Association’s Restaurant Performance Index (RPI) did rise to its highest level in five months. Even better, the Expectations Index, which measures restaurant operators’ six-month outlook for same-store sales, employees, capital expenditures and business conditions, reached its highest level since May.