/sites/all/themes/penton_subtheme_restaurant_hospitality/images/logos/footer.png
Recent
Recent
French desserts take on East Asian flavors such as ube, guava and champorado
May 17, 2022
With the opening of Roca’s Pizza & Pasta, Alex Seidel returns to his roots
May 13, 2022
New on the Menu: Chicken skin with caviar and Southwestern dandan noodles
May 13, 2022
Okan Kizilbayir focuses on seafood at Salt restaurant on Amelia Island in Florida
May 13, 2022
Justin Sutherland shares cooking tips as wild Alaska salmon season opens
May 12, 2022
Featured
Savannah restaurateurs Mashama Bailey and Johno Morisano open two concepts in Austin
May 02, 2022
Denver's oldest brew pub, Wynkoop Brewing Company, is getting a fresh start
May 02, 2022
Chef Danny Grant opens café/gourmet market in Chicago with a European vibe
Apr 28, 2022
Rohini Dey’s Vermilion explores the Latin-tinged food history of India
Apr 27, 2022
The RH Power List
brought to you by 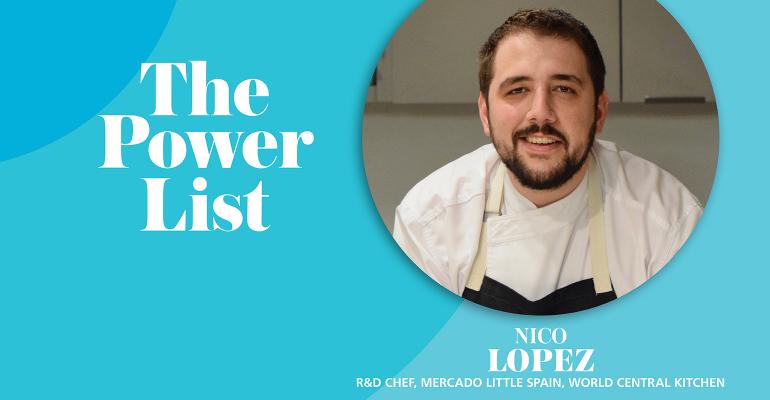 Nico Lopez, R&D chef, Mercado Little Spain, was chosen for the Power List by ThinkFoodGroup CEO and World Central Kitchen founder José Andrés for his creativity and leadership during the coronavirus pandemic. Here’s what else Andrés and company leaders had to say:

Chef Nico oversees all culinary operations at Little Spain, which comprises three full-service restaurants, three full-service bars, and nearly twenty food and retail kiosks highlighting the best of authentic Spanish cuisine. As part of his day-to-day, Nico supervises all production and execution on the culinary side, serves as a key on-the-record spokesperson for the Mercado and a surrogate for Chef Andrés, liaises with multiple departments within the Mercado and the ThinkFoodGroup home office, all while continuing to work on everything from menu development and recipe creation to creating new Mercado concepts like additional food kiosks. During the pandemic when restaurants were forced to close, Chef Nico oversaw the creation of 136,000 meals provided for the non-profit World Central Kitchen to feed those in need and fighting food insecurity.

Restaurant Hospitality talked with Nico Lopez Simpson about how creativity and resilience were key to his team’s community impact over the last year. Here’s what he had to say:

What’s the biggest lesson you’ve learned during this chaotic year?

I would have to say that the biggest lesson I’ve learned is that we are truly more resilient than we think we are. I’ve also learned that our resilience has come from honing into human connection and relationships. We, as a society, have quickly adapted to a new reality, all while supporting each other and lifting each other up. Working together, we have turned problems into opportunities by using creativity to overcome conflict. From being creative when it comes to having fun at home and communicating with loved ones, to coming together as a society, encouraging front line workers from our balconies every evening, to small businesses merging with the communities and pivoting their day-today to stay afloat, I have realized that depending on and trusting in human contact is the key to survival.

What are you most proud of in terms of company leadership and community impact as you look back at the challenges of 2020?

When we needed to close our restaurants, we soon found ourselves contemplating all the chaos that was happening around us. We quickly understood that we could not just stand with our arms crossed. We had the opportunity to contribute our “grain of sand” by doing what we do best, cooking.

We joined World Central Kitchen, the non-profit organization founded by our chef José Andrés, which is always ready to act in any corner of the world when adversity arises. WCK had already been operating throughout the country for weeks, and they were also beginning an extraordinary deployment in Spain for the first time. José characteristically raised his voice making an appeal to all his colleagues and collaborators, "let's unite to help those most in need."

In Spain, in an effort led by Carles Tejedor, thousands of volunteers united to produce 3 million meals for those in need. In the United States, the deployment was even greater: the whole industry united in different states, millions of volunteers stepped up, and tens of thousands of hot meals were distributed daily.

Our team quickly grew, and by combating  tension and fear of the unknown, we started producing 300 meals a day. As the situation became more grave, the need increased. Once again, the creativity and resilience of the team allowed us to go from producing 300 to 3000 meals a day in a matter of days. We came together as a team to work efficiently to cut down on time spent on meeting and planning but rather focus our efforts on executing our mission to provide a nourishing meal to those in need.

How are you or your company fostering diverse and inclusive future leaders of foodservice?

Creating a diverse and inclusive environment is about fostering an environment which not only brings together people of different backgrounds, but also highlights and celebrates the unique attributes that each person brings to the table. By listening to and providing for different needs of all of our employees, we are able to manifest a multicultural space where everyone feels comfortable to work.

The leaders of the future have to think globally and act locally, understanding that the wealth of an organization is not only its assets and heritage, but also its human resources and therefore they must know how to manage teams integrating all their circumstances and human particularities.

Okan Kizilbayir focuses on seafood at Salt restaurant on Amelia Island in Florida
May 13, 2022