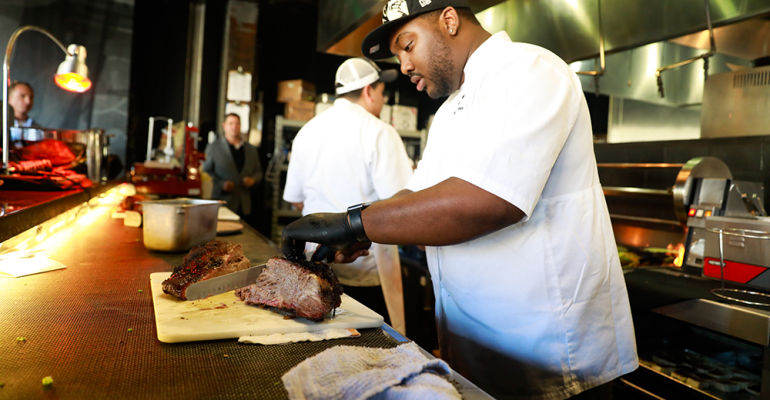 An early life of world travel with a mother who encouraged him to try new food primed Tristen Epps to work in his current job as executive chef of Mister Tuna, part of Troy Guard’s empire of restaurants in Denver.

The restaurant features a wood-fired grill and a menu that reflects Epps’ travels and sense of culinary adventure. That includes dishes like char-grilled octopus served with a northeastern Thai-style, sausage, the Yemeni-Israeli condiment skhug and a squid ink-colored black barbecue sauce made with the Korean chile paste gochujang and thickened with peanuts.

“But it’s still like a Southern barbecue sauce,” said Epps, who was born in Trinidad but moved to Virginia Beach, Va., when he was two years old. “It’s bright, it’s sweet, it’s spicy, it’s umami, it’s tart.” And it’s primal in a way that’s universal, he said. “When you eat the dish altogether it reminds you of a very ethnic barbecue that every country does, hitting all the notes.”

Epps’ was raised by his mother, who was in the military, and apart from her own cooking of Trinidadian food, she encouraged him to eat the local delicacies when she was posted in Japan, Guam and the Philippines. When he was older, he played soccer and ended up in Portugal to play there, and the local food grounded him in a way. 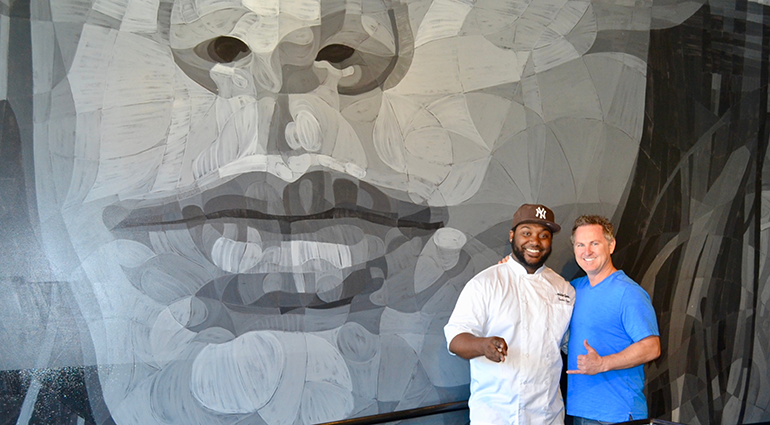 “When you don’t understand what’s on TV as a kid, the food channel was always a really easy thing to understand,” he said.

In high school in the U.S., he did what a lot of kids did and worked at chain restaurants, including McDonald’s, Applebee’s, Dave & Busters and Golden Corral.

He broke the rules a lot.

“When I worked at Golden Corral I was the guy who wanted to be on the grill all the time. Man, I was awful. I didn’t know a temperature to save my life. I used to always try to season it a little differently. I always got in trouble for it. I would try to put different sauces on it from other items. I remember making like a grilled steak mac & cheese and trying to put it on the buffet one time [mac & cheese with steak mixed in] and getting in a lot of trouble for it, because that’s not part of their thing,” he said.

Even at McDonald’s, cooking for himself, he would take the spinach from the salad and sauté it on the flat top, add cut up pieces of fried chicken “and kind of make little gratins with cheese,” he said. With a large griddle to play with, sometimes he’d bring in his own food to see what he could do with it. Noticing that the “grilled chicken” at McDonald’s was actually griddled on that flattop, he once brought in his own George Foreman Grill and tried to grill chicken with that.

“It’s very much a faux pas at McDonald’s to go off-script,” he said.

But he moved up in the world. He went to Johnson & Wales University in Charlotte, N.C., interned at Per Se, Thomas Keller’s fine-dining restaurant in New York City, and then worked at Tim Schafer’s at Lake Norman in N.C., followed by stints at Westin and Ritz-Carlton hotels, Bistro Laurent Tourondel in Charlotte, then a country club and finally The Greenbrier, a culinary landmark in White Sulphur Springs, W.Va. There, Epps was selected along with 14 others for the renowned apprenticeship program. He was among only five who completed it. 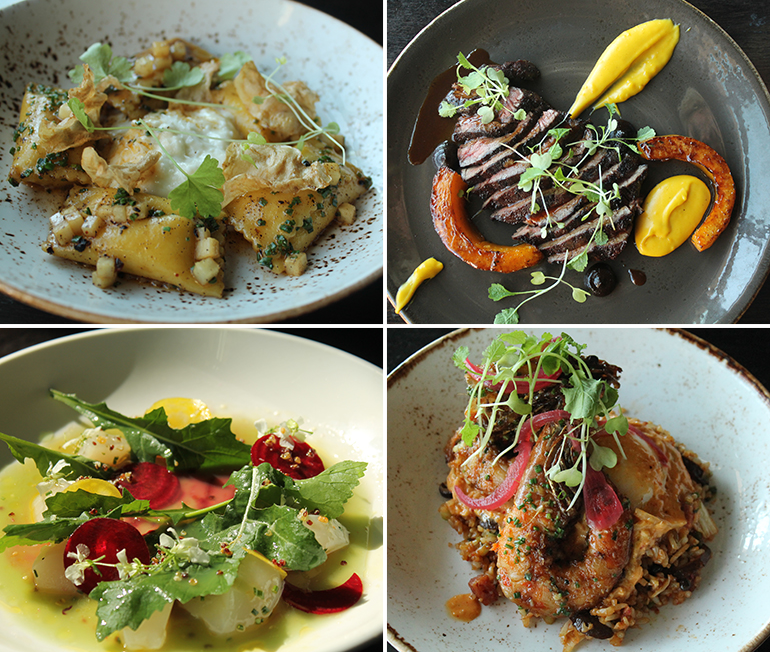 The Greenbrier’s executive chef at the time was Richard Rosendale, who represented the U.S. in Lyon at the biennial Bocuse d’Or culinary competition. Epps went with him, and not only saw Keller again but other supporters of Team USA, including Daniel Boulud, Bryan and Michael Voltaggio, Jérôme Bocuse and Gabriel Kreuther.

“I really got exposed to this much higher end of cooking and creating, and I was sucked in,” he said.

You might have seen Epps on the former ABC cooking competition series “The Taste,” where he was a finalist, or on a 2017 episode of “Chopped” on The Food Network, which he won.

“A lot of things I learned, at least when it came to cooking, was from TV,” he said. He’d watched celebrity chefs Emeril Lagasse and Bobby Flay, and the original “Iron Chef,” and as he entered the more rarefied culinary world and had the opportunity to meet people like them, he realized they weren’t jokers in the kitchen.

“They still are bad-ass chefs,” he said. “They’re not TV personalities; they’re chefs that ended up being on TV.”

One of the hosts of “The Taste” was New York-based chef Marcus Samuelsson, who gave Epps a job at Red Rooster, where he became executive sous chef.

“He really took me under his wing as a mentor,” Epps said. “It was finally what I was looking for: Someone who could talk to me, continually hear what I was researching or what I was thinking about in food, and help me focus it into a style of cooking.” 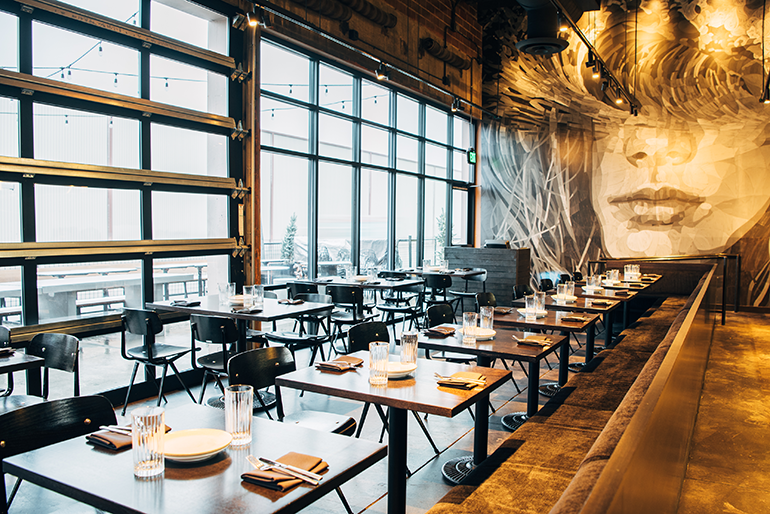 “Marcus always taught me not to be afraid of ingredients and to be open to techniques from any cuisine,” he said.

On “Chopped,” he was given beef kidneys to work with. Not a problem: “Marcus had made me use those before, whether I was comfortable with them or not.”

He served it with a pine nut-ginger purée and a salad Lyonnaise — a classic of frisée lettuce, lardons and a poached egg. For dessert he made a panna cotta of white chocolate and goat milk with sesame crumble and a super-spicy northern Thai green papaya salad.

Epps worked with Samuelsson for three years, traveling to Bermuda, Sweden and London and D.C. before finally striking out on his own and opening a restaurant in Brooklyn called Cooks & Captains, focusing on local eclectic cuisine.

TV saved him, though: Just watching it.

He was watching the new season of Bravo TV’s “Top Chef” and saw Troy Guard judging.

He asked his friend about Guard and she said his TAG Restaurant Group was opening all sorts of different concepts in Denver, from fine  dining to fast casual (and also a breakfast spot with the cute name of hashtag).

“I was in the way of thinking at the time: Is fine dining dead? Is casual what’s taking over? Is fast casual?” So meeting someone who was doing all of that appealed to him.

After a bit of traveling, once Epps was ready to go back to work, a recruiter brokered an introduction with Guard.

“He took me to every single concept, knew every single person’s name, where everything was in the cooler,” he said. “I felt like I already worked there after the tour.”

Perhaps what clinched the deal was a dish that already was on the menu at Mister Tuna: oak-grilled shiitakes poached in a court-bouillon, grilled over white oak and served with local kohlrabi marinated in preserved-lemon vinaigrette with a soubise — a classic French sauce of very slowly cooked onion.

“It was such a complex dish, and it’s vegetarian, and it kind of blew my mind a little bit,” Epps said. “That’s when I knew that this restaurant was for me.”

One of his more popular items recently has been duck cooked sous-vide and then served with a foraged nettle purée with Romanesco broccoli and honey-poached garlic.

Going forward, as the weather warms up, he wants to focus on local produce along with the great seafood he cooked with on the East Coast, as well as seafood from Hawaii, where Guard grew up, and to try to pass on his own spirit of adventure to other cooks.