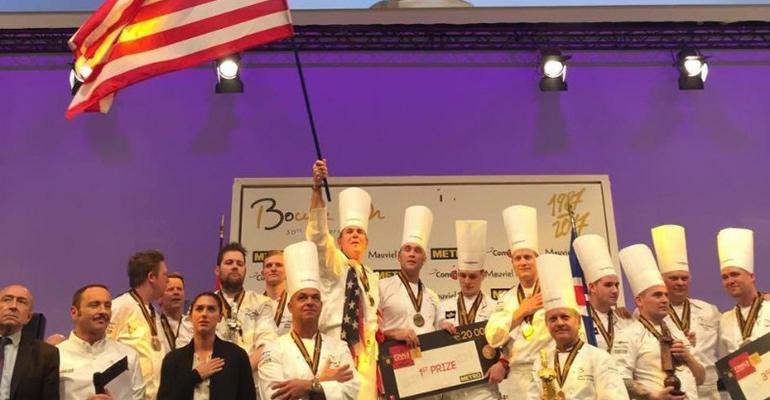 Team USA has opted not to compete in the Bocuse d’Or next year, the team’s organizers said.

The Bocuse d’Or is a prestigious biennial competition in which chefs from two dozen countries vie for top honors in preparation of elaborate dishes.

Hawaii-based chef Jeffery Hayashi, who had been chef de cuisine at Senia restaurant in Honolulu, was to lead the team, and William Barrera, who had worked at Roy’s Honolulu location would have been his commis.

Related: Daniel Boulud discusses how to help build the careers of young chefs in restaurants

Before then, the American competitors did not fare particularly well, but in 2008 a mentorship program, now called Ment’or, was established to select and train chefs for the competition. It was founded by American chefs Daniel Boulud, Thomas Keller and Jérôme Bocuse, son of legendary chef Paul Bocuse, who established the Bocuse d’Or in 1987. Ment’or has since expanded its activity beyond the Bocuse d’Or and provides grants for young chefs to train in high-end kitchens around the world.

Since the onset of the novel coronavirus pandemic, Ment’or has set up a Giving Fund to support struggling restaurant workers.

At the moment, Team USA wouldn’t be able to travel to the competition, anyway. It’s held at the SIRHA International Hotel, Catering and Food Trade Exhibition in Lyon, France, in January, and the European Union has banned most visits from Americans due to the continuing increase in COVID-19 cases in the United States.

“With the ongoing COVID-19 pandemic and the devastating impact it has had on the culinary profession, Team USA regretfully announces that we will not be able to participate at the 2021 Bocuse d'Or Finale in Lyon, France,” they said. “At a time when our profession has been crippled, it is important we stand up and set an example for our team, sponsors, supporters and communities regarding their safety, health, and overall well-being. As mentors in the culinary world, we also have a responsibility to both lead and support our colleagues and the broader culinary community at large. We are dedicating our efforts towards helping restore and ensure the long-term viability of our profession through our Giving Fund, as it is our duty to help those who contribute every day to our collective success.”

Visit the Ment’or web site to donate to the Giving Fund.