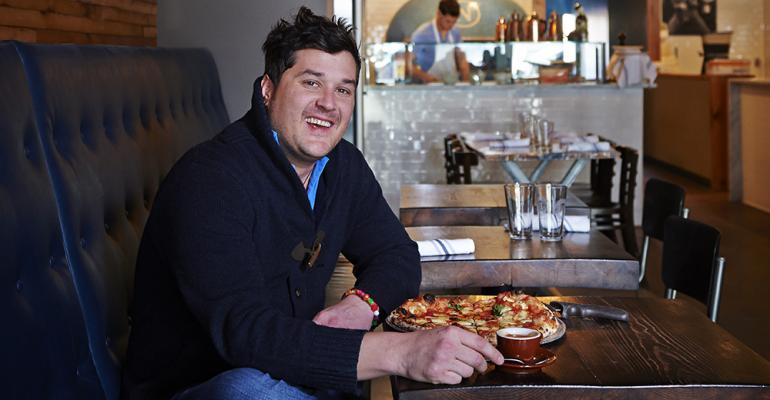 Mike Randolph brings fun and whimsy to the table at Privado

The St. Louis chef is In The Kitchen with senior food editor Bret Thorn

When I met Mike Randolph in April of 2017, he had a dream of opening a space that served just two meals a week — Friday and Saturday dinners of ever-changing tasting menus where the quality and technique were serious, but the food and setting were fun.

Six months later, that dream was a reality, and the people of St. Louis started oohing and aahing over delicate shiitake custards in eggshells with calamansi sabayon topped with Osetra caviar, and whipped tofu with lemon and local honey served with asparagus that’s charred on the outside and raw on the inside, finished with trout roe.

“The sweetness of the whipped tofu plays well with the trout roe,” said Randolph.

He has served steak with Béarnaise ice cream and ramp ice cream. For a while he was exploring Southeast Asian flavors, so guests got fermented green curry sauce refreshed with bright herbs, and aromatic vegetables cooked down with palm sugar and finished with lime juice and fish sauce. Privado serves 16 seats, one sitting per night, for meals ranging from 12 to 15 courses (or more).

That’s all served at Privado, in the space that used to be another of Randolph’s restaurants, an Italian place called Randolfi’s, which he closed last September after achieving good critical acclaim but limited economic success.

Privado is Randolph’s place to experiment and have fun, within reason.

“Anybody can make food that has shock value, but if they don’t follow up with concise flavors that make sense within the course of a meal…” he trailed off, his point made.

Hence the steak with Béarnaise ice cream. “That’s a fun way to do it,” he said. “If you just pull out one element and use a technique that they’re not accustomed to seeing, then it can be a lot of fun.”

Diners buy tickets to Privado in advance at $120 per person for a meal of between 12 and 15 courses, or more if Randolph feels like it, plus $85 for alcoholic beverage pairings or $35 for non-alcoholic ones — non-inclusive of tax and tip.

There are 16 seats, one sitting per night, similar to restaurants such as Momofuku Ko in New York City or The Catbird Seat in Nashville, but this format is new to St. Louis.

Meanwhile, Randolph has his Latin American restaurant, Público and, more importantly from a financial stand point, the two-unit Half & Half.

“All of my contemporaries that I admire, for every restaurant that they want Beard [Award] consideration for, they have a fast-casual concept that’s going to pay for their car insurance and their bills and their kids to go to college,” he told me last year as he and his wife Liz were planning to open their second Half & Half. Randolph experiments "with concise flavors that make sense within the course of a meal."

“That, quite frankly, is what Half & Half is. And I take pride in it: Great coffee, great food. But if it were just me, I probably would have taken the money we’re spending on Half & Half number two and open two more 65-seat concepts, but I have two daughters and a wife.”

Randolph has a history with experimental food. A native of Cincinnati and a graduate of the New England Culinary Institute, he ended up in Chicago at the height of the Molecular Gastronomy revolution, when Grant Achatz was conceptualizing Alinea and Homaro Cantu had opened Moto.

“It was amazing,” he said. “It was that time in Chicago. I remember interviewing with Alinea, to vacuum carpets or whatever. They didn’t have a space yet … I just had this really intense interview with Grant [Achatz] and Curtis Duffy and John Peters and those guys. I went into Moto the next day, and it was, like, jovial and fun and I just took a job as an unpaid intern on the spot.”

He ended up working every station.

“There was so much to learn, technically, and it was interesting, because Homaro knew how to do anything he wanted in the kitchen, but he didn’t want to do anything that vaguely resembled what he had done at [Charlie] Trotter’s,” the fine-dining landmark where Cantu cut his teeth.

But whereas most chefs at the time — and throughout history — started with a product and decided what technique to apply to it, Cantu started with technique.

“So he would say, ‘We have this ion ray gun. What can we cook with it?’ Every place else that I’ve worked, it was like, ‘We have this beautiful piece of pork, or radish. What technique can we apply to coax flavor out of it’?” Randolph has had "a lot of fun" bringing his specialties to the Privado table.

The results were fun and buzzworthy — edible printouts of sushi that did, in fact, taste like sushi; see-through polymer boxes containing fish that cooked at the table.

Inspired when he received a package in which the packing peanuts were edible, Cantu for a while was dressing an intern in a Fedex uniform and having him deliver a package with the guest’s name on it containing a course surrounded by edible packing material.

But did it taste good?

“Like, yeah, I guess. It tasted like dehydrated popcorn powder and togarashi or something like that, but it was that notion that food at that level should be about entertainment as much as it is about food.”

Although Randolph has returned to a more ingredient-forward type of cooking, he says he has kept some of Moto’s spirit with him.

“The enduring concept from Moto is that food should have a sense of humor, no matter what it is.”

Also, he said it’s important to interact with guests beyond, “OK, you’re the guest and I’m the chef. I’m going to cook and somebody’s going to drop it off at your table. That’s it. If you like it, you leave a tip, go home.”

That means even at his conventional restaurants he likes to have an open kitchen, and even before opening Privado he had one-off “Diversion Dinners,” which he was doing around two weekends a month at the original Half & Half location, which is closed for dinner anyway.

They turned out to be test runs for Privado, where Randolph continues to shy away from convention.

In praising the restaurant, Cheryl Baehr of the Riverfront Times wrote, “He's perfected every aspect of the tasting menu experience — the cohesiveness, the portion size, the flawless execution, the service, the drink pairings, the pacing — all while making what is so often a stuffy format easy, almost giggly, fun.”

That was Randolph’s goal back in April last year.

“We just have fun messing with people’s preconceptions of what fine dining is,” he said at the time.

“We take sourcing food and cooking food very seriously, but we don’t try to take ourselves very seriously. That’s kind of my motto, and I hope it emulates form the top.”