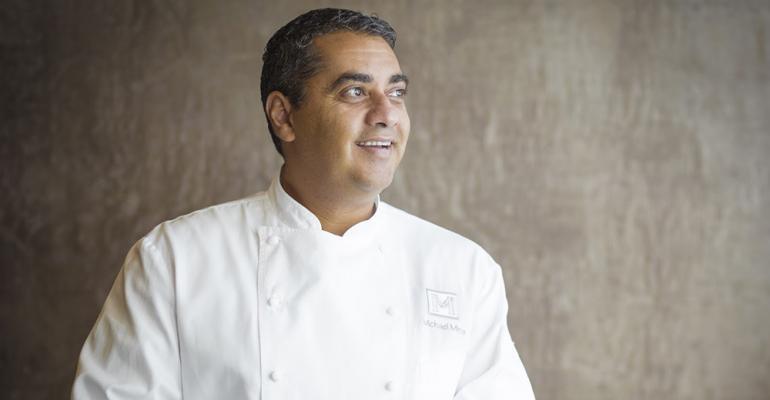 Michael Mina, the James Beard Award-winning chef and prolific restaurateur, was feeling this week as if the stars had aligned perfectly for his namesake restaurant that began years ago as Aqua, morphed into a “trio-focused” restaurant and has once again returned to seafood’s siren song with a refined and wow-worthy fish and shellfish game.

Whole fish arrive at the table without bones but with complex, bold, global flavors. A seafood display is designed to make even jaded high-roller jaws drop. And an oven is designed just for making Mina’s mother’s bread.

Mina caught up with Restaurant Hospitality about what’s up his sleeve with the new venture.

You have a lot of new influences on your new menu, and the space is different, too. How would you describe this new place?

I’m in a very blessed situation where I’ve had this restaurant in the Bellagio for 20 years. The first iteration was Aqua, and with Aqua I had a very clear vision and mission in mind: being a dynamic, upscale seafood restaurant. The second go-round was to make it Michael Mina and open one in San Francisco as well. And we had a great run here for the last 12 years, with the concept the way that it’s been. When you have a space in Las Vegas for 20 years, you’re very lucky, and the advantage I’m blessed with is that I really have always been in love with seafood, and that’s really how my career started. The first iteration of Michael Mina was less seafood-centric?

The old menu was more focused on trios — three preparations of one ingredient — and that was the focus, and it was very enjoyable, but it had gone through its time.

It had run its course?

Well, when the Bellagio approached me about doing a remodel and getting more space, that was the big driver to renovate the restaurant and the menu. So I wanted to take Michael Mina and make it one of the most dynamic fish restaurants in Vegas — again — that’s where it started as Aqua.

You were one of the first chefs to come to Las Vegas and help make it a true culinary destination.

The great thing about Las Vegas is there’s such an evolution in the properties and the city. And for seafood, what we had access to 20 years ago was nothing compared to what we have now. And what we had back then was very good. When I had the chance to remodel and do this enormous seafood display… I wanted a global fish restaurant bringing fish from all over the world, and that’s really how I cook.

What is it about Vegas and seafood? It’s seems counterintuitive that you can get some of the freshest seafood in the middle of the desert. Has technology made that possible?

Definitely technology, but also demand. At the end of the day, it’s easy to get everything here — great produce from LA, no problem. The main dining room of the Michael Mina restaurant.

Tell me more about the renovation.

We expanded the size of the restaurant. Now there is more of a casual lounge area with a raw bar in front, and we’ve put together a market list of fish, and you can try some crudos or sashimi or other raw bar items there. In the center, there’s a conservatory that’s part of the beauty of it. There’s a 20-foot window into an area that can be a private dining room or set for normal dining. The focal point is the fish display. The bar is remodeled and the booths in the lounge area set that area apart. We kept the chic feel, but it’s more approachable now.

Was it more formal before?

No, but it’s a more defined space now, into four separate seating areas. We’ve got beautiful linens on three-fourths of the tables (the ones in front are marble topped). A lot of décor for me is always about lighting and making women look beautiful. The colors and lighting will also make your staff look great, and they’ll be more confident.

It’s not just a change in décor?

We also expanded the kitchen and the menu; we added new elements to the kitchen.

So what kind of new equipment did you get for the kitchen that enabled you to expand the menu?

There’s an oven for my mom’s bread that we can now cook every piece of bread to order. It has its own station. And there’s a broiler for whole fish because a lot of menu items are centering around whole-fish presentations. We have one oven just for roasting hot shellfish. One of the really big components to the menu is the roasted shellfish. Traditionally, you’ll have your beautiful, pristine chilled seafood on the half shell — and we have that, too — but this is oysters, crab, lobster, charcoal-grilled with miso butter and presented on beautiful, hot rock salt at the table.

What are some new dishes and flavors that you’re most excited about?

We wanted to play with the Indian fish fry, with a lot of Indian and Middle Eastern spices, so you select a fish from the market list and we rub it with a little blanched ginger and garlic in a paste, and that’s what the crust sticks to. There’s a spiced green curry with all sorts of very fresh vegetables. Right now it’s snap peas, pea shoots, radishes and sweet potatoes. And the broiled fish…I’ve always enjoyed that fermented flavor with fish, so there’s fermented black beans and a confit of scallion. And a lot of bigger fish that are cut into steaks, like swordfish, we do that a little more on the Mediterranean side, with tomatoes, shaved fennel and citrus.

So you’re not hemmed in by just one cuisine or style?

That’s the focus — it’s a very global fish restaurant. We’re able to draw product from both coasts and all over the world, as well as drawing on flavors from around the world.

I’m interested in the Hawaiian flavors on your menu.

Broiled fish is right out of Hawaii. It’s those Polynesian flavors — sweet and sour — it’s fun to play with, and I love the way people dine in Hawaii. It’s everything shared, family style and a great spirit that I’m trying to bring to my menu. I have people in Hawaii who are fishing for me right now, and we’re getting four different fish from Hawaii.

You’ve also kept some of your signature dishes from the past 12 years.

The tasting menu is still there. The lobster pot pie is never coming off the menu. And also tuna tartare, caviar parfait and filo-crusted sole.

What does having a restaurant in Vegas for such a long time mean to you?

A big part of being a chef is being passionate, and obviously this is something I’m really passionate about, and this has always been a showcase for me.