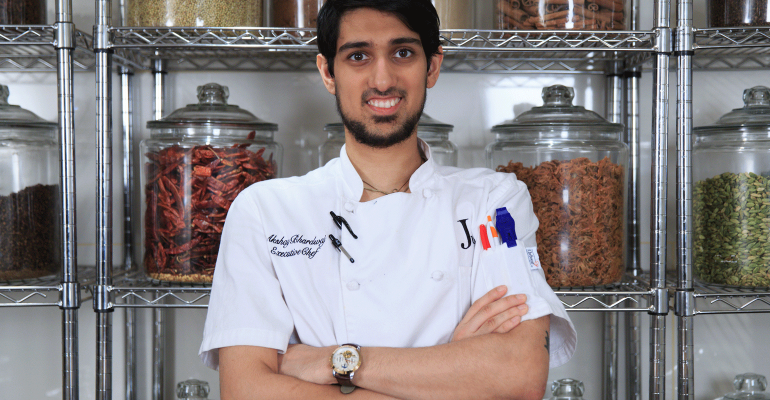 In the Kitchen with Akshay Bhardwaj

The would-be accountant who became executive chef of Junoon

Bhardwaj is the son of Rajesh Bhardwaj, owner of Junoon, New York City’s only Michelin-starred Indian restaurant. He was supposed to go into business, like his father.

But an uninspiring accounting internship turned his attention to the kitchen, where he cooks dishes like diver scallops with five-pepper coulis and orange marmalade, and vindaloo spice-rubbed smoked pork ribs.

Using the vast Indian palate as his canvas, combined with the influences of his American upbringing and sensibilities, Bhardwaj, now executive chef of Junoon, strives to make his mark on the Big Apple’s dining landscape.

A dash of skepticism

The restaurateur’s son admitted that those around him initially expressed surprise at his culinary ambitions.

“I think everyone, including myself, was skeptical about my becoming a chef,” Bhardwaj said. “I was pretty lazy; I sat behind the computer all day.”

After his first year studying business at Fordham University in the Bronx, N.Y., he got an internship working for the accounting firm that kept Junoon’s books.

“I don’t have anything against accountants or accounting, but I would say that I definitely wasn’t a fan of it,” Bhardwaj said.

“After a month of whining to the chef, he said, ‘OK, if you’re so bored, why don’t you take a couple of night shifts and work with us after you’re done doing the accounting?’” Bhardwaj had a choice: He could leave when he was done with the books and spend two hours standing on a packed bus going to his home in New Jersey, or he could spend that time in the kitchen until the traffic cleared up, earning him a comfortable 30-minute ride.

He chose to peel onions and chop tomatoes.

After Bhardwaj had spent a couple of weeks in the kitchen, the fry cook had to go to California due to a family emergency, and he found himself frying pakoras.

He asked the other cooks how long to fry them, and they said two minutes, meaning it in a general sense. But Bhardwaj, with his accounting training, took it literally and set a two-minute timer on his iPhone.

“We have a good laugh about that now,” he said.

Eventually, he got the hang of frying and started to look at the other stations.

“The first time it really caught my attention and I thought, ‘Wow, this is something really cool,’ was when the chef was plating one of the specials,” Bhardwaj said. “It was a fluke tarka.”

“The first time I saw that, I thought it was very artistic, the creative process behind it,” Bhardwaj said.

“I never would have thought you could do raw fish with Indian food. That’s when I started asking chefs actual questions besides, ‘How do I cut an onion?’ That’s when I really fell in love with it.”

Bhardwaj stayed at the fry station for six months before he began rotating through other stations.

“At that point, I really took the initiative,” he said. “They would schedule me at three o’clock or two o’clock, and I would come in at noon or 11 because I really wanted to pick up the pace on what I was learning.” Bhardwaj combines flavors from traditional Indian cuisines with flavor memories of growing up in the Northeast U.S.

That fueled him, as did his parents’ skepticism.

“I saw so many people doubting me,” Bhardwaj said. “I don’t even know if it was me really loving cooking to that extent, or it was these guys saying I can’t do it and I wanted to show them that I could. Then like turned to love, and there was no turning back at that point.”

Today, Junoon’s menu incorporates Bhardwaj’s background as an American and his sensibilities as a Northeasterner, as well as that of the son of immigrants from New Delhi.

Bhardwaj’s vindaloo pork dish was inspired by barbecued ribs that he ate growing up. Although chicken vindaloo is the norm these days, he discovered that the original vindaloo from Goa is made with pork — the Portuguese who colonized the Southwestern Indian state marinated it with garlic and wine. Indian chefs replaced the wine with vinegar and added their own spices, and a dish was born.

Bhardwaj’s version is smoked with charcoal and hickory chips after being coated in a spicy rub.

He plates it with pickled radishes and sunchokes sautéed with a North Indian combination of cumin, coriander and turmeric.

Another popular dish is Saloni Macchi, made from Atlantic salmon marinated for 48 hours in strained yogurt mixed with ginger, garlic, turmeric, white pepper and the restaurant’s garam masala blend.

The dish was on the menu before Bhardwaj became executive chef, but he made it his own by garnishing it with a vegetable he doesn’t like.

“That’s probably the most appreciated plating for that salmon dish in the six years that I’ve been here,” he said.

Bhardwaj encourages input from Junoon’s cooks, and he said they all share a vision, “which is exploring what we can really do with Indian cuisine, and being as imaginative as we can be, because we have such an awesome platform to do it.”