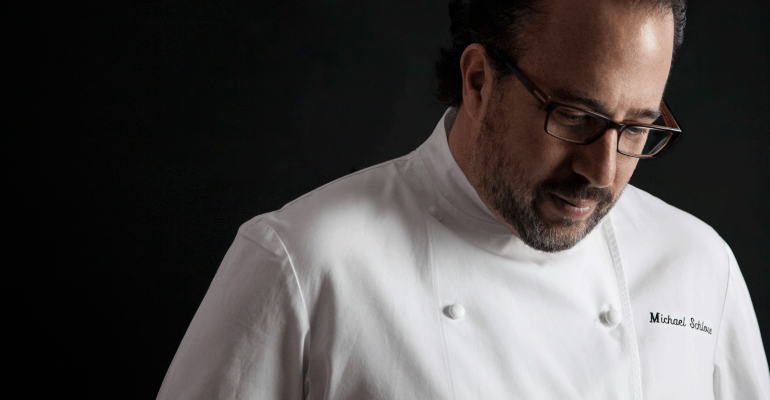 Culinary inspiration can come from many places. For Michael Schlow, one of those places is a bare kitchen.

Before he was married, he used to play a game with himself called “See If You Can Make Anything with What is Left in the House.”

“I literally would let my pantry and refrigerator run down, and I’d look in and say, ‘OK, there’s really nothing you can make here today,’” Schlow said.

Then inspiration would strike.

“I turned that into a dish that’s on the menu at Tico today. I mean, it’s got more stuff in it now, but that was the basis of it. “Or, I remember being in Spain, and everyplace I’d go, I’d get manchego with membrillo [quince paste]. At home, I had a piece of manchego sitting in the cheese drawer, nothing else. I was like, ‘Hmm, I don’t have any membrillo. I wonder if manchego can be fried?’ So I cut it into little squares, I breaded it, I fried it and I was like, ‘What can I serve this with? I’ve got some pomegranate juice and honey.’ So I made these little crispy things, and those are on the menu today at Tico with pomegranate honey sauce.”

Tico, with locations in Boston and Washington, D.C., are two of the 11 restaurants in Schlow’s restaurant group, which also operates in Los Angeles and Hanover, N.H. Schlow plans to expand to Detroit next year, and into airports in 2019.

Tico is Schlow’s only concept that “is authentic to no one,” he said. It’s influenced by his travels to Spain, Mexico and South America, “but it’s more about how those places make me feel, and the flavor profiles. But at no time, for example, at Tico would you ever find tacos al pastor, but [dishes] influenced by tacos al pastor, or influenced by barbacoa, churrasco or the tapas restaurants that I’d go to in Spain.”

He also operates Doretta Tavern and Raw Bar, a Greek concept in Boston; three Alta Strada locations, serving Italian food from Tuscany, Emilia-Romagna and Piedmont in the winter and the Amalfi Coast in the summer; New England-oriented Pine in Hanover, N.H; Cavatina, serving California cuisine in LA; coastal Italian restaurant Casolare in D.C.; and The Riggsby, a supper club and gin joint in the Kimpton Carlyle Hotel in D.C. “It feels like it’s been there for 100 years,” Schlow of the latter, adding that the space has an interesting, if completely fabricated, back story.

“It feels like the hotel got sold, we had a really good lease and never left, and they couldn’t kick us out,” he said. “There’s no sign. The designer created the door in the shape of a keyhole. It’s low ceilings and a super-cool space.”

The Riggsby serves “upscale American cuisine with distinctly European influences,” sort of like the Continental cuisine of the last century.

Schlow got his reputation as a fine-dining chef at Radius in Boston, which is now closed. Today, as an operator of multiple concepts in multiple cities, it’s up to his chefs to use their own inspiration for menu development, and for Schlow to empower them. “It’s this weird, happy fence you have to sit on, which is, they want your input, but only to a point, and you have to know with each person — and I think part of it’s their own personal success and where they are in their careers — how much influence they’re looking for,” he said.

Schlow often collaborates with them.

“I’ll taste with them, I’ll cook with them, but I let them drive the menus now,” he said. “I’ll say, ‘It’d be great to have another vegetable dish. Why don’t you play with Brussels sprouts?’ And then when they come back to me I might say, ‘Maybe a little spicier.’ That’s about as far as I will go.”

He said operating multiple restaurants is not that different from operating a single location. “You take the same mentality with one restaurant, that you can’t do it all by yourself, so you try and surround yourself with the best people,” he said. “Why can’t you expand upon that, as long as you don’t attempt to do it all by yourself? If you have a game plan, a strategy about how to grow and, also, you’re willing to trust people to do their job and do it well, with guidance and oversight and inspiration, it can be done.”

Schlow tends to get more involved in menu development at his Italian restaurants because that’s where his culinary heart is. He even takes employees to Italy once or twice a year, he said.

“We’ll rent Airbnbs so we can cook there,” he said. “We’ll find either some restaurant or a home cook that will let us cook with them. Those things all lead to great inspiration, and bringing young chefs who might not have been exposed to that kind of food before, when you go to the source, how can you not be inspired by that?” Italian cuisine centers around sourcing great ingredients and letting them speak for themselves. To translate that to the East Coast, he imports some ingredients — canned San Marzano tomatoes, olive oil, Parmigiano-Reggiano cheese — but seafood local to the Amalfi Coast — squid, clams, mussels — is available in New England, too.

In that way, his approach is similar to the Italian way.

“They cook what they see; we cook what we see,” Schlow said.

And sometimes as a chef, you have to learn not to let your own ego get in the way of a great dish, he said. Spaghetti and clams at Alta Strada

“I had worked for somebody a long time ago who had asked me a rhetorical question about a dish that was on our menu,” Schlow said. “I was a young cook who wanted to put my mark on everything … [My boss] said, ‘How are you going to improve the rigatoni dish?’ And I launched into this well-rehearsed speech: ‘Oh, I’m going to do this …’ He goes, ‘You misunderstood my question. How are you going to improve this rigatoni dish when it doesn’t need you to do anything to it other than to repeat it at the highest level? Sometimes food doesn’t need your creativity. Sometimes the best dishes just need you to recreate them perfectly if you can.’”

Back at The Riggsby, much of the food is just that: shrimp cocktail; pâté with grain mustard and cornichons; grilled octopus with olives, tomato and garlic.

Schlow said he tells chefs there that 60 percent of the menu should be the best version of the classic. For the rest, they should look at the ingredients of classic dishes and figure out what to do with them.

For example, veal Oscar is flattened, sautéed veal with crab meat, asparagus and béarnaise sauce. Instead, the chefs took veal neck and made a roulade with King crab legs, tarragon parsley breadcrumbs and grilled asparagus. The dish is served with a celery root purée that mimics the texture of béarnaise sauce.