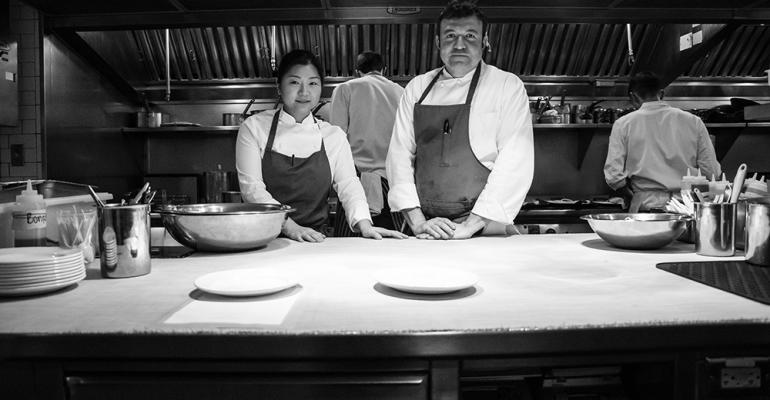 If you want to run the best — and possibly the only — restaurant in the country serving the cuisine of the Italian region of Friuli, it makes sense to hire some of the only chefs in the country who have spent a substantial amount of time working there.

That’s what the owners of Frasca Food & Wine in Boulder, Colo., did when they hired Kelly Jeun and Eduardo Valle Lobo as co-executive chefs in December.

The 14-year-old restaurant by chef Lachlan Mackinnon-Patterson and sommelier Bobby Stuckey has won pretty much all the local and national awards available for food, wine and service. Jeun and Valle Lobo are now tasked with upping Frasca’s game by bringing the restaurant’s green but enthusiastic back-of-house staff up to the standards the two chefs learned in New York City and Italy. Frasca Food & Wine offers cuisine from the region of Friuli in northeastern Italy.

Jeun and Valle Lobo met and eventually fell in love when working at Del Posto, part of B&B Hospitality Group, and the only Italian restaurant in New York City with four stars from The New York Times.

“I was working the meat entremets station,” Jeun said, preparing the accompaniments to meat dishes, “and he had come on and started on the meat roasts, and that usually means someone is very experienced and knows what they’re doing.

“I thought I knew something because I graduated from culinary school, and I really knew nothing, and I really resented the guy for starting on that station,” she said. “But I clearly saw his work ethic and discipline and knowledge and skill, and it just turned into a respect for him. And Eduardo always says, ‘Love and hate is a very fine line.’”

The two, already a couple, were reunited in the kitchen in 2013, when the Bastianiches asked them to open Orsone, a 10-table restaurant on the grounds of the Bastianich family winery in the Friulian town of Cividale del Friuli, in northeastern Italy, near the Slovenian border. “We hadn’t even known about Friuli,” Jeun said, “and a lot of Americans we met in Italy were like, ‘Hey, we’ve been to Italy 13, 14 times,’ and it was their first time in Friuli.”

She enjoyed the locale, which was relatively untrammeled by tourists, and Valle Lobo said he appreciated that Friulians knew how to make simple ingredients taste great.

“It’s easy to make a langoustine with caviar taste good,” he said. “But Friuli was a really poor region. They learned to work with very small resources, so the most typical dish is a bean soup called jota, which is a bean soup, with brovada, a kind of pickled turnip fermented with grape skins. It’s very simple, very traditional, and it’s our signature dish.”

They fancied it up a bit (pictured above) for Frasca, using two types of beans from Rancho Gordo in Napa Valley, Calif. — a variation on the cannellini bean named the “Marcella” for legendary Italian chef and cookbook writer Marcella Hazan — and a black-and-white bean called “vaquero,” or cowboy.

The two types of beans are cooked separately with a sofrito of tomatoes, olive oil and garlic. The lighter bean is plated first and then the vaquero is spooned in the middle. They then make a quick brovada by sautéing diced turnips with garlic and shallots, adding red wine and red wine vinegar and simmering it.

The food strays a bit out of the region, whose full name is Friuli-Venezia Giulia, for inspiration. For example, their bigoli pasta is inspired by a dish made by Lidia Bastianich from her home region of Istria, a peninsula that juts into the Adriatic Sea and is now part of Croatia, although Jeun and Valle Lobo said similar preparations are also made in Friuli.

“I saw Lidia do a lobster pasta that would feed a family of four — with one lobster,” Jeun said, using the spiny lobsters of the Mediterranean.

“She basically extracted all the flavor out of the lobster, and it was so soulful,” she said.

Jeun emphasized her and Valle Lobo’s understanding of traditional Friulian dishes from their time living and working in the region.

“With our experiences, you can really riff on that,” she said. “Once you understand a classic dish, you can then go ahead and take your spin on it.”

Now working at a fine-dining restaurant in the western U.S., Jeun and Valle Lobo make their bigoli with Dungeness crab (above).

The crab is steamed, the tomalley is pulled out and reserved, and the meat is picked under an ultra-violet light to make sure all shell fragments are removed. The tomalley is then emulsified with olive oil and the shells are used to make a light broth.

The pasta is rolled by hand and boiled, while garlic, scallions, Aleppo pepper and tomato are sautéed with olive oil. The crab broth is added to the mixture, then the pasta, and at the last second the tomalley emulsion “that gives it an oceany, creamy flavor,” Jeun said.

“Sommeliers really like to pair it with some Malvasia, which is a typical wine of the area,” Valle Lobo said.

While interpreting the food of the northern Adriatic, the couple is also training their staff.

“We have a lot of green staff, which is great because they’re very open and really want to learn,” Jeun said. “That’s the most we could ever ask for.”

Teaching the cooks is part of her mission.

“Part of doing our style of food is definitely trying to teach the people our ways and stressing the foundation, like, how do we put the vegetables away? How do we work? It’s not just making the beautiful plates, obviously, but teaching our staff how to work, and then we can go from there,” she said.

“Basically, we started with explaining our philosophy,” Valle Lobo said. “We try to bring some of the standards that we learned in New York City and Italy here to Colorado.”

That can mean anything from classic pasta-saucing techniques, such as adding some of the pasta water to bring a dish together, to keeping stations clean and paying attention to ingredient quality.

“[It’s not enough that a fruit or vegetable looks good; it also has to taste good,” Valle Lobo said.

Jeun said she finds the positive attitude of her staff refreshing.

“These are all really good kids,” she said. “I think the best word I could use to describe them is ‘chipper.’ They’re just eager to learn. They all show up on time and have good attitudes.

“I think it’s part of the Frasca mentality,” she added. “We hire based on people and not necessarily — okay, it’s great that you have a lot of experience at XYZ, but what I really care about is who you are as a person and how you mesh with the team. We’re all kind of roommates here.”