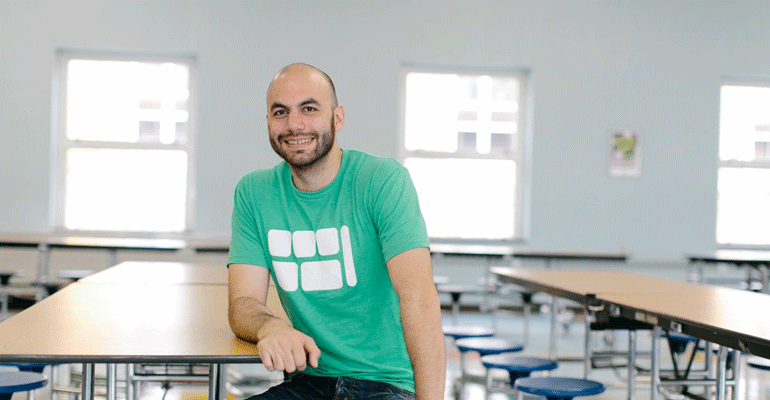 Noted chef’s Brigaid organization will be taking over six school kitchens in the Bronx this fall.

In 2016, Dan Giusti took the culinary world by surprise when he left the fine dining world for the world of school food. Giusti is the former executive chef at Noma in Copenhagen, which is widely considered the best restaurant in the world. At Noma diners frequently spend over $300 a meal, while the federal government budgets $1.25 per meal for students in public schools.

Giusti and his organization, Brigaid, faced a healthy amount of skepticism in the beginning. But after two years of successful school lunches in the New London school district in Connecticut, some of the doubters have been quieted, and Giusti is ready to bring his plan to run school cafeterias more like restaurants to a handful of schools in the biggest city in the country—New York. “It's a little scary,” Giusti said while discussing expanding Brigaid to the Bronx at the beginning of the 2018 school year.

“New York City is under a microscope, and as we've come to find out, no matter how hard we try, and no matter how good the work can be, there's still a lot of people who don't necessarily see the importance of this work and will always criticize it. We have to be ready for this. And I'm sure there's no question it will happen in New York where somebody will question why are we doing this? What's the need?”

As Giusti sees it, all students need real, wholesome food that’s good for them. And it should taste good too, and that’s where Giusti’s team of chefs comes in. Each school Brigaid works in is staffed with a professionally trained chef. Meals in the New London schools have included barbecued chicken and cornbread, and meatloaf and crispy kale. “The chefs make the whole thing turn,” Giusti said. “The chef is in charge of the school, and they're to run it like they would, say, a restaurant. The food is one aspect of it, sure, but I think maybe more important is that they're really the leader in their ability to form relationships with the students, the staff of the kitchen, the administration of that school. Getting buy-in for this program is huge. I think you could make the best food that was ever cooked in a school tomorrow and that doesn't mean anything, doesn't mean the kids are going to like it, doesn't mean the staff is going to want to prepare it.”

These chefs need to have a certain “character to navigate what is a very difficult situation that they're coming into,” Giusti said. And finding the right chefs has proven to be surprisingly tricky. While Giusti expected the nutritional guidelines and budgetary limitations on school food to be a challenge, he did not expect to have trouble finding chefs. After all, the hours are much better than at a restaurant. In restaurants, chefs are frequently cooking for themselves, Giusti explained. But in school kitchens, they need to think of what kids want and what can feasibly fit into the budget and nutritional restrictions. That might mean simpler dishes and brainstorming new dishes with federal dietary guidelines in mind.

“You really start to change the way you think about cooking,” said Giusti. “And I think the biggest challenge and the biggest surprise is how difficult it's been to communicate this idea of what we do and what it means to other chefs to get them to join us. One of the biggest struggles we still have is finding the right people for this job, and I think we still are attracting a lot of people that are just looking for a job where they don't have to work weekends or holidays, rather than a job that is going to be very challenging and where they really want to make a change.”

Now, Giusti is working on finding chefs for the six schools Brigaid will start serving food for in September. He plans to approach these new schools in the Bronx in a way similar to his work in New London. Both required him to serve six schools and a little less than 4,000 students, although, in Connecticut, he was serving the whole district while in the Bronx, the six schools are just a fraction of the district. One in four New London students are under the poverty line while the Bronx is also a high needs area.

Once the chefs are in place, working within the federal guidelines for school nutrition and within a budget of about $1.25 per meal is challenging, but also rewarding, Giusti said.

“As a chef, regardless if your budget is $1.25 or $5 or $10, I think inherently you become very resourceful,” he noted. “There's also something very exciting about being able to work within it. Like any kind of field that involves creativity, the more constricting you are on yourself, the more interesting results you get.”

Lettuce Entertain You Enterprises to create culinary experiences for the St. Regis hotel in Chicago
Oct 06, 2022