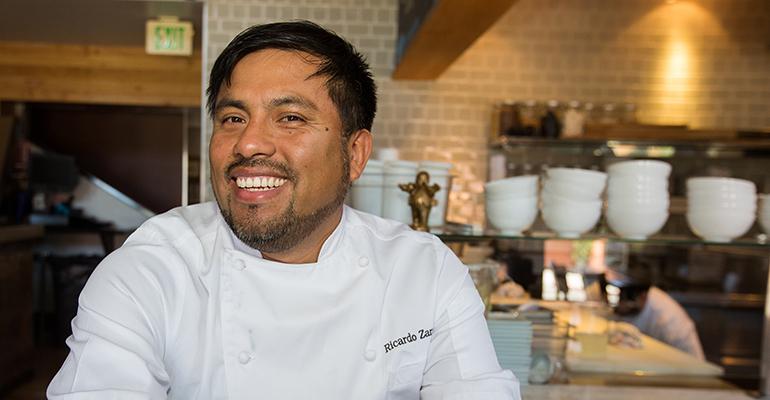 The evolution of Ricardo Zarate

The Peruvian chef based in LA gets personal with his latest restaurant, Rosaliné

When Ricardo Zarate opened Mo-Chica in Los Angeles, in 2009, Peruvian food was pretty much a mystery in the U.S. So the goal of the chef, the 12th of 13 children from a family in Lima, was to change that.

“I got the feeling when I came here, after living for 13 years in London, the people didn’t know much about Peruvian cuisine,” Zarate said of Los Angeles. “So I was very eager to bring Peruvian dishes into these menus — the ceviches, the anticuchos, the carapulcra, dishes like that.”

Soon Angelenos were learning to appreciate the marinated fish (similar to Mexican ceviche), skewered beef hearts and pork stews of Peru, as well as other dishes from the country’s extraordinary culinary repertoire.

Arguably more than any other Latin American country, Peru has created a rich cuisine from its history by incorporating dishes of the Incas and their predecessors, Spanish colonizers, West African slaves that the Spanish brought with them, Chinese laborers that arrived as farm workers after the slaves were freed, and Japanese who came to work on the railroads.

All of the countries of the New World were formed by waves of immigrants, and their cuisines evolved to reflect that to some degree, but Peru has done it with unusual finesse.

Zarate tried to reflect that history with the restaurants he opened. Picca, a Peruvian cantina, followed Mo-Chica in 2011. Then came Paiche, in 2013, which specialized in Nikkei, or Japanese-Peruvian cuisine. The same year, he also opened Blue Tavern, serving California cuisine as interpreted by a Peruvian.

All three of those restaurants closed at the end of 2014, shortly after Zarate separated from his business partners and began traveling the world and working on his cookbook, “The Fire of Peru.” He promoted the book with several pop-ups, and last March he opened a fast-casual restaurant called Mamacita, which he used as a sort of test kitchen for Rosaliné, which opened last June. He closed Mamacita in November.

Now that Peruvian food has a higher profile in Los Angeles, if not yet in the rest of the U.S., Zarate said he feels freer to create a cuisine that’s more personal.

“Rosaliné is more of a compilation of all of what I did in my career and my life, by living in Peru, being in London and especially now nine years here in Los Angeles,” he said. “It has the base of Peruvian, but the influence of that culinary journey.”

Rosaliné is named after Zarate’s mother. He learned to cook by helping her and his grandmother in Lima before attending a local culinary school. He then moved to London and worked at modern Japanese restaurants such as Zuma, as well as those specializing in European cuisine, before moving to Los Angeles. Zarate’s journey is reflected in dishes such as Rosaliné’s Chaufa Paella, priced at $42 for two to three people or $84 for four to six people.

Instead of stir-frying the rice in a wok, Zarate brings his own flair by cooking it in a Spanish paella pan on a charcoal grill.

Solterito, priced at $18, reflects his experience in California and is traditionally a dish of fava beans; choclo, a giant-kernelled Peruvian corn; local cheese; olive oil and avocados.

Although he uses imported choclo in the dish, he acknowledged that California has “amazing vegetables,” and incorporates local lima beans and other produce, such as blistered tomatoes and feta cheese.

“I make all these salads that look really fresh, and these local ingredients make it happen,” he said.

Zarate picked up more inspiration while traveling throughout Asia and South America to research his book. In Colombia, he got the idea for his Lomo el Trapo, an off-menu special priced at $78 and intended for the whole table to share. “I went a lot to Colombia,” he said. “I found South Americans have similarities in their techniques.”

A Colombian way of cooking of beef and a dish that Colombians and Peruvians share called “chita a la sal” merged in Zarate’s mind for the Lomo el Trapo.

Chita a la sal is a dish for which fish is coated in a thick layer of salt and then roasted in the oven. The salt casing is cracked open and the succulent fish trapped inside is eaten.

The dish isn’t unique to Peru: Sicilians coat sea bass in salt, for example, but Zarate uses filet mignon. First, he seasons the beef with a traditional Peruvian blend of turmeric, cumin, pepper, rosemary and garlic; coats it in salt and wraps it in cheesecloth. Then he hangs it over the open flames of a grill to dry.

“It’s like a tomb,” he said of the salt casing.

Once it’s dry, Zarate drops it directly into the fire. Then he breaks it open, “and it’s the most incredible experience,” he said.

Now that Peruvian cuisine is better known, Zarate said the future of the cuisine is America will be driven by the innovations of the chefs who are cooking it.

“We change and we evolve in our career,” he said. “I feel like Rosaliné is my interpretation of Peruvian cuisine. That sounds a little bit selfish, but that’s the way I see how Peruvian cuisine is going to grow.”