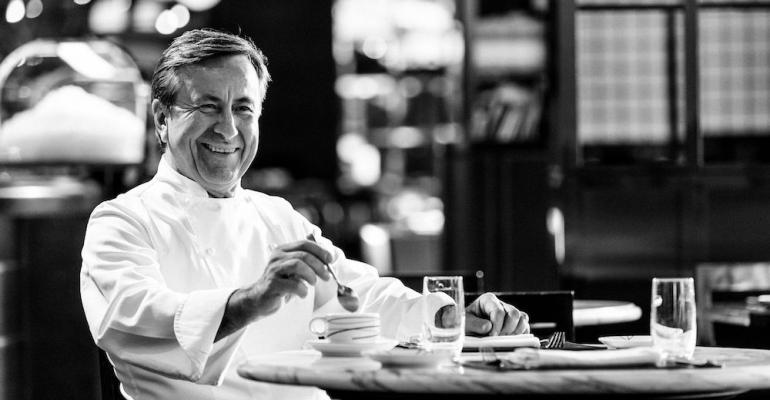 Did you know that the French tasting menu, or degustation, was inspired by the Japanese omakase?

“In the early ’70s, every restaurant had at least two Japanese working for free, for years,” said Daniel Boulud, the New York City-based chef, restaurateur and mentor, recalling his early years as a young cook in France.

Those Japanese cooks — sent by restaurants, hotels and culinary schools to study the ways of the French — didn’t just bring their learnings home to Japan, Boulud said. They also taught French chefs their Japanese aesthetic.

The elegant, small-portioned and beautiful presentations of the Japanese — particularly in their multicourse omakase meals, in which the coursing and plating are dictated by the chef — were a contrast, “versus the Pantagruelistic feast of the French, with the food and platters and all that,” said Boulud, referring to Pantagruel, the gluttonous giant of 16th century French literature.

“Omakase was more designed for the plate … with the wine pairings, and I think there was a chance for the chefs to be able to express their creativity and talent through a multicourse meal.”

The chefs of France were ready to embrace that kind of radical change in perspective: The gastronomy of the nation was in the throes of what was called La Nouvelle Cuisine. The traditional dishes codified by Auguste Escoffier at the turn of the century were being modified by chefs like Fernand Point and Paul Bocuse, who were creating their own dishes to the shock and delight, and sometimes horror, of the French dining public.

Soon the complex preparations fed to the French aristocracy were replaced by simple dishes, such as a salmon fillet cooked right before being served with a little sorrel sauce.

That’s the world that Boulud joined at the age of 14, when he started cooking in a Michelin two-star restaurant in Lyon, France, and he has tried to continue that approach — creativity with respect for the ingredients — at the dozen-and-a-half restaurants he now has, mostly in New York but also in Boston, London, Miami, Montréal, Singapore, Toronto, Washington, and Palm Beach, Fla.

“There is a lot of creativity, but a lot of careful combinations [that are] respecting the ingredients, respecting the flavors, the layering … It looks simple but it’s very complex,” he said.

Now celebrating his 40th year in the United States, the roster of American chefs who have trained under him is staggering, starting when he was chef de cuisine at the Polo Lounge in New York in the mid-1980s.

“In that kitchen we had Thomas Keller, we had Alfred Portale, we had Bill Yosses…,” Boulud said.

David Chang and Rich Torrisi are among the chefs who passed through his kitchens, and his second and third restaurants, Café Boulud and DB Bistro Moderne, became training grounds for chefs who were destined to win the James Beard Foundation award for Rising Star Chef, which goes to someone aged 30 and younger. Andrew Carmellini and Gavin Kaysen, who were the chefs at Café Boulud, won that award, as did Jean-François Bruel of DB Bistro. Carmellini and Kaysen went on to build their own restaurant empires; Bruel was soon made executive chef of Daniel, where he is to this day.

“When we talk about mentorship and giving the opportunity for the talent to rise and learn … I think I’ve done my share,” Boulud said with a smile.

He said that comes from building relationships with his chefs so he can work with them and trust them to put their own dishes on the menu.

He said the menu at Café Boulud in New York is particularly apt for giving chefs a foundation from which to express their own creativity. It’s divided into four parts: La Tradition, for traditional French dishes; La Saison, featuring seasonal items; Le Potager, a vegetarian menu that has been available since the 1990s; and Le Voyage which allows chefs to bring in an international influence.

But there are some flavor combinations that Boulud brings back year after year, such as his salad of peekytoe crab with apple and celery that is great for the fall and winter, starting 26 years ago.

“We have done it in so many different ways,” he said. “Sometimes it’s an apple and celery gelée. Sometimes it could be an apple broth. We make also a cider gelée with some poppyseeds  … and the celery can become a rémoulade [or] it can be very crunchy.” Sometimes he adds tarragon in oil, or as a pesto, or as a foam.

“Every time it’s a different experience for the dish, but the combination, we live by,” he said.

Boulud is not remotely done with mentoring chefs, nor with opening restaurants.

He is a co-founder, with Keller and Jérôme Bocuse, of the Ment’Or Foundation, originally established to coach American competitors in the Biennial Bocuse d’Or competition in Lyon, where Americans have traditionally faired poorly. That has since changed, and in 2017 Mathew Peters won the gold medal for the United States at the competition.

But Boulud said that he and Keller agreed that they should support chefs more broadly, “not only for the exclusive three chefs who are doing the [Bocuse d’Or], but more about other young talent who are rising into our kitchens, or other kitchens all over America.”

So the Ment’Orship program has spent more than $2 million on grants for 150 cooks to take a three-month stage in a restaurant of their choice while their expenses are covered.

“The kids come back with amazing stories about their stages and how it changed their lives,” he said.

Meanwhile, Boulud has signed a deal to open a restaurant on the second floor of One Vanderbilt, a Pantagruelistic skyscraper, 1,401-feet tall, being built next to New York’s Grand Central Terminal.

It will have around 100 seats, plus enough private-dining space for 40 people and a separate table in the garden. Beyond that, details of the restaurant, slated to open in late 2020 or early 2021, are still sketchy.

Boulud has picked a name, but his lawyers are currently doing their due diligence to make sure they can use it.

Nonetheless, Boulud said it won’t be named after him.

This story is based on an interview with Daniel Boulud that will be the first in an In The Kitchen audio series, coming soon to wherever you get your podcasts.