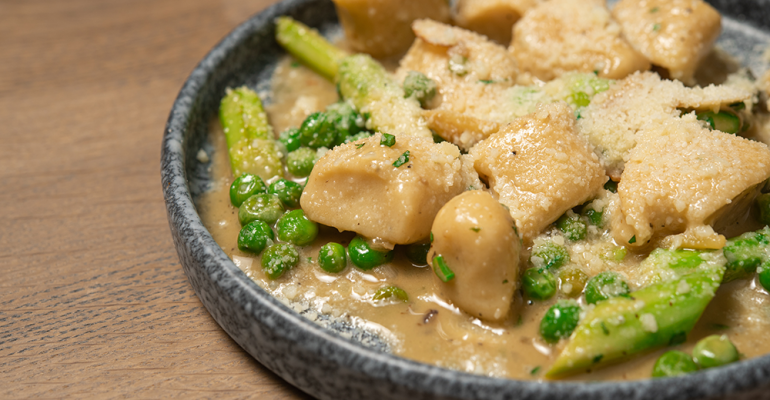 Comedy club’s food is no joke

Harold Villarosa strives to rev up the menu at The Stand

And he might fail. The chef is overseeing the reopening of The Stand, a comedy club with serious food, near New York City’s Union Square.

The Stand had a seven-year run at a nearby location until it closed in June of 2018 (the owners said at the time that they’d outgrown the space). It had always had more grown-up food than you’d expect at a comedy club, with dishes such as Peking duck pizzette, tuna tartare cannoli, chicken paillard and a vegan pesto portobello burger — as well as the burgers and fish & chips that you might expect.

Villarosa has been hired to up The Stand’s food game even more, and owners Cris and Paul Italia are helping him do that by installing a brick oven and rotisserie in the new location’s open kitchen, and by pretty-much giving the chef carte blanche to do what he wants. 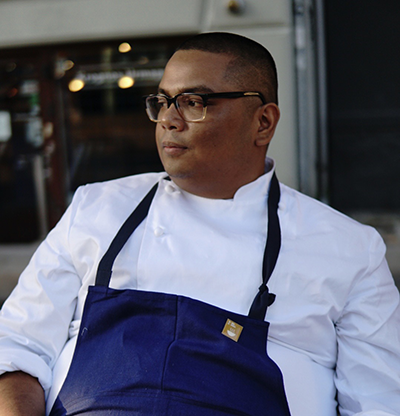 “Nobody’s really tripping,” Villarosa (left) said as he paused to chat while a lamb roulade stuffed with parsley, rosemary and garlic and a porchetta rubbed with ginger, shallots, lemon grass and garlic were turning on the rotisserie. “The owners are super open to all of it, but it’s kind of scary, too, because I like to eat pig brain and tongue and stuff like that.”

There’s no pig brain on the opening menu, but there are Japanese-style chicken skins, charred on a skewer and served with ponzu dipping sauce. There’s also a smoked mussel tartine with curry cream and fennel fronds, and rotisserie duck with inasal sauce — a Philippine sauce of annatto and citrus — mint, cilantro and Philippine style-pickled vegetables.

There’s also pizza, a burger and waffle fries, of course.

Villarosa lived in the Philippines until he was 8 or 9 years old, and then moved the South Bronx in the early 1990s.
“The Bronx was still burning a little bit,” he said.

As far as he could tell, he was the only Filipino for miles around, which meant he got jumped a lot in junior high, since he didn’t have a group of his own to hang out with.

“It was a ride for sure,” he said. “It gave me the grit and resiliency that I guess all New Yorkers are born with.”

He got his first restaurant job in 1999 in a Manhattan McDonald’s, which opened his eyes to the possibility of earning a living from cooking. He went on to work at Starbucks, Burger King and, probably his favorite, White Castle.

“I used to bring Crave Packs back to the block and chicken rings and all that stuff,” he said. And the job itself involved doing battle with the derelicts near what at the time was a pretty scary part of Manhattan’s Hell’s Kitchen neighborhood.

“That was fun memory, messing with the crack heads,” he said.

After high school he took up a friend’s invitation to move to Provo, Utah, where he stayed for seven years, including two semesters as a student at the Mormon college Brigham Young University.

Steak, rotisserie porchetta and chicken dishes at The Stand.

“I was a minority, so they gave me all the minority plusses and stuff,” he said. But it wasn’t meant to be.

“Smelling like weed sitting at the front of religion class — it wasn’t a good look,” he said with a laugh.

He ended up answering an ad on Craig’s List to work at Discovery Academy, which works with troubled youth.

“These rich white kids get sent to boarding schools and they have, like, ADHD or whatever,” he said. “So I was their counselor. I’d have to put them in, like, four-point holds and all this crazy shit. They were buggin’ out. I think they were just too rich. They had some mental problems, for sure.”

It turned out that Villarosa had an aptitude for mentoring troubled people, who he found tended to gravitate toward him — a good skill for anyone running a kitchen.

The call of the kitchen summoned him again, and he ended up working in Mexican, Polynesian, Chinese, Peruvian and other restaurants in California before returning to New York City to do some more failing.

After trying 9-to-5 jobs that didn’t work out and making sandwiches at Pret à Manger for a while, he enrolled at an inexpensive culinary school whose students were mostly transitioning out of prison or otherwise in need of help. He went from there to a tony Upper West Side restaurant called Ouest.

“I learned how to get screamed at by a real French chef,” he said — something he considered an important skill — and then was fired after a few months for not being able to keep up.

“While I was still at Ouest I planned my next five years of where I wanted to go,” he said. “And I kind of just tied my shoes and pulled up my pants and really got into the mix.”

He worked at high-end restaurants including Aureole, Rouge Tomate, Rayuela and Aquavit, and managed to squeeze in there a three-month stage at the cutting-edge Copenhagen restaurant Noma.

Villarosa attended a talk at the New York Public Library that included Noma chef René Redzepi, and at the end of it he asked Redzepi how he could work for him.

“He said, ‘I can’t say no to you in front of my friends,’” Villarosa said. So he saved up his money and moved to Copenhagen.

“I didn’t have money for food, so I would vacuum pack family meal and eat it on weekends,” he said.

“That really opened my eyes to food,” he said, including taking a philosophical approach to it and paying attention to the local and global implications of what you cook and serve.

He came back to New Yok and became kind of a Forrest Gump of the New York restaurant world — showing up and cooking wherever interesting things were happening. He worked with chef Seamus Mullen at Tertulia as the Spanish tapas movement accelerated. He was on the opening of Bâtard with Marcus Glocker, which was the city’s hottest restaurant the year it opened. He consulted with Noma owner Claus Meyer on a corporate space in Midtown Manhattan, and he also landed his first executive chef gig at Freeman’s, a cool, popular restaurant on Manhattan’s Lower East Side.

Villarosa said he was skeptical when the Italia brothers approached him about cooking for a comedy club, but then he sat down with them and they discussed how people don’t just go out to spend money on food and drink: They want a whole experience.

“And I’m like, ‘You know what? That’s going to be lit,’” he said. “It’ll be a new level of food that will hopefully change the mindset of comedy clubs. Instead of degrading people — ‘Oh, you have to pay a two-drink minimum and buy an appetizer,’ — why don’t you just do good food so people want to eat and drink?”

The menu is a work-in-progress that Villarosa is developing with the other cooks as well as the front-of-the-house staff.

“They get to criticize and tweak here and there,” he said. “That’s just me saying, ‘No ego in this whole thing,’ and them getting empowered to sell the product. They’ve got to sell it, and if they like it and they have verbiage behind it, then everybody wins.”

The Stand has a restaurant and private room on the ground floor, and guests walk by the open kitchen to get to the comedy club in the basement, where special dishes will be served such as crispy cauliflower with shishito peppers and fermented shrimp aïoli, and grilled sardines with fennel salad, citrus supremes and pistachio pesto.

He and the owners have talked about doing some social media with the comedians — maybe video clips of them trying to cook, or just eating his food, or engaging in chef-comedian banter.

And if comedy fans aren’t interested in the food, well, failure’s part of the business.

“I’m not into the stars and glory of it all. That doesn’t make sense to me,” he said. “For people to be better and achieve anything you’ve just got to go for the failure.

“I’m just really excited to be part of this frontier.”

Heirloom Hospitality’s Jeremy Sasson on meaningful growth and change in Detroit and beyond
Jun 15, 2021

Chefs on the Move: Springtime appointments at hotels and restaurants across the country
Jun 15, 2021