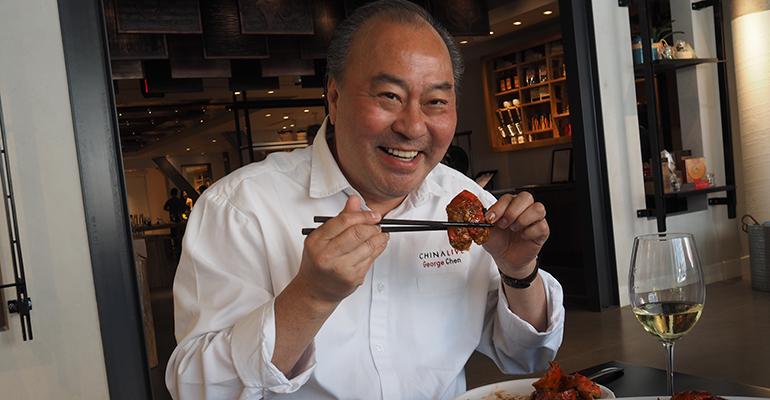 George Chen has spent most of his adult life working to elevate the image of Chinese food in the United States, and he’s doing it again with his latest venture: China Live — an Eataly-style marketplace and restaurant complex in San Francisco that has been opening in stages since March.

Market Restaurant also features an array of cold plates that traditionally make up the first course of a Chinese meal. Recent cold dishes, for example, have been yuba, or tofu skin, with mushrooms and chile, and crushed local lemon cucumber skins with chile-garlic vinaigrette.

Most items on the menu are under $20 — Chen said it’s priced at about 20-percent higher than typical Chinatown restaurants, and per-person checks are in the $30 to $40 range.

The restaurant gets much of its local produce from Chinatown vendors, vetting the growers — mostly in nearby Petaluma, Calif. — to make sure they don’t use pesticides. He said going through those vendors is faster, thus getting him fresher produce, than going through western markets that have to special order Asian vegetables. Cocktails can be had at Bar Central or the swankier Cold Drinks Bar, and private events are held at the Cold Mountain Lounge.

But the crown jewel to all of that is Eight Tables by George Chen, which opened in early October, and where Chen himself is executive chef, overseeing $225 10-course tasting menus.

China Live is Chen’s 16th restaurant. He immigrated to the United States at a young age and worked at restaurants first in Los Angeles and then, while studying at the University of California-Berkeley, he came under the wing of legendary chef Cecilia Chiang at Mandarin Restaurant, one of the country’s first Chinese fine-dining restaurants, in San Francisco.

After a brief stint on Wall Street that also required frequent travel to Asia, allowing him to learn more about the region’s cuisines, Chen returned to the Bay Area and opened Betelnut restaurant in San Francisco in 1995 and continued to open restaurants both in the U.S. and in Shanghai, China.

Even at Marketplace, Chen said he’s “taking some liberties” with traditional Chinese food. For example, for a gai lan dish with seasoned Chinese oil and oyster sauce, he grills the Chinese broccoli to give it an unorthodox char, and tosses in some non-Chinese black trumpet mushrooms.

“But my Chinese friends who come in say it’s definitely Chinese food,” he said.

Nonetheless, he has gotten some pushback from Chinese Americans who have argued that by using high-end ingredients he’s selling out to white people.

But Chen said he’s trying to educate people and get them to move beyond Chinese-American dishes like egg foo young, beef and broccoli and moo goo gai pan.

“For too long it hasn’t changed, and people saw Chinese as cheap labor and cheap food,” he said.

That wasn’t a bad thing: It provided good livelihoods for generations of people, Chen said. But just as the country of China is evolving and enjoying an economic resurgence, “it’s time that Chinese food change as well in this country,” he said.

Marketplace is his attempt to do that for the masses. And for those with deeper pockets, there’s Eight Tables.

Eight is a lucky number in Chinese numerology, and the 38-seat restaurant does, indeed, have just eight tables, each secluded from the others to allow for dinner to feel like it’s in a private dining room.

Chen describes the food as shifan tsai, which he translates as “private château cuisine.”

Chen isn’t focusing on a particular region, but is cherry picking from everywhere, and also bringing a California sensibility to it with seasonal products.

“There’s so many things that Chinese people do with food that most people have never seen,” he said. “And it’s not all weird.”

The tasting menu starts with a nine-item course of cold appetizers called the “Nine Essential Flavors of Chinese Cooking.”

Those flavors include the four tastes of sweet, sour, salty and bitter, as well as spicy. In addition, there’s ma, which is the tingling sensation caused by Szechuan peppercorns. Xiang means fragrant and Chen said that could be anything from nutty sesame oil to floral rose petal jam to truffles. Shen is the sharp sweetness of unadorned seafood. And, finally, smoky. That course is followed by fancy dumplings and a salad. Next is what he calls Chinese barbecue — in this case char siu pork made with the collar of Spanish Iberico pork, which is finished on acorns — served over fried shiso leaves, as well as crispy Peking duck skin with farmed caviar from Hangzhou, China, served on a shrimp cracker, and crispy pig skin served with cucumber skin.

Along with that course is compressed cantaloupe and watermelon and roasted figs with a syrup made with black vinegar, ginger and hawthorne berry.

Next comes soup, followed by Norwegian cod or sable steamed in banana leaf and garnished with fermented Armenian cucumber with soybean paste. It’s tiled, French-style, like scales over the fish.

“It brings out this wild flavor,” Chen said, adding that cucumber, which is fermented on the roof of the venue, is a traditional item in Taiwan, “but no one’s doing it here.”

Next is velvet chicken with matsutake mushrooms and burgundy truffles, drizzled with veal-stock reduction made with white Chinese miso and a little cognac.

Next comes Shanghai-style red pork with longan, jujubes and other fruits, followed by a pastry — on a recent menu it was a foie gras potsticker and noodles — and two desserts by pastry chef Luis Villavelazquez.

As a parting gift, guests are given chocolate mahjongg tiles and ebony chopsticks with their names engraved on them.

“We’re pleased with what we’re doing,” Chen said. “It’s a lot of work, a lot of effort, and I think we’re doing really well.”