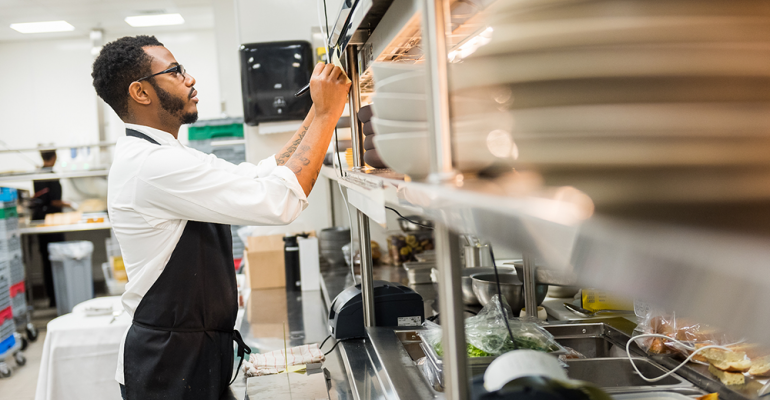 Chef Kwame Onwuachi leaves Kith/Kin to open his own restaurant

Onwuachi announced his decision on Instagram to leave the Washington, D.C.-based Afro-Caribbean restaurant as not “easy but necessary”

Chef Kwame Onwuachi — James Beard award-winning chef at the Afro-Caribbean Washington, D.C., restaurant Kith/Kin and founding member of the independent restaurants advocacy group, the Independent Restaurant Coalition — announced on Instagram that he will be leaving his position as executive chef after four years at the restaurant, calling the decision, “not easy but necessary.”

“The road has been tough, the journey sometimes treacherous, but what truly brought us joy was our ability to contribute — to make Washington, D.C., a place where those dreams can come true,” Onwuachi said in his Instagram post announcement. “A place where everyone is welcomed; where the inaudible have a voice, and anyone can be themselves.”

Although the chef did not announce what his next venture will be, he told The New York Times in an interview that the decision was not directly impacted by the pandemic and that he wants to move on to a restaurant that he owns himself. Onwuachi said that part of that plan may be to bring back Philly Wing Fry, his Washington-based cheesesteak stall, the last location of which closed last fall.

“Something that profits off of Black and Brown dollars should be Black-owned,” Onwuachi said. “It’s something that’s very, very important to me and something that I want to achieve in the future. … I’m going to cook, I was born to cook, I have to cook. But I do need to take some time to think about how to build a better future. And I need ownership to do that.”

Kith/Kin is owned by the Intercontinental Hotel Group, and general manager James Ryan said in a statement that, “We are excited for the future of this innovative, landmark restaurant and look forward to sharing more details soon.”

As a Black business owner, Onwuachi has used his platform both as a public figure and a founder of the Independent Restaurant Coalition to highlight the distinct disadvantages that minority-owned businesses have had both before and during the pandemic, an issue that has been particularly highlighted during the resurgence of the Black Lives Matter movement across the United States.

“Opening Kith/Kin was a dream, for me and for many,” Onwuachi said in his Instagram announcement. “It was a dream for the 272 slaves from Georgetown that sailed down the Potomac, leaving from right in front of where Kith/Kin stands, not knowing where they’d end up. For the 77 slaves in 1848 that were trying to achieve freedom by commandeering a ship from the wharf with the goal of equality. A dream for the Native Americans and Africans who met here, where these buildings stand, trading ideas and practices in order to survive. This place was for dreamers, least notably me, but dreamers who maintained faith that one day their culture would be accepted as equal and significant.”