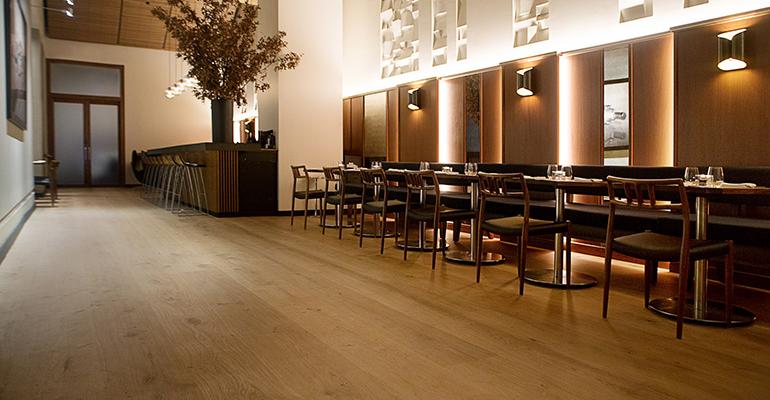 Long before the New Nordic movement burst onto the global culinary scene, even before the term “fusion” became a source of fascination and then derision in the food world, there was Aquavit. 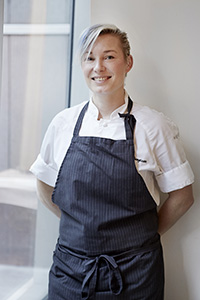 The Swedish fine-dining restaurant opened in Midtown Manhattan in 1986, and to this day it remains unlike any other dining establishment in the city. Polished and elegant with a distinctive menu that reflects the evolving cuisines of both Sweden and New York City, Aquavit remains unique, balancing traditional fine dining with modern-day whimsy while maintaining its Scandinavian roots under the watchful eye of owner Håkan Swahn.

The restaurant is probably best known for launching the career of chef Marcus Samuelsson, who surprised and delighted diners with dishes like curried herring that seemed so adventuresome at the turn of the century.

Related: It ain’t easy being truly seasonal here, but this chef does it

Samuelsson parlayed his stardom at the restaurant into a broader career, and was replaced in the kitchen by a series of talented Swedish executive chefs: Nils Noren, Johan Svensson, Marcus Jernmark and, finally, in 2014, Emma Bengtsson, who took that position of spring of that year. By that October, Aquavit was awarded two Michelin stars. 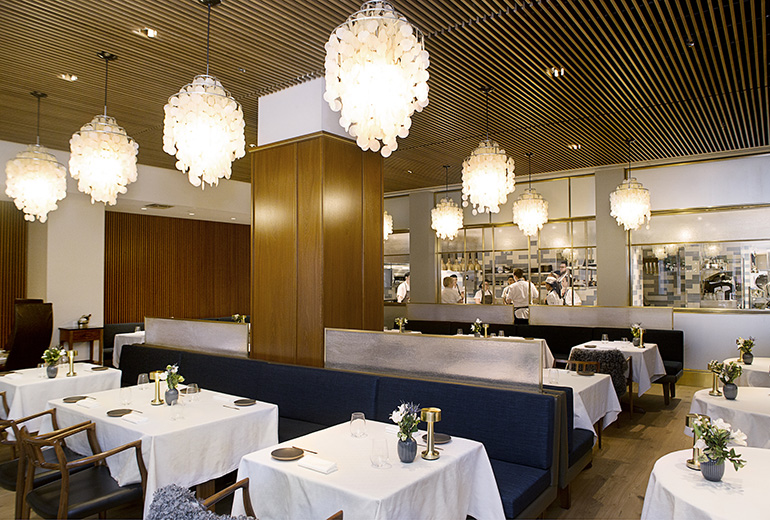 She and Swahn recently reopened Aquavit in late October after a four-month hiatus in which the restaurant was remodeled, most notably with a newly exposed glassed-in kitchen, but also with a new casual lounge where snacks and traditional-but-elevated husmanskost — or Swedish home cooking — is served.

One of those items is fermented mini sausages made from barley mixed with spiced pork and a little beef. All of that is put in sausage casings and fermented for 24 hours. Then they’re cold-smoked, and then baked. At service, they’re seared to order and served with whole-grain mustard.

“It comes out looking super-simple, but there’s so much work behind them and they taste amazing,” Bengtsson said.

The menu and service style in the main dining room also have changed. Lunch used to be all husmanskost, but now it’s just a slightly smaller version of the dinner menu. Lunch guests have a choice of six appetizers and six entrées, and they have seven choice for each at dinner. Lunch is a prix-fixe meal of two, three or five courses — for $65, $75 and $135, respectively, and at dinner guests have a choice of three, five or eight courses for $115, $155 and $225.

A native of the town of Falkenberg on Sweden’s west coast, Bengtsson was an avid athlete as a child, competing in gymnastics until she was 14 and in horseback riding until she was 18. Although she saw food as a possible career path when she started taking cooking classes in school at around age 13, her heart was set on joining the Swedish armed forces to become a fighter pilot.

But you can’t join the Swedish military until you turn 18, so she went to culinary school in the meantime, and in her third year got an internship at Edsbacka, a restaurant outside of Stockholm. That’s when she fell in love with restaurant kitchens and gave up on her “ridiculous plan to join the Army,” she said. 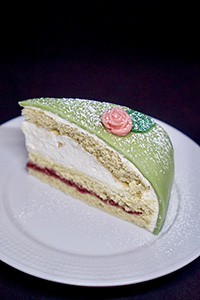 She was taken under the wing of Edsbacka’s pastry chef, and he trained her to take over once he left. “So I ended up doing pastry for 15 years,” she said.

That included four years as Aquavit’s pastry chef, a position she took at the invitation of former classmate Jernmark. But Jernmark returned to Sweden in spring of 2014, and Bengtsson was tapped to be the new executive chef.

Winning the second Michelin star was accomplished “with a lot of help from my head chef Simon Ek and my banquet sous chef Daniel Martignon.” Rounding out her core team is sous chef Daniel Lindberg.

“The three of them have been my pillars,” Bengtsson said. “I decided a year or two ago that I was trying so hard I almost was killing myself, and I decided that I didn’t have to. I’m a perfectionist, so the first year or two I wanted to be involved in all the butchering and run the line and run the pass and take care of pastry. It didn’t work anymore. So everyone now has their own areas and everything is working so great.” 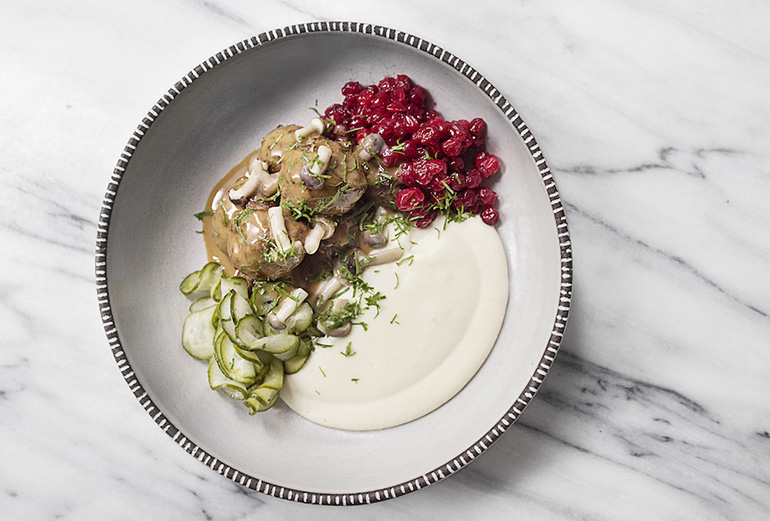 The new dinner menu reflects the seasonal ingredients of the Northeast and its waterways, and the Swedish cooking approach that Bengtsson says is the only approach she knows.

“I never trained, especially savory, in anything else. I have no idea about Italian, French, Spanish cuisine [other than] than playing at home cooking dinner for myself,” she said.

She said Swedish cuisine has always been about knowing the fundamentals necessary to survive the winter, so there’s lots of pickling, brining, curing, fermenting and smoking.

“When it comes to flavor profile, a little bit more saltiness and bitterness to everything is what we are, but we also are a sponge for the rest of the world,” she said. “Anything that comes in the country we just suck it in and kind of spit it out as something new. I remember [when I was] growing up, curry and bananas were starting to hit the scene, so all of a sudden one of our signature husmanskost was this pork casserole with peanuts, bananas and curry. We call it the Flying Jacob. If you talk to anyone in my generation about what their mom made, [that was one of the dishes].”

Aquavit’s new menu reflects that Swedish personality in the context of New York.

“This whole menu is balanced to be very straightforward, not so much hocus pocus going on. We’re focusing on the ingredients — the protein, the vegetables — to stand on their own without turning it in too much into anything else,” she said.

One of her new starters is diver scallops with chanterelle mushrooms and lingonberry. The scallops come in live and are just seared and served with seared mushrooms, a mushroom purée made from the trim of the mushrooms. It’s finished with raw sunchoke and lingonberry gelée.

Another starter is venison that seared on the outside but left raw in the middle, served thinly sliced with creamy tarragon emulsion, peppery nasturtium and Swedish crisp bread. 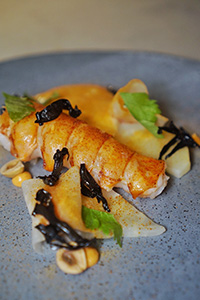 Bengtsson’s also putting lobster on the menu for the first time. She said that although lobster is a popular dish in the Northeastern U.S. in the summer, she likes them in the cooler months, once their shells and flesh have firmed up after molting.

“I don’t like to have lobster 24/7,” she said. “We want to follow the seasons of not just the vegetables, but all the seafood as well.”

She boils the tail and claws separately and then poaches them in butter to order with black trumpet mushrooms and serves them with salt-baked kohlrabi, beurre monté with roasted hazelnuts and a hollandaise made out of the lobster tomalley.

Among her desserts is a roasted oat crème brûlée with dressed with compote made from upstate New York apples, an oat tuile and roasted apple sorbet with hibiscus.

She said the new menu reflects an aesthetic of good food that looks like what it is, something other chefs have gotten away from.

“The food for the last couple of years has been so focused on taking something, breaking it down into a thousand pieces and putting it together so it looks like something else, and it’s amazing and a lot of places make it look awesome, but you don’t have to do that with everything,” she said. “Stuff that’s already delicious the way it is, if you cook it right, you use the right ingredients, you don’t have to do much else.”