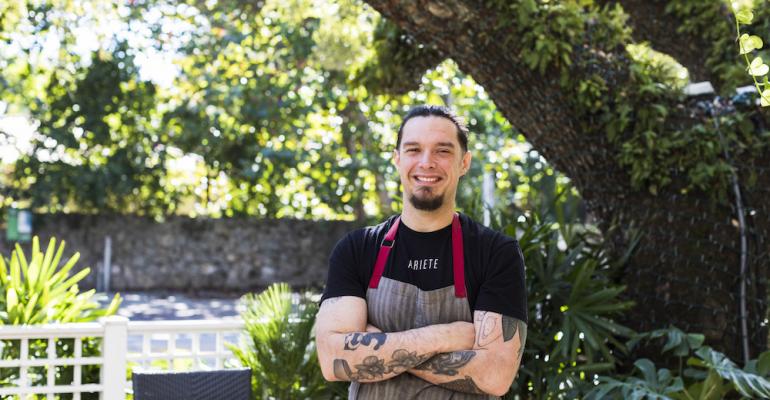 At the new restaurant Navé, chef aims for food that’s approachable but refined

“For sure, there’s a lot more flash here than a lot of cities, but there’s a lot of substance here too,” said Michael Beltran, a Cuban-American born and raised in the Little Havana section of Miami, who was quick to defend his hometown when I implied that maybe it had more form than substance — a city of beautiful people eating tuna tartare with mango salsa while sipping skinny Mojitos.

“The types of food in Miami are endless, and it’s all very good,” he said, including Haitian, Jamaican, Nicaraguan, Peruvian and of course Cuban.

Related: Time Out poised to launch food halls across U.S. in 2019

Beltran is doing his best to make Miami’s food even better with his restaurant Ariete, which he calls “Expressionary Cuban-American” cuisine, that opened in Coconut Grove, Fla., in 2016, along with two new restaurants — Chug’s, a Cuban-American diner that he opened last summer, and Navé, a pasta-and-seafood restaurant he just opened in November in partnership with pasta maven Justin Flit.

Beltran uses the same two words over and over again to describe Navé, “approachable” and “refined.” The pasta is made in a dedicated pasta room near the kitchen, and the seafood is the best that Beltran could find from all over the world.

That includes seafood versions of European classics, such as tuna au poivre and snapper Milanese, plus fusilli with chicken liver and bucatini with bottarga.

“I think there’s still a place for bells and whistles, for sure,” he said, but not at Navé.

So far, so good: The restaurant opened to plenty of press and enthusiastic customers, and hopes are high as awards season approaches.

The “Cuban Sandwich” at Chug’s draws inspiration from the muffuletta sandwich from New Orleans as well as Miami’s Cubano.

Like most chefs, Beltran hadn’t planned on being one. Though he grew up in a family of cooks and restaurateurs, he went to Averett University in Danville, Va., to play football and study criminology. But a freshman year job as a server and bartender dragged him into the restaurant business and he never left.

After studying cooking for a year and working at Casa Juancho in Little Havana, first as a bartender and then as a line cook, he was taken under the wing of Miami culinary icon Norman Van Aken.

It was under Van Aken that he developed the first dish he put on the menu at Ariete, a preparation of foie gras and plantains based on the Cuban dish platanos en tentacion.

“You’re supposed to use really black, super-soft plantains paired with a tart caramel,” he said.

Tuna au poivre is a signature item at Navé, a restaurant Michael Beltran has opened in partnership with chef Justin Flit.

For his dish, Beltran starts with a sort of gastrique made with shallots, garlic, “a bunch of spices,” sour orange juice, sherry and vinegar. Once that’s reduced he adds smoked, soft, lightly fried plantains. He tops it with seared foie gras, Maldon salt and cocoa nibs and serves it with an herb salad.

But Van Aken had his own signature foie gras dish, “so [mine] stayed in my notebook for, like, eight years, and then finally when we opened Ariete it was the only dish that I knew for sure we had to serve,” he said.

That’s on the menu along with lots of house-made charcuterie, frequently changing ceviche based on what’s in season, two types of grilled oysters, and recently, monkfish that Beltran prepares like Cubans cook oxtail. He cuts the fish through the bone, like you would veal shank for osso buco, and braises it in red wine with brandy, sofrito and tomato. It’s served with white rice and plantains, just like his grandfather would serve him oxtail on his birthday.

“I was thinking, ‘How can I introduce monkfish to the Miami palate and [have] them be interested in it,” he said. “I’ve seen it on menus before, and it just doesn’t move.” But once he introduced his version last September, they had trouble keeping up with demand.

Now he’s introducing Ariete’s customers to pressed duck. Based on the classic French preparation, Beltran has Miami-ized it by glazing it in local sugar cane and serving it as three courses: duck consommé; glazed breast with pistachio dukkah, a duck tamale and creamed yucca; and a pain perdu with duck fat caramel and ice cream made with local tea producer JoJo.

Beltran says the tea is an oolong with rosehip and orange, “but it really tastes like Apple Jacks.”

Chug’s is billed as a Cuban diner, but Beltran borrows from other cultures, too, naturally.

“A lot of [my cooking] is inspired by food that really speaks to me,” he said. “I love New Orleans, a lot,” he added, and so he took that city’s muffuletta sandwich — ham, salami, mortadella, Swiss cheese, provolone and a distinctive olive salad — and did a mashup of it and the Cubano (roast pork, ham, Swiss cheese, pickles and mustard) at Chug’s.

He starts with a loaf of LaBrea Bakery rosemary sourdough, hollows it out and spreads the bottom with Dijonnaise. Then he adds house-made pickles, cornichons, country pâté (Beltran’s first love when it comes to charcuterie), salami, honey ham and gouda. The sandwich is pressed like a Cubano and cut into pieces, easily serving three people.

He also takes a New Jersey specialty, Taylor Ham, and introduces it to locals by serving it on Cuban bread with a fried egg, mayonnaise and fried potatoes for Chug’s signature breakfast sandwich.

“We’re just trying to help the landscape,” he said.