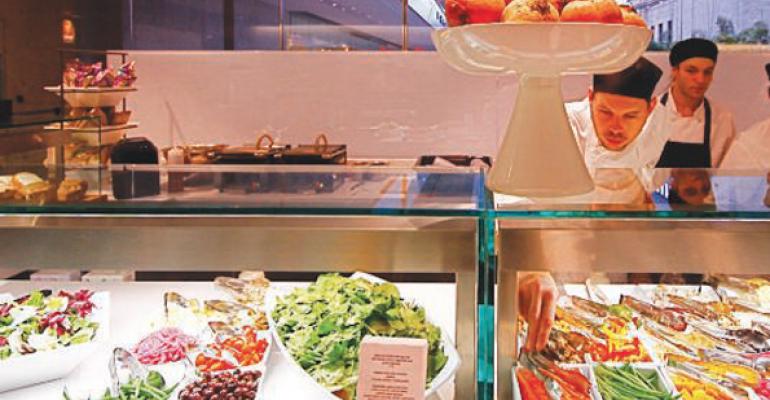 The art of the meal 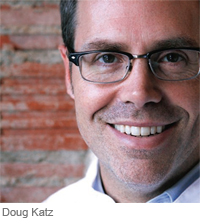 Doug Katz is a fixture on the Cleveland dining scene. Over the last decade, he has earned a loyal base of fans drawn to the locavore menu at Fire Food & Drink; before that, he spent time as executive chef at another local favorite, Moxie; and cooked at the legendary Little Nell in Aspen, CO, and Wildwood Restaurant in Portland, OR. Recently he was tapped to consult on a restaurant and café slated for a slick new expansion at the Cleveland Museum of Art. We spoke with him about creative collaboration and the unique challenges of museum foodservice.

RH: You partnered with the museum and Bon Appétit Management Company on the new restaurant and café, Provenance. What’s the back story?

Katz: I’ve been involved with Bon Appétit for a long time. I worked with them on another project, Market Café & Wine Bar (a food station-style restaurant located in the headquarters building of a local bank).

The museum sent out requests for proposals to about 20 operators. I didn’t think we could handle this on our own, as an independent, and I was about to decline. But Bon Appétit called and asked if we would partner with them. They would run the day-to-day operations and I would create the project.

RH: After your team won the contract, what followed next?

Katz: We met with the designer to create the space. The museum had a preliminary design that we looked at and worked on to fit our style. We wanted to make the cafe more market-syle foodservice and have more of a world focus, with the chefs and the equipment out front and center. The tandoor oven, pizza oven and robata grill are all central to the layout.

My role is to be the curator of the food served in the museum. So the restaurant and café are designed more like a gallery space. You can see all the ingredients, which adds beauty and seasonality. I think the more you know about the food, the better—hence the name, Provenance. The menu will change seasonally and focus on local products. 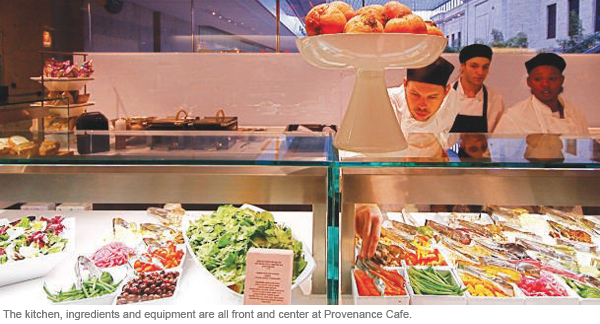 RH: Did you design the menu collaboratively as well?

Katz: There was a lot of interaction between Bon Appétit, the museum and me. There were a lot of different layers. From an independent restaurant owner’s standpoint, I’m used to going to the market and putting something on the menu that night. If something’s not working and I want to change it, I’ll do it. Not so here. People tasted dishes. I like to have that interaction. We like to get as much feedback as we can up front. There were a lot of discussions about staffing, logistics, how people get through the experience in terms of the menu, the process and the pricing. We also had to create catering menus that fit with the restaurant menu.

RH: Do you make an effort to tie the exhibits to what’s served in the restaurant and café?

Katz: The restaurant has prix fixe menus that reflect current museum events each month. This month we have a Peruvian menu celebrating the Wari exhibit. We also create drinks to go with the menus.

Museum food gets an upgrade

RH: Basically, you are open when the museum is open, which means all day and two nights a week. You must have lots of ebbs and flows in business.

Katz: Business can be overwhelming at times, but that’s good because it helps us learn. Early on we realized the signage needed some help. We added a map of the café and a menu outside the entrance to the café, so people can plan, and signs over the stations. I think signage will ultimately be the key.

RH: One clear downside to being in a museum is visibility. It’s impossible to know from the street that you are here. How do you overcome that?

Katz: I think the museum has so much programming—movies, art classes for kids, special events—that it will bring us a new audience each time. Also, because the museum wasn’t completely open for such a long time a lot of people are visiting for the first time in years.

RH: Provenance sits next to a dramatic atrium space that seems perfect for large gatherings. What’s the outlook for catering, and how involved are you?

Katz: I expect it to be huge. We’ve already had events for up to 700 and have one for 1,600 on the books. And we created the kitchen to be able to supply events.

The executive chef, Ian Thompson, worked with me at Fire for five years. We have what we called slice-and-dice meetings before events. It’s my opportunity to say “here’s how I visualize this,” and we map out the service and menus.

RH: Museum restaurants have a much higher profile than in the past. What do you think is behind that?

Katz: I think there has been a disconnect between the interest the public has in food and the museum world. Food has been offered as a service, like a bathroom or coat check. Today, people want to go to a gallery, experience the food, shop in the gift store, visit another gallery—sort of like a mall. They make a day of it.