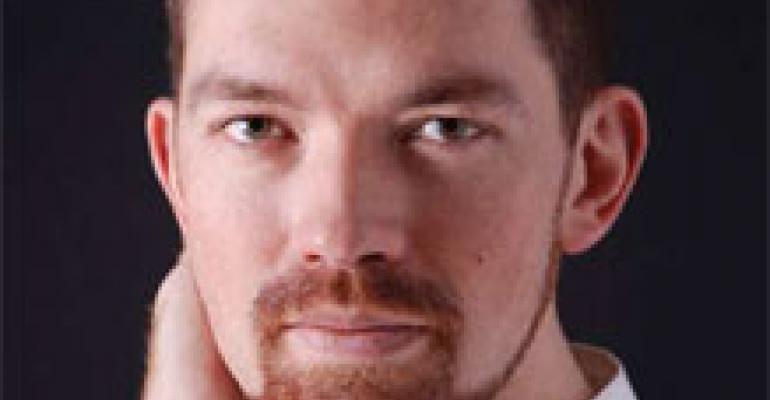 The Art of Simplicity

Giuseppe Tentori describes his cooking as simple and clean, which is not surprising for a native of Milan, Italy. Italians are reknowned for cooking with the best ingredients and presenting them simply. But Tentori now lives in Chicago, more than 4,000 miles from home, and his cooking style is nearly as far away from what the Italians describe as simple.

You can forgive him for this because he spent eight years cooking in the kitchen of Charlie Trotter, whose culinary style can be described in so many ways, but never as simple. So, what Tentori is doing today at Boka as executive chef may appear simple, especially since he has another culinary cliff diver as a next door neighbor, Alinea’s Grant Achatz, who serves menu items such as duck with a “pillow of lavender air.” What?

Tentori is no slouch in the creativity department, either. He’s getting noticed for a first course offering of squid stuffed wih shrimp and scallops, which are placed on wilted spinach and garnished with peppered cubes of pineapple and tapioca that’s been blackened with squid ink, giving the illusion of caviar. Simple? Hardly. Classic Italian? Not a chance.

Tentori describes his cooking as progressive American, which gives him the freedom to explore cuisines far beyond what he was taught at Antica Osteria la Rampina in Milan or even under Gabriel Viti, who invited the then 19-year-old to cook at his namesake Gabriel’s in Highland Park, IL. Tentori, now 34, didn’t speak a lick of English upon arriving in this country.

Having Viti and Trotter as mentors has clearly influenced his cooking style, which is highly refined and mature. Consider, for example, an entree of grilled hamachi with broccoflower, kalamata olives, pickled garlic and shrimp dumplings. It’s a dish that, if left in the hands of a lesser chef, could be a disaster, but on Boka’s menu, it sings.

Phil Vettel of the Chicago Tribune described Tentori’s cooking style as “dazzling,” and says the chef has transformed three-year-old Boka into one of the city’s best restaurants. There’s nothing simple about that.