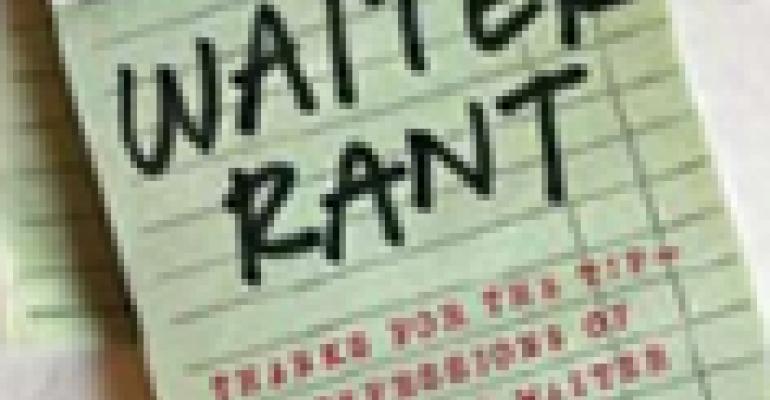 Feedback From Out Front

Michael Moore (Bowling For Columbine; Sicko) has a good thing going with his man-of-the-people approach, creating films that expose the failings of governments and corporations while also being entertaining box-office hits. Thank God he hasn't gone after the restaurant industry.

He probably never will, either, because others have beaten him to the punch. Anthony Bourdain gave the world an unvarnished view of the back-of-the-house in Kitchen Confidential, and now Steve Dublanica has done the same for the front of the house in Waiter Rant: Thanks for The Tip — Confessions of a Cynical Waiter (Ecco, $24.95). It's a book in which a full-time waiter — Dublanica worked at the well-regarded Lantera Tuscan Bistro in Nyack, NY — and part-time blogger — he runs waiterrant.net, which won “Best Writing in a Weblog” in the 2007 Bloggie Awards — tells the world what really goes in restaurants.

He spills the beans about owners, managers, chefs and the rest of his fellow workers. Only the crazy ones get called out. He does the same for customers — not the 80 percent who are good ones, but the 20 percent who don't know how to act in, or tip at, a good restaurant.

His book works so well because Dublanica isn't a just a reporter who's been given an assignment. Waiting tables was his bread and butter, and his book has a realistic grasp of the problems and possibilities working in this industry entails.

Dublanica, an ex-seminarian, waited his first table at age 31. He spent most of his career at the well-run Lantera, yet has plenty to say about how dysfunctional many restaurants can be. He's a facile and witty writer, and this 302-page book is so popular that he scored an appearance on Oprah! to promote it and it's now available — unabridged! — on audio CD (9 discs!). If you want a juicy read about restaurants, here you go.

But there are substantive insights for working professionals, too. For example, if you think the tension between back-of-the-house workers and servers is because the latter make more money, that's only partially true. Dublanica says it's time jealousy: waitstaffers make the money working significantly fewer hours. And he pegs the cause of many food safety issues not on slovenly practices, but on the fact that because most restaurant workers don't get paid sick days or have health insurance, they come to work even when they're ill.

In fact, Dublanica is staunchly on the side of restaurant workers, declaring that owners, managers and, especially, poor-tipping customers routinely take advantage of them. Which is why he no longer waits tables and has become a full-time author instead. His next book, about tipping, promises to be a Michael Moore-type look at the practice. In the meantime, we have his book to savor. Pay special attention to his list of “50 Ways to Tell You're Working in a Bad Restaurant.” Like the rest of this book, it has the ring of truth, and has plenty to say about those who own and operate full-service restaurants.

Home cooks who tackle the dishes Trotter offers here better set aside a couple of days for prep. Even when he dumbs down his leading-edge cuisine for the mass market, this ever-inventive chef just can't help himself. The recipes don't go over the top, but come very close to it — which is exactly what makes it so useful to full-service restaurant readers. Most dishes require professional technique to produce the desired result, that result being flavorful, contemporary food amenable to striking presentations. They are ideal for ambitious restaurants that don't have the time or budget to search out super-pristine or exotic ingredients. If you want to take what's already in your walk-in and turn it into something sophisticated, Trotter's your guy. Note: This is the second edition of a book originally published in 2000. It's an admirable update.

Every operator knows it's just basic business sense to have one chocolate item, if not more, on their dessert menu. And you might as well have the best chocolate desserts you can, since they drive incremental revenue, function as signature offerings and give your customers yet another reason to come back. So why not upgrade these items in 2009 by trying your hand at one of the dozens of terrific chocolate desserts renowned pastry master Payard offers in his book? He's got a knack for coming up with inventive new offerings (Chocolate Yuzu-Cream Cheese Layer Cake), breathing new life into the classics (Floating Islands in Spiced Chocolate Sauce) and making both accessible to pastry makers less-talented than himself. Go ahead and try; you know they'll sell.