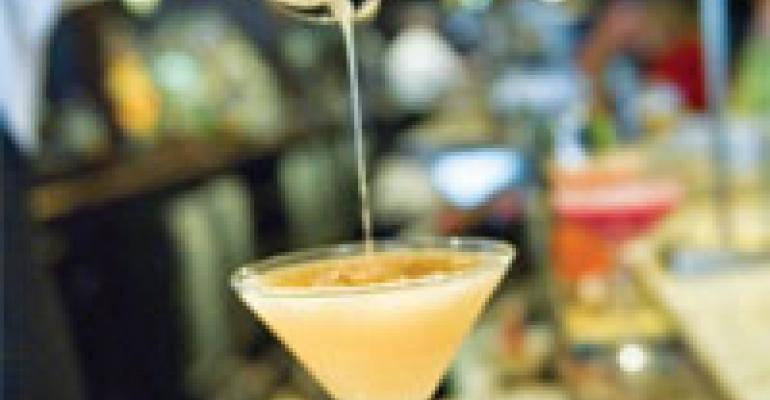 Creativity in a Glass

What's up, you may ask, with the expanding definition of sommelier that now has stretched to include smoothies, tea, beer and spirits? As wine educator Marianne M. Frantz, DWS, CWE, says, “Traditionally the French term ‘sommelier’ referred to the person in charge of wine storage, selection and service — most frequently for royals or families of privilege. That said, the job spec has a long history of branching out… Over the last few decades, America's love affair with dining out has morphed the modern sommelier into a beverage expert.” Frantz is Advanced Sommelier of the Cleveland-based American Wine School, and offers wine training in Chicago and Cleveland for restaurant service staff and managers.

Speaking of beverage experts, one bar director whose expertise has resulted in a creative cocktail program is Jackson Cannon at the award-winning Eastern Standard Kitchen & Drinks and its sister restaurant Island Creek Oyster Bar in Boston. Cannon says, “I am often asked whether I consider myself a bartender or a mixologist. …Mixology is only one discipline that top-notch bartenders practice. In fact, you can be a good bartender and not a great mixologist, and you might have the gift for making drinks and not be so good at the other aspects of enlightened service.” He adds, “I think there is an implied notion of service in the term ‘sommelier.’”

Cannon's historically accurate cocktail list features popular spirits as well as unknown ones. “Knowing the history of a cocktail,” he says, “and the histories of the time and place where it came from gives one the context in which to attempt to verify the ‘truthfulness’ of the recipe and its purported flavors and functions. Knowing how a drink evolves through different eras can inspire a reworking of a classic or an original into something new.”

Eastern Standard has received acclaim as one of GQ's 25 Best Cocktail Bars in America ( number 13 in 2010) and Esquire's The Best Bars 2010.

At Parallax in Cleveland, a recent event reversed the usual scenario of sommeliers suggesting wines to accompany customers' menu choices. At “Bring-Your-Own-Wine Night,” the first of a series of planned events, the chefs created the menu around the New World wines that customers brought along. The intention was to create a party atmosphere where participants could experience something new and meet new people. Guests were invited to provide a bottle of New World wine to share, while the chefs prepared a three-course menu to be eaten at a communal table. The cost for this friends, food and wine event was $35, including the meal and hors d'oeuvres.

The idea of a sake sommelier seems to be a natural offshoot of the popularity of Asian cuisines. At Kalu Asian Kitchen in Charlotte, NC, executive chef Bryan Emperor shares his expertise about the art of pairing sake and food. The restaurant offers a choice of nine world-class sakes. Chef Emperor says, “There are a number of ways I like to pair sake with meals, but contrary to wine, it is customary to serve the finest sake first, with the lesser-quality sake served later in the tasting.” Also, he tells patrons that pairing sake with rice or rice dishes is considered redundant. In Japan, he says, it is common to begin a meal with a cold rice beer, make the transition to sake, and then finish the meal with whiskey.

Anu Apte of Canoe Ventures in Seattle creates special moments for her guests and careers for her staff
May 25, 2021

Flavor of the week: The Michelada, where beer and tomato juice come together
May 24, 2021