ADVERTISEMENT
Meat on meat: THE WINNER

The winner was The Chicano from The Ridge in Nashville, Tenn., made with local chorizo, brisket, house-made queso, chipotle aioli and served on a Tuscan baguette with picked jalapenos.

Described as a “love letter to the guests who stuck around during COVID,” this sandwich includes smokey ham and pork belly with apple sesame slaw, gochujang mustard, garlic pickles and “gooey” provolone. It’s priced at $14.

This sandwich is the meat-on-meat trend on steroids. Weighing in at close to two pounds, the Torta Bamba has more than 15 ingredients, including ham, an all-beef frank, carne asada, chorizo, al pastor pork and chicken and beef Milanesa, along with chihuahua cheese, black beans, pineapple, pickled jalapeno, lettuce, tomato, avocado and, of course, mayo. Price: $16.75.

It looks like an Indian version of a Sloppy Joe, but it’s actually a traditional street food dish in Bombay.

This really is a rendition of a Sloppy Joe, tapping flavors from India, Pakistan and Afghanistan. It includes high-quality Keema Pav Wagyu Beef served on “gun powder dusted” buttery house-made pav bread. It’s served in a little street food cart “with working wheels and all!” Price: $12

This sandwich hit two trends: the use of mushrooms in place of meat and the return of the French dip, which is, no doubt, also connected with the rise of birria.

This shawarma is made with oyster mushrooms and served with pickled green cabbage, cucumber and onion salad, arugula and tahina in a pita. Price:

The Kingwich from Alice & Friends Vegan Kitchen in Chicago.

A breaded and crispy organic king trumpet mushroom is marinated with chef’s secret recipe to make it juice inside and crispy outside. Served with house slaw on a pretzel bun for $14.25.

The Curry Dip from Champion’s Curry in Los Angeles and Irvine, Calif.

Guests have the choice of chicken, pork, beef or fish katsu on brioche bread with gem lettuce, cucumber, tomato, Rakkyo salsa, sour cream sauce, Worcestershire and chives with a side of original or spicy curry for dipping.

This version combines black garlic, honey-roasted habanero and roasted pineapple to season the chicken thigh, which has been double brined, for a sweet-and-spicy result.

Also using the trendy chicken thigh, for this sandwich the meat is double battered and fried, then covered in gochigari garlic paste mixed with sesame emulsion and topped with a kimchi slaw on a toasted potato bun. Price: $7. 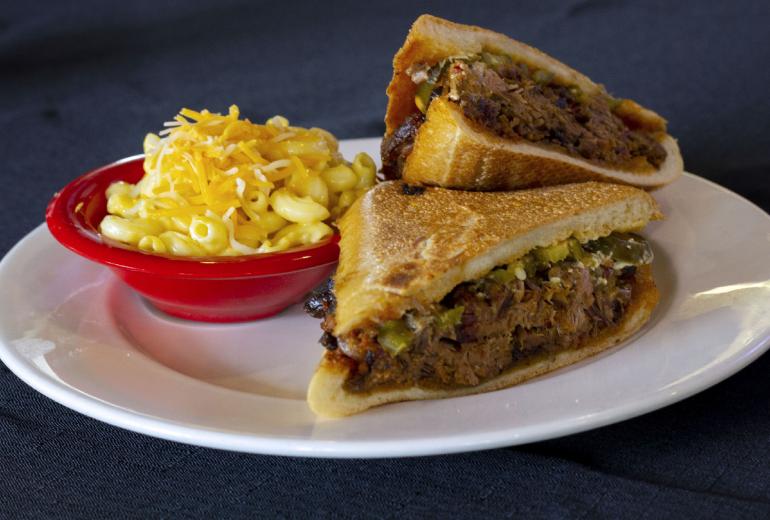 Next Up
What consumers want in a sandwich: Meat on meat; flavors from India and mushrooms
Start Slideshow ›